Why Bamboo is the Future of Asian Construction

The Filipinos believe that man and woman first emerged from the nodes of a bamboo stalk. The Chinese view the cane as a symbol of their culture and values, reciting “there is no place to live without bamboo”. The plant is a symbol of prosperity in Japan and friendship in India. Along with myths and stories, strong structures made of bamboo flourished in pre-modern Asia. Built forms varied across the changing landscapes of Eastern countries, all sharing one aspect in common – a respect for natural ecosystems. 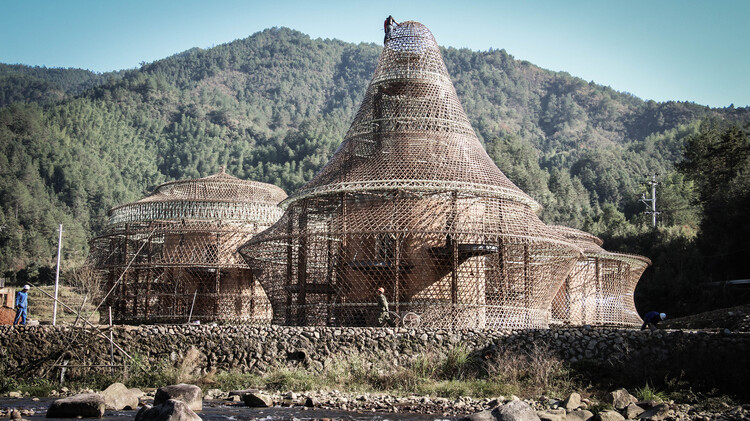 In 21st-century Asia, bamboo structures are prevalent, although uncommon when compared to synthetic edifices. The plant is native to a wide range of biotopes – from the hot tropical regions of Indonesia to the cold mountains of Tibet. Across Asia, bamboo had offered itself as a viable construction material owing to its strength, flexibility, and easy availability. Now, it struggles to compete with man-made materials like cement and steel to meet immediate issues of urbanization.

Bamboo falls behind on the list of futuristic materials due to a lack of awareness, cultural notes, material limitations, and economic factors. Unlike fabricated materials, the naturally-grown plant comes in a variety of shapes and sizes, making it difficult to generalize norms and standards around construction methods. Restrictive building codes and an inability to grade the material also hinder the adoption of bamboo. Construction techniques require skill, especially when used in conjunction with steel, concrete, or glass.

With international architectural discourse underlining concepts of sustainability and local materials, bamboo is proving its worth. Its strongest assets are carbon sequestration and phytoremediation – processes that capture air pollution and clean contaminated soil. Early Asian bamboo settlements were always built in harmony with local ecosystems, resulting in a balanced built environment. Contemporary bamboo structures are often initiated for more aesthetically-inclined motives, with eco-friendliness as an added advantage.

Urbanization has unveiled analogous challenges across many Asian countries. Its cities are growing rapidly, estimated to hold 55% of the countries’ populace by the year 2030. Population giants like China, India, Bangladesh, and Indonesia are faced with the responsibility of developing housing and infrastructure at exponential rates. As with the rest of the world, environmental damage is the most visible side-effect of a proliferating urban sprawl. A challenge unique to the Global South – one that remarkably concerns Asia – is the quest of rediscovering cultural identity in the built landscape. Asian cities can reach their pasts to solve urban technologies with vernacular and local materials.

Bamboo – its inherent properties and contextual suitability – can help tackle issues arising through out of urbanization. The capacity for fast growth and continuous production of new leaf surfaces make bamboo an attractive material choice for expanding Asian cities. The plant can be harvested in 3-5 years while traditional sources of timber would require 10x more time. In Nepal and Bangladesh, bamboo structures have quickly been erected and reproduced as disaster relief shelters.

Along with breakneck construction, the Asian context often requires affordable material. Being locally available, strong, and versatile, bamboo is a practical low-cost construction material for this region. It serves as a cost-efficient alternative to timber, offering similar if not better structural qualities. Bamboo has been widely used for low-cost housing in developing localities and economically weaker neighborhoods in Asia. The growth and production of bamboo place power back in the communities’ hands, often creating circular cutting around its processes.

Asian cities are facing the greatest risks from environmental problems such as pollution, extreme heat, climate change, and natural disasters. Being a naturally grown construction material with little refinement processes, bamboo is great for the planet. The more it is harvested, the faster it grows, providing habitat, restoring watersheds, and supporting indigenous communities. Bamboo is capable of capturing and storing atmospheric carbon in its solid state, giving it a negative carbon footprint. Bamboo plantations also help restore degraded soil and land.

A gap is found in vernacular knowledge when it comes to high-rise buildings, a common stereotype of developed cities. Tall structures provide a practical way of decongesting urban sprawl, especially in densely populated cities like Mumbai, Manila, Tokyo, and Beijing. Bamboo skyscrapers could be a reality by using the material in combination with steel, concrete, or timber.

The joints of the structure are most important to secure the building and are often reinforced with steel. Triangulation – the arrangement of bamboo stalks in triangles for structural optimization – is another technique that allows the grass to tower into the sky. Experimentation with light-weight 3D-printed bamboo structures opens up opportunities for more widespread use of the material. Bamboo-concrete and bamboo-wood hybrids allow for greater structural strength and utility while maintaining a traditional and eco-friendly touch to buildings.

The greater role of bamboo as a construction material in Asia is to reclaim the traditional architectural identity. From time immemorial, bamboo has occupied a meaningful place in the heart of Asian culture. In order to appear like the “developed” nations, Asian cities have become echoes of the Western world by hosting glass-and-steel structures that are better suited to cold environments. Bamboo has long been labelled as a ‘poor man’s timber’ based on ideas around inferiority regarding indigenous and “un-colonized” practices.

A renaissance of bamboo architecture in Asia is underway. It is time Asian architects reinterpret the meaning of “developed” and use bamboo to claim their place as important contributors to the world. With the promotion of advanced technology and experimentation in bamboo construction, experimental structures are finding homes in growing Asian cities. The material reminds Asians of their roots and their deep connection with the natural world, paving a way for sustainably-advanced human habitats of the future.

This article is part of the ArchDaily Topics: The future of Construction Materials. Every month we explore a topic in-depth through articles, interviews, news, and projects. Learn more about our ArchDaily topics. As always, at ArchDaily we welcome the contributions of our readers; if you want to submit an article or project, contact us.