What Is Co-Creation in the Context of Architecture and Urban Planning?

In recent years, the term “co-creation,” a buzzword in the business and management sector, has made its way into the architecture and urban planning discourse. The term is used to define a large concept that describes working intentionally with others to create something jointly. But architecture is already the result of a collaboration between multiple actors, architects, clients, investors, developers, and local administration, to name a few. Can the term still apply to this field, can it bring forth new forms of knowledge, and does it differ from the concept of participatory design? 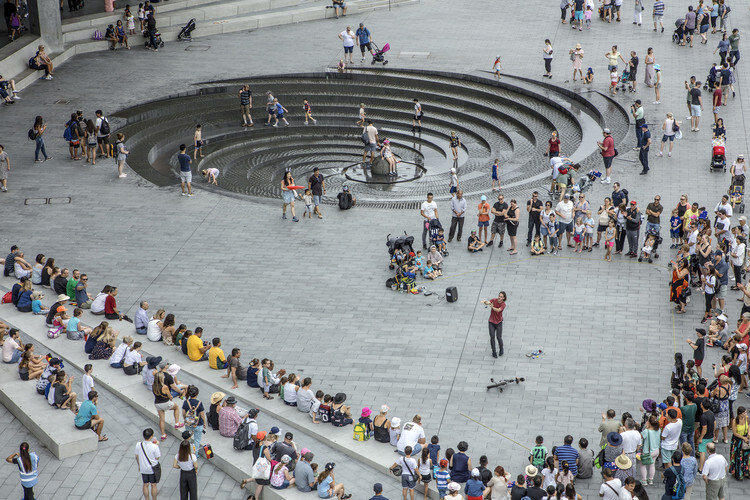 The term appears to have originated in the business sector, with some mentions in the early 1990s and its popularization in the 2000s, with CK Prahalad and Venkatram Ramaswamy’s article in the Harvard Business Review. The article describes a paradigm shift as globalization and technology developments challenge the traditional role of the expert. The new marketplace is beginning to understand that consumers have become a new source of competence, a source that can be tapped into to increase the value of the product. Now a similar shift is taking place in the world of design.

Since the onset of Modernism, and maybe even before, the image of the architect has been mystified as a strong-willed, free-thinking, and uncompromising figure. In stories such as Ayn Rand’s novel “The Fountainhead,” this romanticized heroic character is caught in a struggle between his own creative vision and the external collective opposition, an image reminiscent of Modernist architects such as Mies van der Rohe or Le Corbusier that has leaked. into contemporary renditions of the starchitect. The image of a collective process of designing stands in stark contrasts with this. As architectural problems are growing in complexity, the necessity to find new methods of communicating and collaborating efficiently increases. Involving not just the typical actors but also the end-users in the design process promises to offer multiple advantages by deepening the understanding of the larger context, empowering communities, and generating long-lasting change.

The Expert Citizen: A Change of Perspectives in Participatory Design

A Citywide People’s Network: The Example of Jhenaidah

Jhenaidah is a city in southwest Bangladesh built along the Nobogonga River. Despite being an important resource for the city, throughout the years, the river has become neglected, polluted, and even dangerous. A self-initiated local organization set out to change this and return the river to the inhabitants. The resulting project developed through an intensive dialogue between the architects at Co.Creation.Architects, the local municipality, and the local community. Small and accessible interventions along the riverfront transformed it into an accessible, open, and vibrant public space.

One of the keys to this success is the design process that stands behind it. The architects worked closely with the residents, especially the vulnerable groups such as women, children, the elderly, and the disabled. By implementing their inputs, such as installing changing cabins or slip-safe paving, the architects ensured that the solutions provided an answer to their specific needs. The architects are also talking about the act of co-creating not just with humans but also with the surrounding natural context. According to them, the process of adapting to the environment is naturally occurring in communities. Thus, the role of the architect is to facilitate communication and bridge the gap between local communities and the authorities and professionals.

Although the project is ongoing, the effects on the quality of urban spaces are visible and felt by the local communities and the city at large. The people are bringing a deeper understanding of their environment while also changing their perspective on it. Once they can affect change in their spaces, they feel more connected to them. This also has a snowballing effect. Once local organizations see that change is possible, more and more initiatives are born, further developing well-adapted and site-specific solutions.

Is Co-Creation Reserved for Public Projects?

Most user-centered design initiatives focus on public spaces and larger communities, making it easy to dismiss the idea when it comes to smaller or privately-owned projects. Here communication with the client is often more straightforward. But the client and the user are not always the same entity. Taking into account all those affected by the project and involving them in the process ensures that projects are better fitted to the real needs and, thus, more profitable for the client or developer.

A housing development in Amsterdam proves the contrary, demonstrating the advantages of involving future residents in the process and giving them the freedom to define their needs, both in terms of individual homes and collective spaces. The EnBloc project by Marc Koehler Architects developed a method for working with future residents in a cohesive and productive way. It uses a Tetris game approach, creating a system of units of 30 or 50 square metres. The units can be linked both vertically and horizontally, allowing residents to vary the size of their homes according to their needs and budgets. The units were also empty, so the residents worked with the architects to create personalized solutions and create the rooms and spaces they needed. The project looks and feels coherent because of the framework developed by the architects, yet it empowers the residents, who were involved from the start, to create the spaces and communities they wished for.

And something else I find important: you move somewhere where you have known your neighbors for five years. This co-creation element in the design process creates social cohesion. As far as I’m concerned, it should be mandatory in new construction projects. — Iwan, one of the residents of EnBloc

Both terms, co-creation and participatory design, refer to aspects of Human or User-Centered Design, an attitude based on the belief that everybody can meaningfully participate in the act of design. Participatory design is often centered on the involvement factor, aiming to create a design that is centered on the users’ involvement in it. While there are some successful renditions of this concept, it often takes the form of token participation, mimicking involvement but avoiding to enact real change. Participatory design is also interpreted as consulting the community at one stage of the process, picking up the suggested ideas, and moving forward with the process.

On the other hand, Co-design refers to a collective creativity that is applied across the whole span of a design process. The concept understands the users and other parties as sources of competence, exploiting their knowledge about their own needs. The concept is also aligned with Jeremy Till’s idea of ​​the expert citizen, viewing residents as experts in their environment and their needs. The result is a design process based on a collaboration between experts in different fields. Therefore, the users become part of knowledge gathering, idea generation, and concept development. The architect or designer retains responsibility for the design, acts as a moderator between experts and creates the structure of the process of collaboration.