What Do We Do With Waste? The Circular Economy and the Global South

A lot of people around the world would agree that we are currently in a climate emergency. The IPCC report, released last year, makes for difficult reading. Practitioners in the built environment have taken to direct climate action, with organizations such as ACAN and Architects Declare fostering carbon literacy and calling for designers to re-evaluate how they practice. 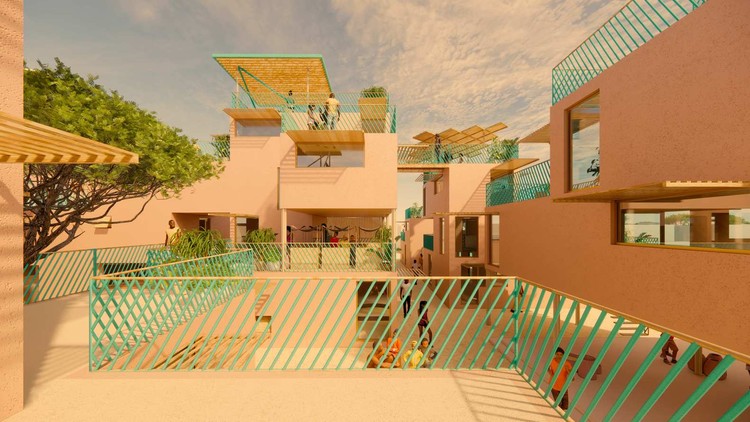 Within this wider climate change conversation, there’s the frequent occurrence of a phrase – the circular economy. At the heart of it, a circular economy redefines the way the world consumes and produces both goods and services. It’s an economic, but also a social framework that seeks a shift from the consumption of finite resources and looks to – as far as possible – eliminate waste and pollution.

Through an architectural and design scope, the definition is more immediately apparent. A transition to renewable energy sources has taken center stage in design conversations, and the reuse, repair, and recycling of materials has become the modus operandi of a large number of architecture studios. From an urban perspective, the circular economy is also a frequent subject in discussions and policy-making, with cities such as Prague establishing a local circular economy.

The very essence of a circular economy means the deep interrogation of interrelated systems, from a local, regional, to the global scale. That means the holistic inclusion of the Global South. It’s a disputed term, but it’s a useful one – delineating less economically developed states, most of which bore the brunt of imperialism and colonialism, and thus made the states of the “Global North” wealthy.

It is less about the fact that this inclusion is happening or not, it is. But rather, especially in regard to the built environment in the Global South, solutions tailored to the circular economy may sometimes not adequately probe the systems at hand.

The Ellen MacArthur foundation – seeking to inspire the building of a positive future circular economy – has an extensive number of resources examining the circular economy from various viewpoints. For the African context, the foundation has a document surveying opportunities in regards to the circular economy and the built environment. It’s a detailed survey – incorporating solutions such as the use of local materials in both rural and urban construction and championing bioclimatic design.

However, the survey fails to take into account important systemic considerations – such as the important caveat that African countries are far from being on a level playing field. A very visible way this manifests itself is in what can arguably be viewed as the integral issue a circular economy looks to eliminate – that of waste.

Far from being an abstract concept, waste has extremely real ramifications for the urban health of African cities, creating risks of disease and flooding – not to mention the environmental impact. This waste in many African countries and other Global South nations, however, is far from only being a home-grown issue. Instead, a large amount of the waste found in these countries is imported.

The structure of the global economy as it is today has created a wildly unequal system where wealthier countries send waste overseas to reduce domestic landfill. The European Union is the largest exporter of plastic waste, while the US leads as the top exporter for a single country.

In Ghana, European plastic waste constantly washes up ashore on its beaches due to the country’s link to the Atlantic Ocean. Kenya, despite a ban on single-use plastics in protected areas, is still inundated with plastic from the world’s developed nations. Not addressing this inherent power imbalance when seeking the application of a circular economy risks the implementation of stopgap solutions in the built environment that function poorly as long-term projects.

Amidst the backdrop of Kenya’s plastic waste problem, a Norwegian start-up partnered with UN-Habitat for an ambitious project – to build housing out of recycled plastic. Plastic waste is shredded and mixed with other materials to create a sturdy structure.

With a sample home to be built in Kenya, it’s an admirable aim, but one that exposes the limits of documents like the one produced by the Ellen MacArthur foundation – not engaging with the global plastic waste trade. A truly successful economy will look at the elimination of waste not only in the local context – but ask the more political circular query that questions where all the waste in developed nations actually goes to.

Houses made out of recycled plastic in Kenya might solve the issue of the immediate provision of housing – but projects like that will be far from being true success stories on recycling and eliminating waste if even more waste will likely find its way into Kenyan cities from developed nations in the future.

In the Ivory Coast, projects have been initiated in partnership with UNESCO that look to convert plastic waste into bricks, which will then be used to construct classrooms. The wider issue – that of a continent strained by an exploitative economic relationship – remains.

Design, of course, is an extremely limited tool amidst a wider societal framework. As the global plastic waste trade, and waste trade in general, continues to export the true costs of proper waste management to more fragile, it’s important for waste in the circular economy conversation be simply “designed away” and declared as solved.

It’s important to have a more grounded conversation, where homes made of recycled plastic in the Global South are not treated as a catch-all solution, but instead spark critical changes to policy and the current global economic order.