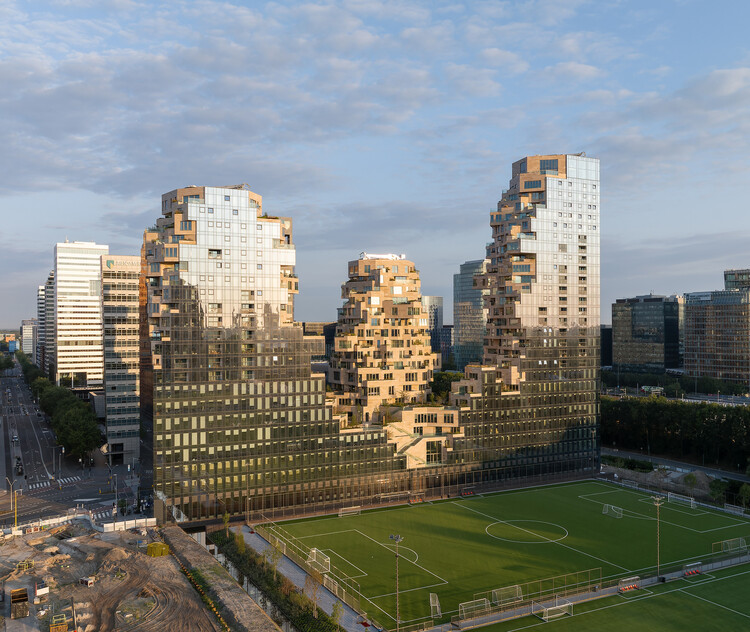 Text description provided by the architects. Valley, the dramatic, geology-inspired, plant-covered high-rise designed by MVRDV for developer Edge, was officially opened in a ceremony on Friday. The 75,000-square-meter building, which was recently declared the world’s best new skyscraper by the Emporis Awards, stands out in Amsterdam’s Zuidas neighborhood with its three towers of 67, 81, and 100 meters and its spectacular cantilevered apartments. The building distinguishes itself in several ways: firstly, it combines offices, shops, catering, cultural facilities, and apartments in one building; Secondly, the closed-off buildings elsewhere in the Zuidas, the green valley that winds unlike between the towers on the fourth and fifth floors is accessible to everyone via two external stone staircases. The building’s extensive planting, designed by landscape architect Piet Oudolf, hosts approximately 13,500 young plants, shrubs, and trees. As these mature over the coming years, they will give Valley an green appearance, making the building manifesto for a greener city.

Valley is an attempt to bring a green and human dimension back to the inhospitable office environment of Amsterdam Zuidas. It is a building with multiple faces; on the outer edges of the building is a shell of smooth mirrored glass, which fits the context of the business district. Inside this shell, the building has a completely different, more inviting natural appearance, as if the glass block has crumbled away to reveal craggy rock faces inside replete with natural stone and greenery.

Various locations throughout the three-tower complex offer breathtaking views of the city – the apartments, of course, but especially the sky bar at the top of the tallest tower, which visitors can access via the Molteni flagship store on the ground floor. The building’s layout is tailored to a mixture of residents, workers, and visitors: on top of the three-storey underground car park, offices occupying the lower seven floors, with apartments located on the eighth floor and up. Much of the building is open to the public: from the publicly accessible footpath that zig-zags up to the central valley from the street level, to the Grotto, an atrium that forms a covered street on the first floor where the Sapiens Lab – a breeding ground for young scientists – will soon open. The grotto is connected to the outside by two large skylights that double as shallow water pools in the valley level above, and its natural stone flooring, walls, and ceilings – the same stone used on the surfaces of the valley and towers – makes clear that All the public areas of the building are part of the same apparently geological formation.

The design and construction of Valley is utterly bespoke, requiring the sustained commitment of hundreds of designers, engineers, builders, consultants, and of course the client. The enormously complex shape required a special commitment to fine detailing that further enhances the design concept. MVRDV’s technology experts created a series of custom digital tools to perfect the building, from a tool that ensured every apartment had adequate light and views, to a program that made possible the apparently random pattern of over 40,000 stone tiles of varying sizes that adorn the building’s facades. Each of the 198 apartments has a unique floorplan, made possible by the interior designs by Heyligers Architects. And the outlandish cantilevers of the towers are possible thanks to innovative engineering, including eleven steel “specials” bolted to the concrete building that take the overall appearance to the next level.

Landscape architect Piet Oudolf developed a matrix to select the right plants for each location in the building, taking into account factors such as wind, sunlight, temperature, and maintenance. Trees, for example, are largely found on the lower floors, while the uppermost levels mainly support small plants. In total, more than 271 young trees and shrubs and approximately 13,500 smaller plants occupying the natural stone planters, representing 220 different plant species. In the coming years, the building will mature into the lush appearance of the design team’s vision as the greenery continues to grow. The biodiversity of this landscape is further supported by bird- and bat boxes as well as various bee and insect hotels. Maintained using an automatic irrigation system and by “façade gardeners”, the trees and plants on the terraces will positively affect the well-being of people living and working in Valley.

Valley combines insights in the field of sustainability, technology, and health. The building’s energy performance is 30% better than local regulations require, it has received BREEAM-NL Excellent certification for the commercial spaces, and the residential area scored an 8 out of 10 on the GPR Building Scale, a Dutch measurement tool that scores across buildings across five themes of energy, environment, health, quality of use, and future value. The latest smart technologies are integrated in the office spaces, including IP-based Building Automation Systems and various sensors linked to monitoring actual usage.

The construction of Valley took four years, with the first residents and entrepreneurs moving into the building at the end of 2021. With the opening ceremony hosted last Friday by the building’s owner RJB Group of Companies and developer Edge, the project is finally ready to be fully occupied by the public.

Already the building’s striking design has attracted media attention and debate, especially in the Dutch press. “Once again, MVRDV shows that dream images can be made buildable,” explains Kirsten Hannema for de Volkskrant. “Using 3D software, in which the architects entered requirements with regard to daylight, view, cooling load and noise exposure, they ‘rationalised’ the design. The irregularly shaped facades eventually have about ten different angles, with the natural stone cladding fitted together like a puzzle.”

“An oasis in the stone desert on the Zuidas,” writes Bernard Hulsman in the NRC Handelsblad. “It is not only because of the vertical forest and the cantilevered building parts, eleven of which are so large that they seem to float away, that Valley differs from all the towers that have been built over the past quarter of a century between the Amsterdam ring road A10 and the Buitenveldert district. With catering establishments and shops on the ground floor, on the bottom seven floors and, above that, 198 expensive rental homes in many shapes and sizes, Valley is the first building in the Zuidas where working, living, and entertainment are mixed.”