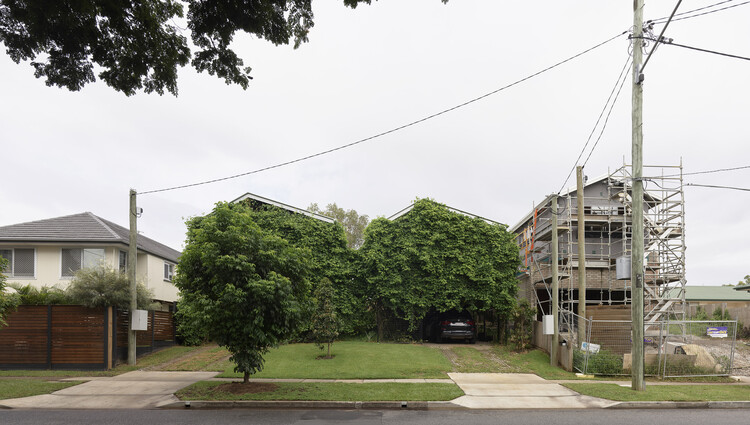 Text description provided by the architects. Located about 6.5km from the city centre, the middle-ring of suburb of Tarragindi contains mainly 1950-60s asbestos-clad post-war housing built on large lots. Pre-1946 housing stock in the Brisbane inner-city generally can’t be demolished, so developers have moved to this middle ring of suburbs taking advantage of the opportunity to fill and densify. The client, who is not a developer, wanted to try their hand at an infill project as an investment opportunity. Admirably, they were happy to take a different approach to the cookie-cutter McMansion-type infilling the typical of the area. One that could be simple, repeatable, prioritise landscape, and give future owners the opportunity to adapt.

The old house was removed and the block of land split down the middle to create two new 7.7m wide lots. The conventional approach, encouraged by the city plan, is to build to a zero setback for 9m on the common boundary so as to have enough width to fit a double car garage and enclosed entry to the street. This typical outcome could be described as ‘ocean liner’ housing without green space. A barrier of solid garage and entry doors at the lower level facing the street (the hull of the ship); a mini unusable verandah above, with a glazed opening behind, facing the street (the bridge of the ship); then a peppering of small ‘porthole’ windows down the side elevations to manage privacy and overlooking.

Using the hilly topography, typical of most Brisbane blocks, the single story ‘twin’ houses were elevated above an open under croft facing the street. This is a place to park cars, kids to play in the shade, store kayaks and bikes, with heights setup to allow future infill. The site was carefully cut, and levels established to avoid the need for block retaining walls, and concrete slabs on the ground. Reducing trades and cost, this allows the majority of the build to be a carpentry based using prefabricated wall and roof framing delivered to site, typical of local volume housing. The under croft also serves and a way to elongate the entry from footpath to the more public living areas of the house located at the rear. While the pair of houses are built on their own lots with no common property, there are no fences to the street or dividing fences between the two under croft areas. The landscape of each house is visually shared connecting both spaces to overcome the feeling of a narrow lot. Layered planting manages degrees of privacy, but areas open up enough to allow neighbors to chat, provide passive surveillance over each other’s property, and create a sense of community.

The house is entered thought a courtyard in the center of the plan so as to avoid the more private bedroom spaces at the front of the house. The entry contains a tree and decked sitting area at a level halfway between the under croft and internal floor level breaking up the entry transition. The courtyard brings in light, and sun deep into the plan in cooler months and captures breezes in the warmer months. It creates a protected outdoor space where gatherings can take place, and kids monitored as they play in the under croft with a view over both levels. Entering into the upper level of the house you arrive at a large space for meals and living which opens out onto a grassed backyard. Detailing in this more public part of the house was important. Budget is spent on large timber siding doors front and back with flush thresholds. This is the area of ​​the house with a raked ceiling, the place to benefit most from the increased feeling of space. Kitchen cabinetry sits as a long double-sided island down one side of the room, increasing storage and enabling both sides of the benchtop to be used.

Bedrooms and bathrooms sit at the more private less-used end of the house. Here detailing is simple using volume housing techniques. Ceilings are set at the minimum 2.4m to reduce materials and cost. Aluminum louver window openings run from floor to ceiling to maximise light and ventilation and counter the effect of the lower ceiling height. The obscure glass blades open to 45 degrees managing balustrade requirements and privacy without the need for a secondary external screening typical layer of neighboring houses. A mesh trellis covers the street elevation of the house from ground to roof. Passion fruit provides a quick growing planted buffer to a busy road, reducing noise, dust, controlling morning sun, and managing privacy into one of the bathrooms and bedrooms. This end of the house is linked to the living space via a semi-outdoor connection adjacent to the central entry courtyard. The link is multi- purpose, accommodating a long desk for study, a sink and mirrored alcove which serves as the laundry, main bathroom vanity and a place to hang towels and clothes to dry. The house is set out to an 900mm grid to allow standard sized internal doors, windows and sheets of fiber cement cladding to be used down the length of the house reducing labor. With cost in mind, building both of these houses identically and at the same time created efficiencies. A reduced number of deliveries, concrete pumps, cranes and simply the number of visits supporting trades had to make to site.

It is important for every project to have larger goals. Build the minimum area that can accommodate a variety of families so as to use the minimum amount of building material. Develop a plan that allows opportunities for future owners to add to adapt and infill spaces around the house. Not requiring the expense of a development approval, complying with the city plan. Finally, the idea of ​​repeating the design and modules within that could be arranged in different ways on other sites with differing site conditions. Each room sits as a module anchored to the hallway linking each space like a spine down the length of the plan. Bedrooms and the adjacent service space can be separated and/or rearranged sliding along the spine. For example, additional courtyards could be added between each bedroom by stretching the plan; the living end of the house could be flipped to be facing the street if that condition made sense; modules could step up or down the site rather than sitting on one level depending on site topography. It is also intended that the study linking zone could be reconfigured to be an internal staircase linking the upper level to a future infilled lower level replacing the tandem parking area.

The most rewarding part of this project has been how the client came to love the houses. Ben, Colleen and their two teenage daughters originally intended to live in one of the two houses for 12 months or so, before selling both. They have enjoyed living there and developing the garden so much, they have put on hold plans to sell either house and are now renting the neighbor twin to another lovely family.