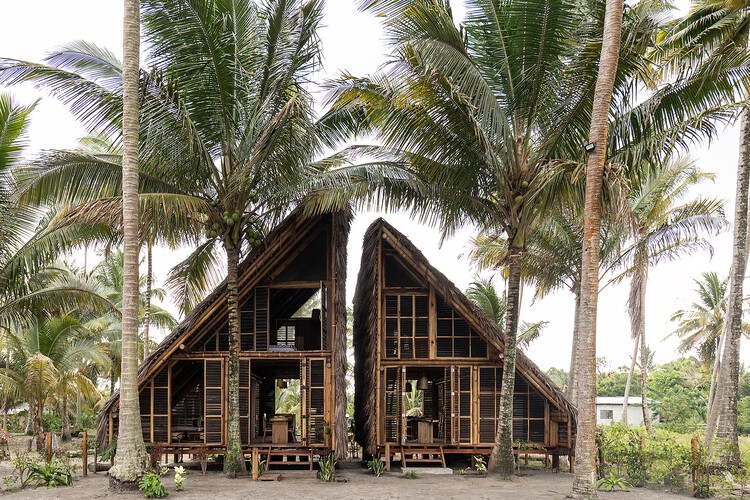 Text description provided by the architects. The project takes place on the island of Portete, located in the Province of Esmeralda – Ecuador, one of the sectors affected by the 2016 earthquake. As a result of this event, the 80 families who lived on the island were displaced to the mainland in an infrastructure that was not their customs and without any appropriate thermal conditions for the area. The endemic materials of the area such as bamboo, wood, toquilla straw, and kade were replaced by zinc plates, blocks, and concrete. The traditional construction of the area whose materials are easily accessible, cheaper, and more sustainable have been stigmatized as low-quality materials. In this way, distancing the communities of the sector from accessing their own homes with traditional construction systems that are easily executed by having specialized labor in their family.

For 2.5 years, hand in hand with the community of Portete, we have been working for the revaluation of construction in bamboo and toquilla straw, renewable materials from the area with low environmental impact. The intention of the project was to develop 3 types of bamboo housing responding to different sizes of families in the area, their economic capacity, and ease of execution to make it affordable. Open, flexible, and adaptable spaces were proposed. The central idea of ​​the exercise was to develop homes with high thermal quality. This quality will reduce the use of fans and air conditioning.

The first housing prototype Casa Toquilla M, With 70 m2, with a direct construction cost of $16,000, is a house to accommodate up to 8 comfortable people, it is idealized as a deck raised on piles, in response to possible flooding and durability of the material. For housing, the habitability conditions of the sector where its inhabitants congregate outside to enjoy the breeze are taken into account. The meeting space is associated with the food preparation space adjoining the patio for consumption.

The technical details necessary to weave the toquilla straw were part of the spatial development, thus taking advantage of the slope of the roofs and generating a second useful floor. The spaces are open, generating a utility corridor that enhances cross ventilation throughout the house. A system of pampil partitions, very resistant to weather and humidity, is responsible for closing the house at night. No glass was required, but a mosquito net that attenuates the passage of wind at night, keeping it fresh. An air recirculation system is applied by means of a wooden grid on the floor that allows cold air to pass through the shade of the house itself.

The second housing prototype Casa Toquilla L, With 80m2, with a direct construction cost of $20,000, is the version of the toquilla house developed on one floor, designed for families made up of elderly users or those with reduced movement capacity. The house accommodates up to 8 people. Unlike Casa Toquilla M, this one is compartmentalized into three spaces for privacy issues according to the family’s request. Two bedrooms and a common area that also houses rest spaces. Thermal strategies such as the grid on the floor to recirculate cold air and the pampil screens with mosquito nets are replicated just like the previous prototype.

The third housing prototype Casa Toquilla S, With 60m2, with a direct construction cost of $13,000, is the smallest of the housing study trilogy. Ideal for 6 people, its distribution is similar to the toquilla M house, the exterior spaces on the second floor are eliminated, but the upper partition is fully opened to optimize space and have the same benefits as the balcony.

For the construction of the three housing prototypes, local labor was used, each house serving as a practical exercise to train the community in bamboo construction and toquilla straw weaving.

Each home has its own sewage management system through a biodigester, biological filters, and infiltration fields.

At a technical level, the houses were treated with different preservation and curing methodologies to evaluate their durability and to be able to carry out a real follow-up of the complications that the material may suffer in a humid and saline environment such as that of the coast.

We thought of a series of pieces that would allow experimenting with and reinforcing the Bamboo construction technique. Working with mixed techniques, between simple joints with metal pins or traditional joints with fish mouth or flute beak, a practical and efficient structure is achieved.

Some of the typical problems of these constructions were taken into consideration, such as rust on joint pieces, installations, or the final finish. To solve these problems, only stainless steel was used for threaded rods, nuts, and washers. For the installations, reinforced cable was used for exteriors and all installation is conducted between the pieces drilling only in steps or for installation of outlets and switches, which were carefully selected to affect the Bamboo in the least way.

For the final finish, after several tests, the material used was an oil based on beeswax, which protects the material from UV rays and water.

TOQUILLA HOUSES is a project in which the technique is optimized to the maximum, to be the most efficient without neglecting quality or safety. A set of decisions and details that propose to resume construction in Bambú and Paja Toquilla with the objective of making it accessible to all. Currently, in the area, they have replicated the methodology, design, and construction in 3 more homes.