This year, the top prizes at Eastman’s Vanceva World of Color Awards go to buildings that may not share many formative qualities upon first glance, but are all alike in their distinguished use of vibrant structural elements.

(banner) An honorable mention goes to New York City’s Cooke School in East Harlem, which employs Vanceva interlayers in its big angular bay windows. The effect is not only visually striking, but also helps the school’s special needs students navigate the site

all images courtesy of Vanceva World of Color Awards

OMA’s Audrey Irmas Pavilion In LA, a hulking 55,000 sq ft punctured light box, and a hospital carpark in Copenhagen may seem like odd bedfellows. Both buildings, however, create a dramatic but carefully controlled aesthetic effect using light and colored glass. And both have been rewarded for their efforts, taking the top prizes in Eastman’s Vanceva World of Color Awards, a bi-annual celebration of bold and beautiful use of colored glass in architecture, interiors and furniture.

OMA’s Audrey Irmas Pavilion in LA and a hospital carpark in Copenhagen may seem like odd bedfellows. Both buildings, however, have been rewarded for their efforts in using light and colored glass with Eastman’s Vanceva World of Color Awards 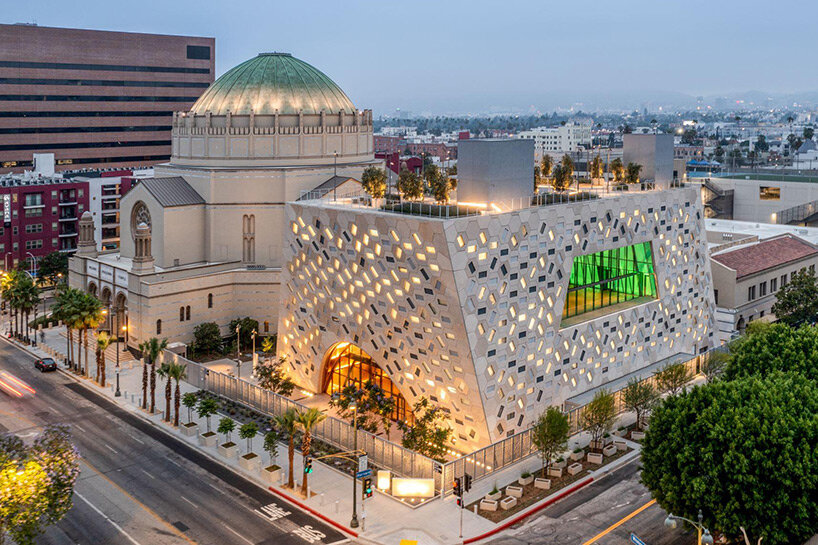 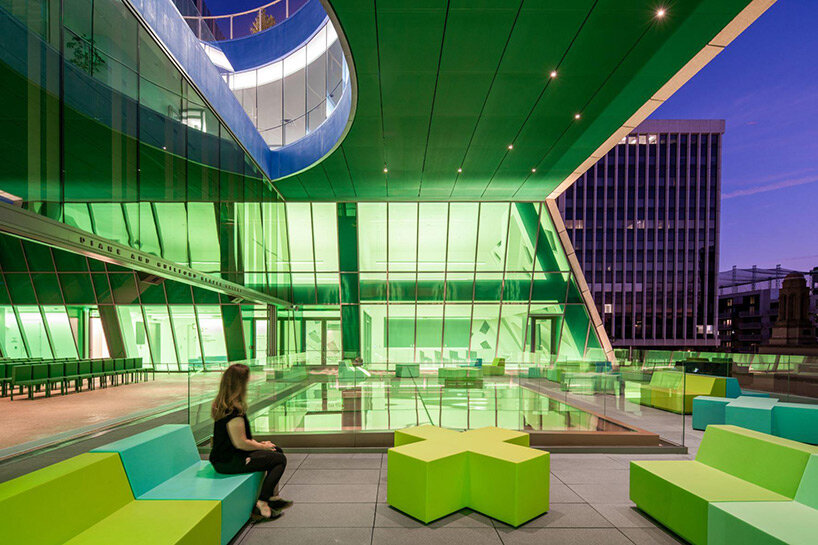 WOCA juror Joe Jacoby, director of design at Utah-based Jacoby Architects, praised the Pavilion’s ‘powerful pops of color’ and its ‘light-colored fractal facade’. ‘The simplicity of the green has such a big impact and meaningful connection to the existing green dome roof next door,’ Jacoby says. ‘They took a simple concept, and went big with it, while keeping the purity of the design.’

‘Laminated glass was not simply used to add color,’ adds WOCA juror Firas Hnoosh, managing director of Nordic Office Architects, ‘It was used as a painting and volumetric medium to color the different recesses within the building and complementing the composition.’ 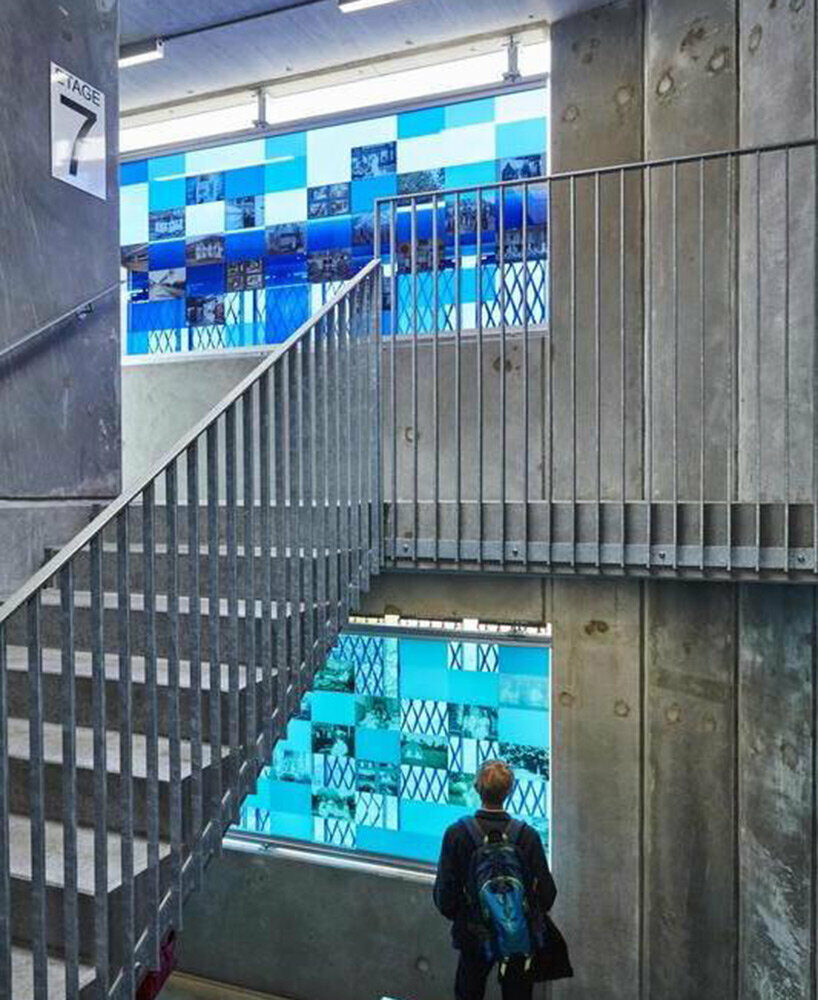 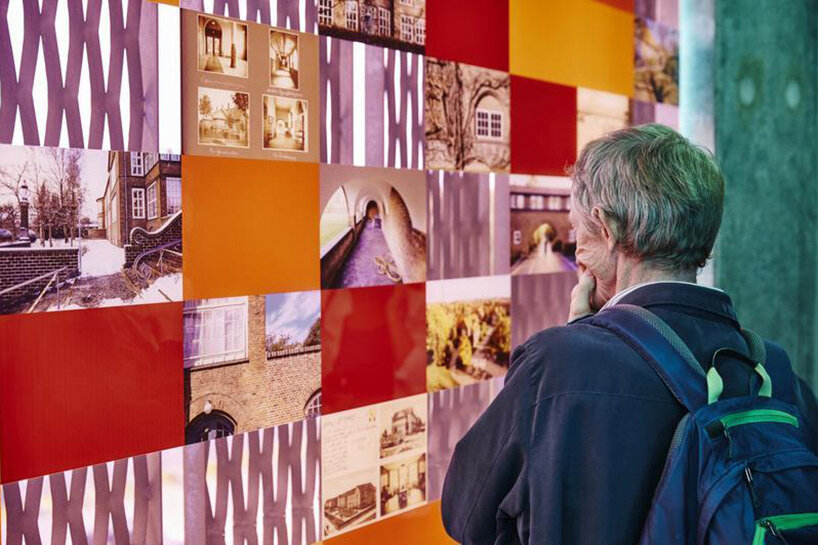 Taking the top interiors prize, artist Malene Nors Tardrup’s installation ‘A Long Time is Not Forever’ is a series of photo-collages printed on Vanceva colored windows that describe stories from the hospital’s 100-year history

Artist Malene Nors Tardrup takes a radically different approach at the Bispebjerg Hospital Carpark. her piece, A Long Time is Not Foreverwhich took WOCA’s interiors top prize, is a series of photo-collages printed on Vanceva colored windows on seven levels of the carpark’s staircase. Remarkable inside and out, the collages, each a different color, tell stories from the hospital’s 100-year history.

‘The installation introduces splashes of color to an otherwise very utilitarian structure,’ says Monika Kumor, project designer at architects HOK and another WOCA juror. ‘It plays with multiple materials to tell the story of the place and to introduce light, color, and transparency in a very creative way. It gives a recognizable, strong, and uplifting wayfinding element in an environment that can be stressful and overwhelming for patients and their families.’ 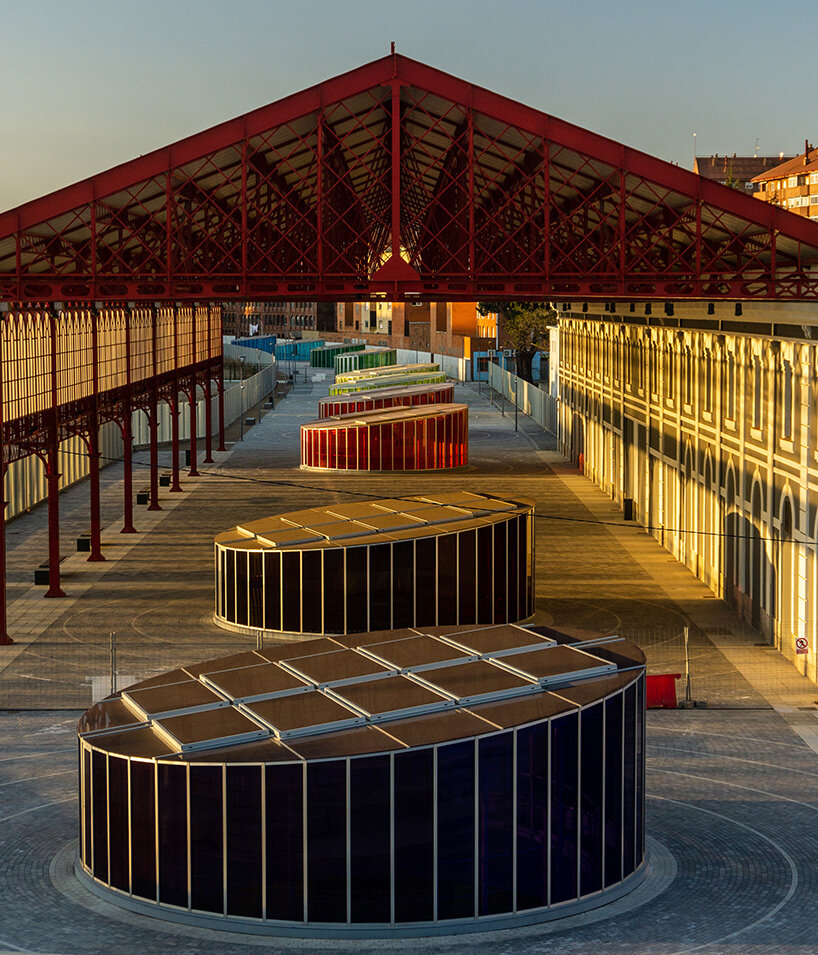 The Awards also give honorable mentions to a number of other projects, including the Cooke School in East Harlem in New York, which playfully uses Vanceva interlayers in big angular bay windows, creating visual punch but also helping the school’s special needs students navigate the site.

Also picking up honors are the Spanish city of León – which marked the introduction of its high-speed underground rail line with the installation of 11 luminous skylights made of high-performance Vanceva glass – and the Church of the Blessed Mary Restutta in Brno, Czechia, which tops a stark concrete circle with an 80 m Vanceva glass rainbow. An honorable mention also went to The Mist Hot Spring Hotel in Xuchang, China. The resort features a double-skin shell of laminated magenta and blue Vanceva interlayers set against serene, gray granite walls, both elegantly shrouded in steam from the hot springs.

‘The number and scope of projects entered in this year’s World of Color Awards broke new records for the competition. We are always inspired by the innovation we see as the entries come in. Vanceva PVB interlayers are used to create landmark designs, special effects, wayfinding, and so many other things’ 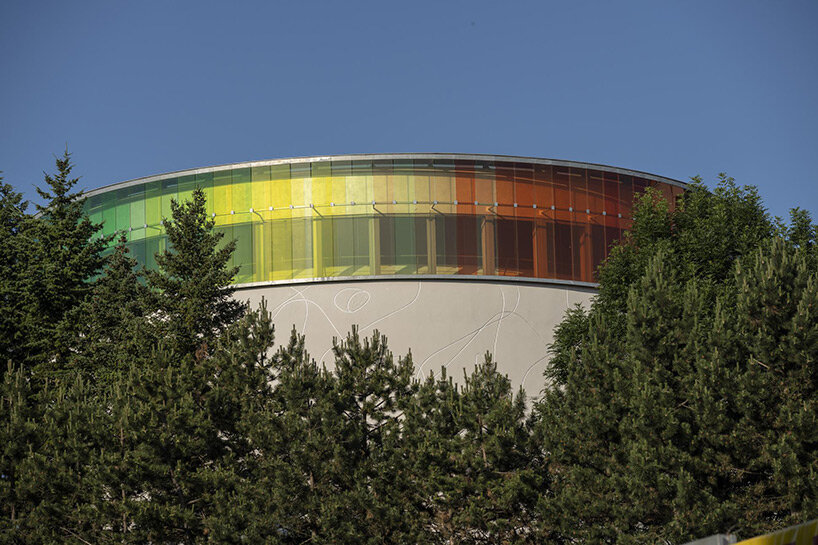 the WOCA honorable mentions at the Church of the Blessed Mary Restituta in Brno, Czechia

Vanceva offers the largest system of PVB interlayer colors in the world with a palette that can be combined to create more than 17,000 transparent, translucent, or solid colors. And, it says, architects, designers and artists are getting ever more daring and inventive in their integration of colored glass into new designs. ‘The number and scope of projects entered in this year’s World of Color Awards broke new records for the competition,’ says Priya Kalsi, global market segment manager with Eastman. ‘We are always inspired by the innovation we see as the entries come in. Vanceva PVB interlayers are used to create landmark designs, special effects, wayfinding, and so many other things.’

Eastman will be celebrating all the WOCA winners at an awards ceremony at Glasstec 2022 — Let’s Go Live! Tradeshow running September 20-23, 2022, in Düsseldorf, Germany.