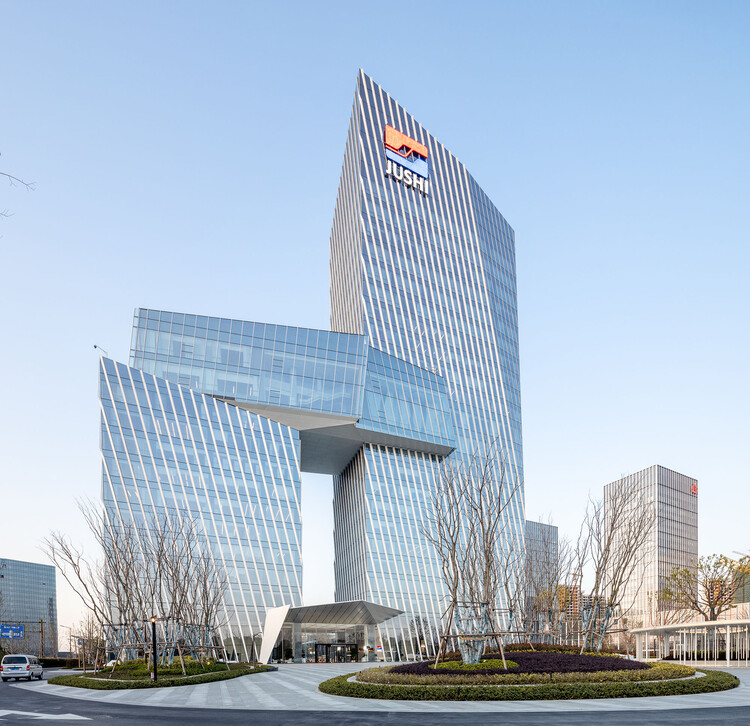 Text description provided by the architects. Fenghuang Lake CBD is the densest block of global leading enterprises in the segmented industry in Jiaxing, Zhejiang Province. Since 2010, with the completion of the Zhenshi Hotel and Zhenshi, headquarter tower, the two high-rise buildings of Fenghuang Lake which are located south and north of the lake, has become a city landmark. During the period, the manufacturing industry became the national economic center, and China JushiGroup, the world’s number one in glass fiber, is also growing rapidly. In 2016, the client approached GN architects again and began to discuss the positioning of a new tower as Jushi headquarter. In a rapidly changing environment, the client wanted the building to be able to adapt to the current state of use, also enough flexible space they can manage efficiency and more room for value transformation in the future. The Jushi Tower, located on the central axis of Fenghuang Lake CBD in Tongxiang City, faces Feng Huang Lake Park to the south and adjacent to CBD’s Central Park to the east, was officially dedicated in May 2022.

Construction of functional program. At present, the evolution of science and technology and the iteration of working patterns are accelerating, and the function and space of certainty are becoming shorter and shorter. In this case, we need to rethink the existing pattern of office space. In space use, the more accurate the boundary is, the less efficient it is, so adaptive-based tolerance design is a key point this time. The main body of the building consists of two towers, 120m, and 60m, The tower is connected by a two-story activity center, a mid-perpendicular aerial connector that serves as the building’s living field and is accessible to people at all levels.

The main reason for the final choice of this form is that the three bodies of the main building, the secondary building, and the air activity center, are lapped with “┏┫,” which are the best in terms of the maximum viewing ratio, the degree of freedom of integration, the flexibility of operation and the efficiency of service. In order to make the relationship between the tower and the connector more natural, we made different sections of the three volumes and made the mechanism of the facade conform to this shape-cutting relationship, forming a 12° Angle Angle with the vertical plane, so as to construct a unique curtain wall system. The main part of the podium is a service function that extends along the projection of the two buildings, including the large lecture hall, restaurant, reception center, swimming, and other auxiliary functions. The interior courtyard and entrance lobby formed by the podium are on one axis.

The sky corridor. The sky corridor is located at a height of 60 meters at the top of the sub-building. The two-story steel structure is cut to produce 5 sloping glass surfaces, including display, conference facilities, staff training, leisure bar, fitness, and other functions. The rooftop garden at the top of the platform expands towards the lake, giving a panoramic view of Fenghuang Lake and the best leisure center for employees within the area.

Lobby and Courtyard. The bottom two floors of the two towers run through to form a transverse space of about 100 meters, connected longitudinally to a waterscape courtyard, forming a T-shaped lobby. Wide lateral spaces are places of reception, the flow of people, and ritual activities; The cloister of the longitudinal courtyard connects the main building and auxiliary functions, and the courtyard water view extends into the lobby to form a flexible central axis, increasing the sense of image and depth of entry. The lobby uses 10m-high ultra-white glass, which is a continuation of the upper oblique curtain wall and shrinks close to the ground. The canopy is shaped by two triangular sheets, corresponding to the sectioning technique of the building as a whole. With the rhythmic wall texture of the main building as the backdrop to create a remarkable arrival experience field, Asymmetric treatment is controversial for a group headquarters building, this is the final part of the building, Fortunately, the customer respects the designer’s advice and the final result is gratifying. The main material of the canopy is an anodized aluminum plate, which can reveal a thick metallic light in all kinds of light.

12 ° inclined curtain wall. The block of the building massing has been inclined several times, forming a small inclination angle, conforming to the inclination angle, the main body of the building adopts the 12-degree inclined unit curtain wall. The curtain wall partition area is a parallelogram and these slashes are continuous on the unfolding surface, rising around the building. Slash is also the “curtain wall structure system, ventilator, outdoor brightening system” and other functions, the ventilator hidden in the glass has the function of sound insulation, and can be ventilated continuously for 24 hours, basically not affected by the outdoor environment. The curtain wall lights are hidden in the slash line. We need light visibility at each angle and ensure the light beads are invisible during the day. At the same time, the fly flake is slotted to ensure the effect and produce new details on the curtain wall components.

Fenghuang Lake has become a new city center. In May, Tongxiang issued an official announcement that The Jushi Tower was officially put into use. This also means that after 15 years, at different times, we have reached a consensus of value with the city and our customers, and we have designed a series of works that are slowly bringing new and beautiful changes to the natural ecology, enterprise growth, industrial development and even urban evolution of the CBD area of ​​Phoenix Lake.