The Global City and the (de)Evolution of the Public Realm

In October 2011, inspired by the Arab Spring revolutions, thousands of people in Australia and in many other cities in the world started to occupy public spaces. In Sydney, where I live, this occupation took place in Martin Place, appropriately enough right outside the Reserve Bank of Australia. This widely publicized protest was an attempt to promote a pro-democracy, civil liberty, social justice message, and to protest against corporate greed and economic inequality. 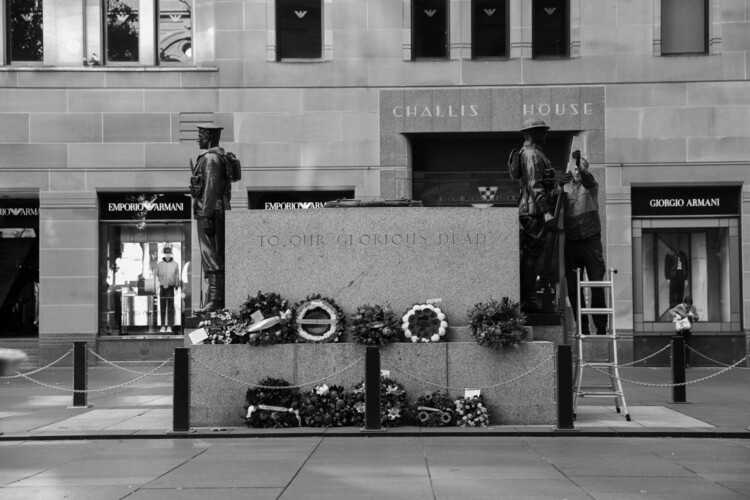 Later that month, about a hundred police officers broke up the protest, making dozens of arrests. The space was cleared of signs of inhabitation and restored for approved public uses. There were subsequent attempts to reestablish the occupation. There was even a motion put to the City Council to establish a permanent site for the protest, but to no avail.

At this point, some history of the evolution of this important public space is important. After the ring of public spaces around Circular Quay, which is framed by the Harbor Bridge and the Sydney Opera House, Martin Place is the most important public space in the city. The Sydney Cenotaph, a memorial to great loss, constructed after the First World War, is at the center, and is the focus of dawn ceremonies and remembrances. The great altar-like granite block is guarded by two bronze figures, stoic and seemingly unaffected by the surrounding trade and display of luxury commodity.

For us, appearance—something that is being seen and heard by others as well as by ourselves—constitutes reality. Compared with the reality which comes from being seen and heard, even the greatest forces of intimate life—the passions of the heart, the thoughts of the mind, the delights of the senses—lead an uncertain, shadowy kind of existence unless and until they are transformed, deprivatized and deindividualized, as they were, into a shape to fit them for public appearance. —Hannah Arendt, The Human Condition (1958)

An elegant series of beautiful stone buildings surrounds the monument, preeminent among which is the General Post Office At the time of construction, it was the most important public building in Sydney—open to and interconnecting everyone. This public building was privatized in 1996 and is now an elegant luxury hotel, with the post office reduced to a small corner store. The colonnade is populated with white-cloth tables for fine Italian dining, but there is still enough room to sit on the steps within the shade, with your sandwich and to-go coffee. There is also a small area in the seemingly small area reserved for the bicycle couriers’ marginal microculture of the gig economy.

The Occupy protest took place in this important public space and right outside the Reserve Bank of Australia, its modernist architecture aimed at projecting a different set of values ​​from the early 20th century’s weighty, solid and imposing stone bank buildings on Martin Place. Transparency, efficiency, and modernity, together with the democratic accountability of the Reserve Bank, seemed the new and fresh message when the building opened. According to the press statement: “Here, contemporary design and conceptions express our conviction that a central bank should develop with growing knowledge and a changing institutional structure and adapt its policies and techniques to the changing needs of the community within which it works.”

A year after the Occupy protesters were forcibly evicted, there was another event in Martin Place that filled the public open space with hundreds of beds with people encouraged to spend some time in them to “rest-easy.” This was not a protest, but an experiential marketing campaign by a major insurance and investment company. Presumably, there was a fee paid, and perhaps this warrants a classification outside the prohibition on camping in public space that was used by authorities for the eviction of Occupy protesters.

Another form of inhabitation of upper Martin Place began in December 2016. Within the construction hoarding of a new commercial tower opposite the Reserve Bank, the homeless of the city began to gather and live in an organic kind of settlement that became “Sydney’s 24/7 Street Kitchen and Safe Space.” A highly localized homeless community emerged, distributing food, blankets, and clothing and, most important, creating a safe place for people to spend the night. Walking past this encampment of Martin Place each day were all manner of city workers.

Although perhaps there was some sense of social guilt in the glances of these passersby, there was a sense of dignity in the eyes of those sheltering in the hoarding. Homeless were no longer so home-less. This was not charity, it was an authentic community, living, trading, working and contributing to the life of the city. This part of Martin Place began to feel under their custodianship, and both they and the city workers seemed happy to share it.

As this sense of acceptance grew, it seemed that the tolerance of the authorities diminished. The settlement was generalized by police and city social services with physical interventions and forced moves before finally being shut down in August 2017. The basis for the removal of this community was, again, a prohibition on camping or staying overnight in Martin Place. This great public space of the city was then restored once more for approved uses and activities.

This forced eviction of a vulnerable city community that Sydneysiders had begun to get to know felt wrong, unnecessary, and shameful. Lanz Priestley, the unofficial mayor of Martin Place, said, “The safety issue was driven home two weeks after Tent City was pulled down, when one of the guys who had been arrested there got beaten senseless in Hyde Park by a guy who used a shopping trolley to beat him.”

How can our conception of urban public space be so narrow? And whose interests are served? Who is the “public” to which the space seems to belong?

Somehow, between the invasive consumerism of commercial self-interest and the bureaucratic authoritarian tendency of the state, we need to find an authentic public space. We need an inclusive space of civic liberty, tolerance, and acceptance, an urban space of “public appearance” that is not owned by state or private interest, but to which we all hold shared responsibility and custodianship.

Such public spaces within cities would be open and organic in character, able to respond to the pressing needs and issues of the moment. They would be less fixed, less finished, their edges not suffering under incessant requirements for retail “activation,” but more adaptable to the needs and life of the community. They would be less determined and controlled by the state, but safe, and soft in their infrastructure and management.

According to Hannah Arendt, the “public sphere” has two interrelated dimensions. The “space of appearance,” a space of political freedom and equality that comes from the action of citizens in concert through open communications; and the “common world,” a shared world of human artifacts and settings that provides a backdrop of permanence and durability for our actions.

We are still searching for this inclusive public space for all our cities.