The Concept of Architecture in the Chinese Aesthetic Context

Western aesthetics is based on the mathematical analysis of an object’s formal structure, using classical beauty laws such as balance, symmetry, and the golden mean. Eastern aesthetics differ in that, as it emphasizes intuitive experience, such as “white space” in traditional Chinese painting, through emotional communication with the “imagery” to produce a certain “Conception.” The contrast between reality and emptiness allows the viewer’s imagination and feelings to flourish, allowing them to realize “showing the breadth of heaven and earth even in a square inch place.” 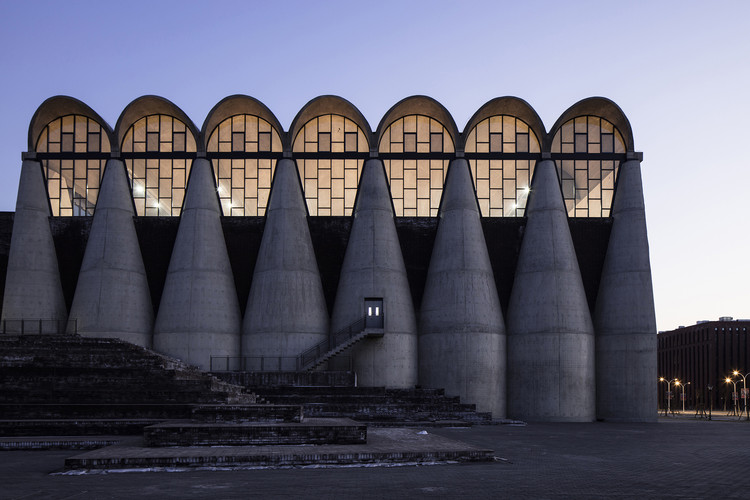 In The Analects of Confucius, “The Master said of the Shao that it was perfectly beautiful and also perfectly good. He said of the Wu that it was perfectly beautiful but not perfectly good.”The “unity of beauty and goodness,” that is, the unity of form and content, is at the heart of Confucius’ aesthetic thought. It can be translated into architectural aesthetics as the unity of form and function. Form does not have to completely follow the function, and function does not have to completely give way to form, but both must be in balance to achieve mutual success and harmony.

The project is located in Tangshan-Fangshan GeoPark. The concept of “folding” was inspired by the cultural lineage, and the path of visiting and wandering was planned within the limited space. The “Folding” idea creates a rich roof/ground form while the building itself becomes a piece of the fragment on the land. “Folding” amplifies the exhibition visiting experience in the limited space, removes the “Floor” limitations and forms continuous spatial sequences in the building. The application of “Folding” concept connects spaces into a whole, with a simple external form and rich spatial contents.

According to the respective fields regarding the plan dimension, headroom, and usage (dedicated or multi-purpose), the multiple indoor sports are compactly organized and connected by the linear public spaces (the public hall, the arch bridge, and the lobby of the swimming pool). The roof and the exterior walls of the sports space use a series of reinforced concrete structures of ruled curve surfaces, barrel arches, and conical surfaces which provide long-span space and high side window daylighting. The tectonic texture of the wooden mold concrete is exposed inside, and the architectural outline of silence and diversity is formed outside, achieving the perfect unity of the building’s structure, space, and form.

Confucius proposed the “golden mean” as the highest value principle of traditional Chinese thought. He said: “This Equilibrium is the great root from which grow all the human acting in the world, and this Harmony is the universal path which they all should pursue.” In art and aesthetics, the middle means that various opposing and contradictory individuals should be effectively and harmoniously united and that one should not one-sidedly emphasize one part of it to the detriment of the other parts.

The Museum is located at the southern edge of a newly constructed residential community, adjacent to the urban grid. The main staircase on the gallery’s southwest side begins at the city street and ascends to the second-floor outdoor terrace, which is connected to the community via a connecting bridge on the north side. This exterior crossing circulation is public and independent from the route in the museum. Both of them accommodate the use of the general visitors and local residents. The art gallery’s treatment of light also creates a contemplative space in the city. Through flow and space, the building balances the community and the city, the city, and the individual.

The architects have divided the cultural structures constructed in the countryside into a series of miniature vignettes. These cast-in-place concrete miniatures are interpreted into a series of tree-shaped spaces with tentacles reaching out for the sky, bathing in light and shadow. In one of these series, the library is located in the remnants of an adobe house in the village. The section curvature that jumps over the old walls links the first-floor entrance, the terrace, and the rooftop. The interior space functions not only as a stepped library but also as a small projection room. It creates a natural articulation between the old and new buildings.

Qintai Art Museum is located on the lakeside of Moon Lake in Wuhan’s Hanyang District, facing Meizi Hill across the lake to the south. In order to reduce the weight of the architectural mass on the natural surface of the lake, the form of an undulating natural terrain is used in the direction of the lake, while sinking part of the exhibition spaces underground. This both uses the underground space, and also minimizes the massing on the ground. These rooftop paths connect indoor and outdoor spaces. Thus, they form a public space framework independent from the exhibition spaces of the museum. The activities of the public are part of the architectural surface.

The Chapel of Sound nestled in a mountainous valley, look like a mysterious boulder that had gently fallen into place. The built structure’s form is a direct response to the site: an inverted conical structure, large at the top and small at the bottom, follows the form of the valley and falls gently to the valley’s bottom with a minimal footprint, minimizing the impact on the surrounding environment. The concert hall transforms into a sanctuary, establishing a strong bond between man and nature.

The Beauty of Pleasure

I Ching’s interpretation said:” The “image” is in the blooming of the “conception”, and if you get the ” conception”, you can’t stick to the “image”. In Chinese aesthetics, the mood is more important than form, and the beauty of pleasure is greater than the beauty of form. People can transcend the limited elephant by creating a spatial atmosphere and gain a philosophical feeling and comprehension of the entire life, history, and universe in a specific scene.

The Cloudscape of Haikou / MAD Architects

The visiting experience of the Cloudscape is similar. The architecture enables people to approach the building removed from our familiar urban reality, and begin a new journey transcending time and space. The building, quietly located between land and sea, is highly sculptural. The pavilion’s free and organic forms also allow for the creation of unique interior spaces, where walls, floors, and ceilings merge in unpredictable ways, and the boundaries between the indoors and outdoors are blurred. The complexity of the cave-shaped form deconstructs the space layer by layer, offering readers a weightless field to be inhabited by their imagination.

The brick kiln is not only the city’s origin but also the living and interaction space on which people rely. It “preserves the temperature of memory that is inextricably linked to city life.”Many gray spaces exist between the museum buildings and nature, which are intertwined, connoting the real and the imaginary, inside and outside. The spatial experience of visitors walking through the museum reflects the unique oriental aesthetics of traditional Chinese architecture’s “hiding, resting, cultivating, and traveling.”