The Aestheticisation of Inequality: Contrasting Landscapes on the Periphery of Mexico City

The region we know today as the Metropolitan Zone of the Valley of Mexico (ZMVM) has had a continuous and dynamic occupation for more than 4,000 years. Archaeological and anthropological evidence reveals the presence of complex human societies on the banks of the lake basin, starting with Tlatilco and Cuicuilco in the Preclassic period, passing through Teotihuacan in the Classic period, and culminating with the different urban centers of Nahua affiliation in the Postclassic period, with the cities of Mexico Tenochtitlan-Tlatelolco, as well as Texcoco, Azacapotzalco, Iztapalapa and Chalco, among many others, undoubtedly standing out. 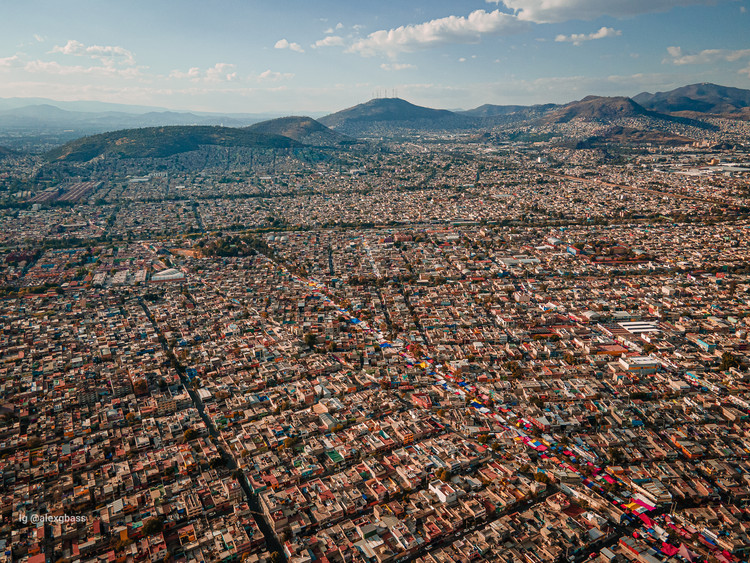 Those “so many cities on the water”, as Bernal Díaz del Castillo’s chronicle refers, made up a complex economic and social system interwoven with the lake ecosystem that at the time of contact with the West was known as Anáhuac, a place by the water . The establishment of the colonial regime and its continuation from the independent nation brought with it a regional ecological deterioration in order to privilege a centrality that omitted, from a vision biased by political power, the existence of its natural and social environment and defined itself as the only city, legitimising itself as the only entity capable of absorbing and devouring all the territorial and natural resources for its own benefit. Other urban experiences were historically denied, relegated to the margins of the narrative, to the periphery. This periphery has since become a resource of exploitation, territories of dispossession with no other use than to satisfy the needs of the central city, the capital.

At the beginning of the 20th century, the urban area of ​​Mexico City barely exceeded the polygonal area of ​​the viceroyal city, built on the outline of the pre-existing Mexico. After centuries of numerous and costly hydraulic engineering works to drain the basin, by the 1950s the lakebed presented an opportunity for development and settlement for both real estate speculators and the working class immigration that gathered to build the infrastructure that would bring about the “Mexican economic miracle”.

Undoubtedly, the urban explosion of the 1960s onwards could not be fully understood without mentioning certain particularities of the development of the country and its capital in the 1940s and 1950s. From the six-year term of President Miguel Alemán onwards, industrialisation, the beginning of a civilian culture that left behind the old military chiefdoms, produced a modernisation that determined urban expansion, not only in the capital, but in a good part of the country . The city’s modern housing came into being with constructions such as the Presidente Alemán Urban Center (CUPA), inaugurated in 1949, and Mexico City saw the emergence of important works such as the University City, a work that is difficult to surpass and which was inscribed on the UNESCO World Heritage List in 2007. The city was also endowed with road works such as the Miguel Alemán Viaduct and essential works for a modern city such as the Mexico City International Airport.
– Alejandro de Antuñano Maurer. “Five decades of Mexico City’s accelerated urban development”.

Today, what we know as the periphery has been shaped to fill in the gaps of a city with no urban planning. In some places, this was promoted by institutions such as INFONAVIT, which emerged as an institution that had direct agency over the construction of housing but later delegated these responsibilities to private capital resulting in what Jorge Taboada portrayed as “Paisajes Siniestros” promoted by developers such as Casas GEO and ARA in Ixtapaluca, Chalco, Los Reyes, La Paz, etc. In the east of the city, outside the city, almost inaccessible, without services and with no urban infrastructure.

On the other hand, towards the extreme northwest, we find the paradigmatic case of Ciudad Satélite, a real estate development designed from modernism, whose intention was to bring the “American dream” to Mexico, and intended to free Mexico City from housing pressure, but ended up becoming a magnet for countless subdivisions that suppressed rural and conservation areas and closed the gap between city and periphery.

Many “satellite” cities had the same effect, from neighbors like Balbuena, Villa Coapa and Lindavista, to the more celebrated and exclusive Lomas de Chapultepec, Pedregal and Santa Fe. The latter was erected in the west of the city on land that used to be a garbage dump where large corporate buildings and luxury flats were built without considering the working class who commute more than two hours every day to get there. This resulted in irregular self-constructed settlements where living conditions are very different, whose aesthetics have nothing to do with the buildings that rise dozens of meters above them.

By the end of the 20th century and the beginning of the 21st century, the neoliberal model of consumer culture promoted and imported from the United States brought the incorporation of gated communities to Mexico City. These gated communities materialized the alienating and paranoid mood of the most privileged sector of society that demanded exclusivity and distinction, through privatized spaces that could only be accessed by private car and with “services” and “amenities” for “distinguished clients” such as golf courses, equestrian and tennis clubs. However, these subdivisions also required service personnel to attend to their needs, which led to the irregularity of settlements on their margins to house their inhabitants. This aesthetic of contrasts that we see in Johny Miller’s aerial photographs reveal the power dynamics between those who hold the capital and buy the territory as a commodity and those who serve them and occupy the territory as a necessity.

The formalized aesthetics of these ambitions and needs are diametrical but, paradoxically, confluent. While in the subdivision clubs, post-modern architecture is promoted, with examples of revival as crude and kitsch as the “English countryside” style in the Condado de Sayavedra subdivision, to the ever-present predilection for neoclassical architecture that even derives in urban landmarks such as the now ruined Acropolis Lomas Verdes Shopping Centre, the Humanitas and West Point universities. On the other hand, the self-built dwellings of the marginal communities also respond to a yearning to belong to these “luxuries” and also resort, when possible, to plastic languages ​​that imitate these aspirations of “false wellbeing” found in the houses of their bosses.

Another recent example is Bosque Real, a complex currently under construction consisting of 900 new flats; it will be erected as a walled city north of the city in Huixquilucan, State of Mexico on high ground that promises a better quality of life and air quality than what is offered over the watershed. Homes ranging from 3 to 30 million pesos were considered and it will have the second largest university campus after Ciudad Universitaria. It offers extreme security and is sold almost as a dome that shields you from crime, pollution and contact with the real world.

It is possible to see different aesthetics within this analysis. In some areas, such as the east of the city, it is possible to see a large number of precarious self-built dwellings that respond to social and economic issues that are inherited, where several generations live. These aesthetics respond to different influences, on the one hand, as the artist Sandra Calvo points out, it is a phenomenon that responds to the remittances of families separated by the Mexico-United States border, where a translation or tropicalisation of certain gesture designs that are erected in a very different context takes place. Some others respond to simple practical and/or economic functions.

Today, Mexico City is a palimpsest of layers that are violently superimposed one on top of the other in the name of “development” and in response to overpopulation and the ferocious capitalism behind real estate. What does the aesthetics of these peripheries tell us beyond what is or is not pleasing to the eye?

This article is part of ArchDaily’s Topics: Aesthetics. Each month we explore a theme in depth through articles, interviews, news and works. Learn more about our topics. And as always, ArchDaily values ​​the contributions of our readers. If you would like to submit an article or artwork, please contact us.

Leon Villegas (Mexico City, 1987). He is an architect by UNAM with studies in architectural heritage restoration. He develops his practice from critical writing, as well as from the design and edition of books and publications on architecture. His main interests are cities – their history and their future – as well as the artistic practices and possibilities they allow from the public and collective. He is a synthesist and multidisciplinary artist under the name: ACOLMIZTLI.

Monica Arellano (Mexico City, 1994). She graduated from the Faculty of Architecture, UNAM (2019). Currently Editor at ArchDaily. She has participated in several kinds of research and congresses related to the state of education and the museographic design of exhibitions on the memory of Mexico City. Contributor to various printed publications on architecture and poetry. She has participated as a dancer in workshops such as “Arquitectura Móvil” (2017) directed by the choreographer Edwin Vargas (Colombia), coordinated by the Centro de Producción de Danza Contemporánea (CEPRODAC) and “Lo personal colectivo” (2018) by the choreographer Isabelle Schad (Germany).