Immense fame, especially when left behind by a deceased artist, may lead to a hierarchal understanding of their legacy—leading one aspect to overshadow other crucial dimensions of their life and oeuvre. Brooklyn-born Jean-Michel Basquiat’s meteoric recognition as an artist and a cultural influence throughout the 1980s led to his energetic mind-map-like paintings being acquired widely by museums and private collections alike, in addition to being mass-marketed in a variety of products, such as fast-fashion clothing and New York-related souvenir items. Basquiat: King Pleasure, a new exhibition organized by Jean-Michel’s sisters, Lisane Basquiat and Jeanine Heriveaux, breaks down the myth surrounding the late artist’s legendary rise from the gritty streets of 1980s New York to a rarely-achieved artistic success. 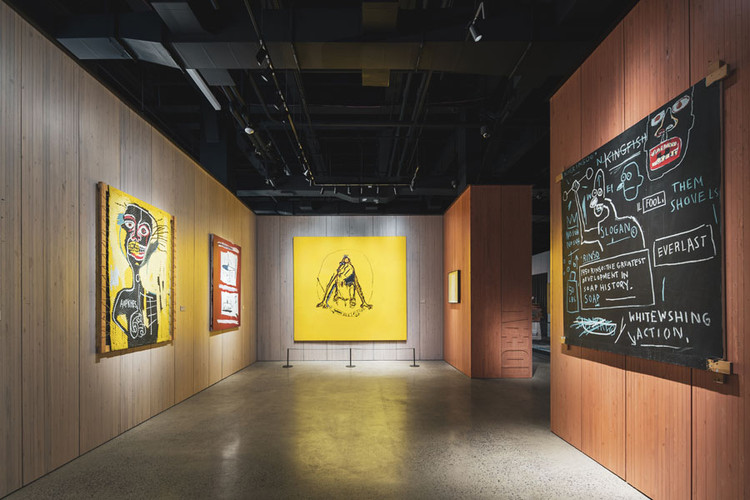 The show’s opening text by Heriveaux explains that the exhibition came out of their conversations about the “need” to exhibit their family collection to tell their own version of their brother. In addition to over rarely-shown 200 paintings, drawings, and never-exhibited ephemera by the artist himself (all supplied by The Estate of Jean-Michel Basquiat), the show includes art made by a close friend, Andy Warhol.

What’s exceptional about the show are not only the works on view but the exhibition design by Adjaye Associates. Within Chelsea’s Starrett-Lehigh Building, the firm recreates––to great effect––the artist’s childhood home, his Great Jones Street studio, the downtown streets he stomped, and the Michael Todd VIP Room of the legendary Palladium nightclub. “Using architecture as a device for storytelling,” founder and principal Sir David Adjaye explains about his intention to portray Basquiat in an unexplored way, “A story that transcends the popular understanding of Basquiat as a rogue urban street artist whose rise to stardom was first within the art world.”

The main goal for the British-Ghanian architect was to “contextualize the references and influences that shaped his practice,” rather than presenting him as a high-demand art star collected “as trophies because of their value.” So, building a typically sterile white cube gallery was off the table. Instead, the studio’s intention was to orchestrate “a sequence of contextual, thematic frames through materiality, tonality, and form that speak to the distinct stages of Basquiat’s life.”

The artist’s acrylic and oil stick on wood paintings hang on nail-laminated timber gallery walls with rounded corners. The dark tone of the walls falls into an unexpected harmony with the artist’s era-specific color palette and themes that depict New York City with all of its beauty, brutality, and mayhem. Unlike the city streets back then, the show prompts a regulated experience with art and artifacts placed in a neat exhibition format—drawings hung in a salon-style; paintings lit in a professional art show fashion—but the set-like displays of Basquait’s home and studio and wooden walls as opposed to white concrete create a capsule experience.

The exhibition provides an “Intimate, interpersonal narrative of a young Black man born into an immigrant Black family in Brooklyn who was powerfully influenced by his context,” Adjaye notes. Before he made his way into the elicit SoHo gallery scene, it was important to convey Basquiat’s Haitian and Puerto Rican upbringing through a recreation of his middle-class home. “A firsthand feel of the artifacts that provide a tangible memory of him,” according to the architect. In addition to family heirlooms, such as toys and early undated sketches, Adjaye incorporated intimate objects such as the artist’s bicycle as well as sculptures and objects the architect brought from Africa.

Adjaye Associates invited the Italian furniture manufacturer, Arper, to helm the recreation of Palladium’s famously exclusive Michael Todd VIP Room where Basquiat’s commissioned paintings served as a backdrop to figures like Grace Jones, Bianca Jagger, or Warhol. A 30-channel screen runs footage from the Heydays of the club while an era-specific soundtrack fills the large room furnished with pieces from Arper’s Mixu, Steeve, Pix, Wim, and Ply collections. To match the room’s nocturnal theme, the manufacturer here switched their usual bright shades of orange, red, or green with darker moody tones of ashy black and burgundy, which according to Arper’s CEO of Americas, Amy Storek “pays homage to the aesthetics of the eighties in a nightclub setting.” Two large Steeve lounge sofas and playful Pix ottomans are inviting for those in need of ending the ambitious tour with some lounging. While the space’s massive scale and the clean-cut finish veer away from the intimacy of an atmospheric nightclub nook, the display of furniture along with the music and Basquiat’s massive painting for Palladium salutes created the bygone energy on the intersection of nightlife and contemporary art at the time.

Practical sustainability is yet another element behind the exhibition, which is anticipated to travel after its New York run. “The reuse of wood walls not only mitigates the need for new materials and decreases contribution to land-fills but also sequesters carbon in sustainably forested timber,” Adjaye explains. Beyond a diaristic aesthetic, the paneled structure allows for swift re-installment of the show elsewhere. “The circular design eliminates the need for any type of remanufacturing and simply requires deconstruction, transportation, and reconstruction.”

As the show’s opening text makes it clear from the start, King Pleasure is not an academic or institutional exhibition about one of the most well-known artists of the 20th century, but rather an immersive experience that tops off the already-known about Basquiat the cultural icon with intimate anecdotes. Adjaye’s identity and narrative-first approach—from his design for the Smithsonian National Museum of African American History to the upcoming Studio Museum in Harlem—makes his firm a fit for an exhibition invested in storytelling. The architectural uniqueness, which remains theatrical in a perfect dosage, helps this distinction stand out, backdropping the family’s version of a story believed to be known by many.

This article was originally published on Metropolis Magazine.