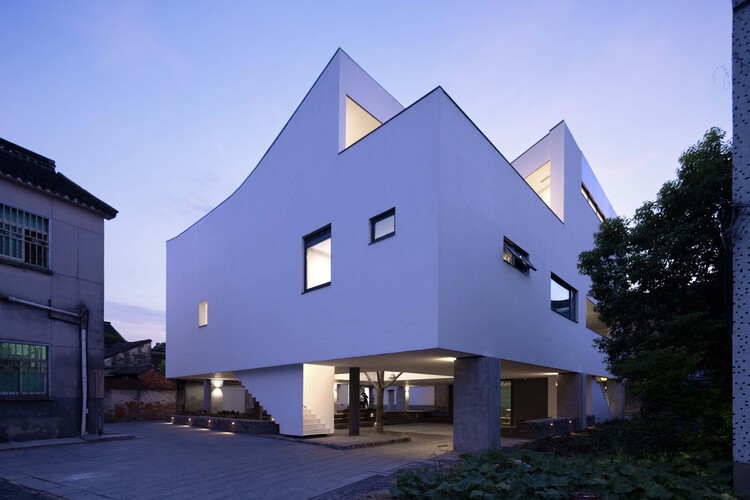 “Let’s make a roof where we can see the sunset and the Grand Canal,” a simple and slightly exciting sentence when the site was first surveyed in the spring of 2020, sent a beautiful vision of the community center at the beginning of the design. Located on the old street of Bache in Wujiang, Suzhou, just a ten-minute walk from the canal, the community center is actually the first in a series of micro-renewals of the old street. The main motivation for the micro-renewal of the street was the upcoming completion of the future campus of Soochow University across the canal, and the leader proposed to turn Bache Street into an Academy Town, expecting the future students to become a new force in the street, bringing new opportunities for the renewal of the street. With such expectations, the small community center, as a public activity space, becomes a key vehicle for the integration of the old and the new, and it is no exaggeration to say that a small building takes on a big mission. We often joked later that this was a house with ambition.

“The Floating Living Room.” Originally developed from a small town on the banks of the Grand Canal, Bache experienced rapid convergence and development during the Ming and Qing Dynasties, becoming a street in the administrative district of Wujiang District, Suzhou. Old Street is the core hinterland of Bache Street, which is also the location of the early market town. Therefore, the buildings in Old Street are of different ages, including wooden structures and stone bridges of the Qing Dynasty that have been preserved to this day, as well as new buildings built at the end of the last century, with a mix of housing styles and materials, typical of a Jiangnan town. Although it is located in the affluent fish and rice town of Wujiang, most of the old streets in Bache can only be seen by the elderly and children on weekdays, while the young people have gone out to make a living. The old street is in urgent need of vitality and renewal, and the introduction of the future campus of Soochow University across the canal brings the possibility of renewal and iteration. As with a large number of small towns, Bache Street belongs to a high-density residential settlement. Although there is interest in winding paths, also can not help but feel cramped and narrow everywhere. Also, because of the issue of housing ownership and construction land index, the final location of the living room is precisely in the heart of the old street. A dilapidated school building must be demolished and a new parlor built. This undoubtedly gives the design and construction a steep increase in difficulty.

Faced with such a “dilemma”, the first idea that came to mind at that time was to make the house “float”, using the ground floor elevation as a strategy to make the house lightly off the ground, so that people who come here will no longer be wrapped in the confines of the alleyway, but will experience a sense of openness and permeability. In order to make the elevated space as open and unconstrained as possible, a steel frame structure was chosen to a large span, and a column was removed from the central part in consultation with the structural department to give the elevated space a “column- free” feel. However, it is also because of the choice of steel structure, to the already difficult construction conditions brought a new challenge, lifting steel lifting equipment can not enter the construction site through the narrow alleyway, for this reason also had to demolish a few dangerous houses , to be able to open the way for the construction. But in hindsight, this is more or less a blessing in disguise, the passage space formed by the open road is also considered to be the living room from the tightly wrapped release, breathable.

If the elevation is to “breathe”, then the sinking is to “stay”. The elevation of the elevated floor is 60cm lower than the surrounding ground, forming a “both elevated and sinking” courtyard. The steps around the courtyard are built with old bricks, which weaken the hardness of the sinking boundary and strengthen the sense of cohesion and affinity of the place, without destroying the sight lines inside and outside the courtyard, and without creating a sense of tension at the bottom of the pit. In order to give the building a lighter floating feeling and reduce the oppressive feeling of the volume of the second floor overhead, a 5cm “small neck” was set at the intersection of the column and the roof of the elevated floor, which looks like a shock absorber. Although it is only a visual “blindfold”, this small treatment will really make the building overhead look lighter. The stairwell on the second floor is similarly recreated, with the galvanized steel plate at the bottom disconnected from the ground by 15 centimeters, and the beam in the center of the stairway hidden by the steel plate, so that the stairway looks like a slow descending boarding ladder, adding a sense of suspension to the volume of the second floor. When the community center was first opened, it coincided with a rare and sustained high temperature for decades, and the breeze from the elevation and the wind-pulling effect of the atrium made the elevated sunken courtyard a perfect place for the residents of the old street to cool off. The courtyard continues to bring life to the street as the elderly play with their children and choral performances are often held by community groups.

“Plant a ginkgo tree.” In the atrium of the elevated courtyard, a ginkgo tree was transplanted. The reason why a tree was planted here is, to say the least, just an emotional decision, I always felt that with a tree there, the house would be more alive. At that time, the selection of the tree is also a lot of trouble, because the height of the tree and the house had to match, in order to achieve the “first floor to see the trunk of the tree, the second floor to see” the crown, the roof to see the top of the tree” this shift layer to see the change in the landscape of the tree, is also a good way to expand the depth of field in a small house. Choosing a deciduous tree is also to expect the change of seasons to be distinctly perceived in such a small courtyard, and it is also a great thing to think of the yellow leaves in autumn. After the house was completed, the subtle relationship between the straight tree trunk and the structural column of the overhead floor was also an unexpected surprise. The presence of the tree trunk gave the column a certain natural softness, and for a while it was a little unclear which was the tree trunk and which was the column.

The second floor is the main interior space of the community center, mainly used for open functions such as reading, meetings, and exhibitions, and also a children’s reading space on the third mezzanine. In order to make the space flexible enough and adaptable to future use scenarios, the space is not clearly and strongly separated, and the only thing that can be strongly perceived is the ginkgo tree. The tree is stored in a glass box on the second floor, standing quietly in the atrium enclosed by the glass curtain wall. We used ginkgo to create an inward-looking landscape on the second floor, but of course, did not give up the opportunity to dialogue with the external landscape. The two vertical windows with a height of 4m8 on the southwest façade of the community center create a guided outward-looking view, fully perceiving the view and state of the old street.

“Rooftop looking over the canal.” The form of the roof is a slight curl, both to form a harmonious and different way of dialogue with the common form of the old street’s sloping roof and to make the roof terrace experience more relaxing and natural. In fact, the perception of this curl starts from the interior space on the second floor. In order to make this perception clear and real, the form of the interior ceiling on the second floor does not smooth out the change in elevation of the roof, but follows the curve of the roof and raises a curve leisurely in the interior as well. For the smoothness of this curve, the direction of the bridges and ducts has also made a lot of brainstorming. The change in ceiling elevation also follows a small mezzanine on the north side and creates a kind of confrontation and dialogue between the second floor and the mezzanine.

The height of the roof was carefully measured during the design, and the elevation of the main terrace was controlled within 10 meters, which is just high enough to cross the ridge of most of the houses in the old street and form a distant view, but not so high as to control the surrounding houses in terms of volume and block the sunlight. However, the height of 10 meters is not enough to see the Grand Canal clearly, so we reinterpreted the form of a tiger window on the roof and turned it into a secondary terrace that can be used for people, and the height was raised to 13.5 meters so that the viewer can easily cross the whole old street and see the busy Grand Canal in the distance. Bache originated from the Grand Canal, which is the root of Bache. We hope that on this roof, people can feel the presence of the Grand Canal and see the roots of a canal town. At the same time, we can also joyfully perceive on the rooftop that the future campus of Soochow University, which has been completed on the other side of the canal, will be the source of vitality for Bache Street as a future academic town. Standing on the community center’s roof, it is both a look back in search of our roots and a look ahead to open up the future. “Where did Bache come from and where it will go”, our follow-up question, seems to have been answered.