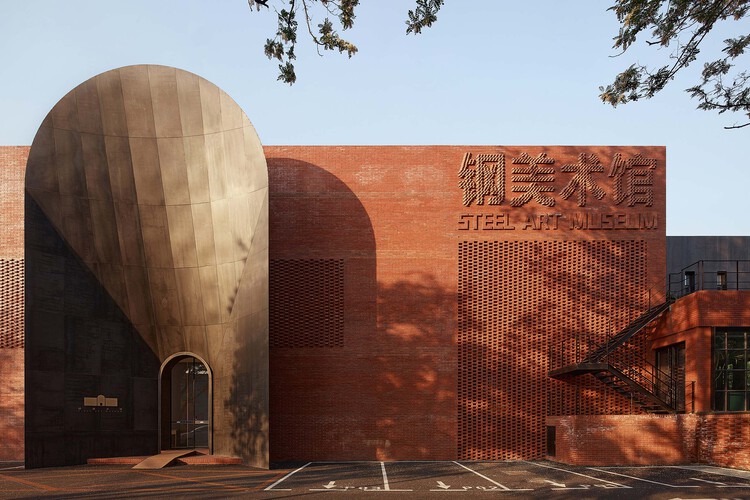 Text description provided by the architects. The architectural renovation project “Steel Art Museum” designed by SSAD Studio led by Liang Chen and Wang Shixue has been completed and put into use in January 2022. The project is located at No. The project is located at No. 3 Huying Street, Anshan City, Liaoning Province. It was originally the auditorium of the Ansteel Party School Club. This building was constructed starting in November 1983 and was completed and put into operation in October 1985. It has 730 seats and covers an area of ​​about 2,400 square meters. The total construction area is 1,050 square meters, and the renovated building area is 2,130 square meters. The whole building is made of red bricks. There are exhibition spaces, artist studios, design studios, café bars, restaurants, and other multi-functional formats inside. As the first art museum in Anshan City that focuses on the ecology of contemporary art, Steel Art Museum shoulders the dual mission of both an urban art landmark and a cultural sharing platform. In today’s era of magical prevailing light materials and soft culture, the hard-core steel narrative that exudes the smell of coal can always trigger the public’s imagination of stories. However, the stagnation of the nostalgic complex brings about the “siege effect”, the self-dissolution of local culture occurs and the impact of the emerging culture fails. To put it simply, the old has gone away swiftly and the new has failed to fill in. In the context of the spasm of various ideological values ​​and the weakness of traditional activation strategies, this renovation questioned again the rapid alienation of architecture and the flattery after secularization in the general society. It is expected to complete the reflection and discussion of several propositions in the text form such as contemporaneity, architectural ontology, and urban activation on the basis of physical creation so as to form a multi-dimensional interpretation and attempt of space, field, and decision -making.

The art museum as a “vulnerable tool” for urban development. The project begins with the disagreement between the project stakeholders and SSAD Studio on the naming, site selection, and another preliminary positioning. The former is usually a biased understanding of the contemporaneity of art museums toward new trends and simultaneously is accustomed to repeating too many prefixes and suffixes to clarify their affiliation or to symbolize their authoritative attributes. Art museums are often regarded as mascots of development zones or weapons for urban gentrification but seem like alien monsters, and the people have no idea about how to deal with them, and most of them are “abandoned” in the wilderness to be developed. In addition to being the object of stare, the art museums cut off the connection with the historical context and become a tool for urban development.

The local expression of the art museum. SSAD Studio expects the inclusivity and extensibility brought by the fuzzification of its specific attributes. The single word “Steel” is both clear and ambiguous. Starting from the entity, it can be reminiscent of the abstract quality of the art museum such as the historical context of the region, the atmosphere of public space, and the style trend of art curating. As for the site selection, the design team abandoned the broad vision of the city’s edge surrounded by mountains and rivers, and set its sights on the interior of the industrial city, ie, the auditorium of Ansteel Party School Club surrounded by state-owned ” old public houses” in the 1980s. Against the background of the industrial age where collectivism prevailed and the city was devoured by factories, the public entertainment property of the club auditorium added a splendid touch to the gray background, and this renovation inherits the tradition of its open space. On the basis of effectively retaining the original industrial structure, it presents its historical value as a relic of industrial civilization and combines multiple functions such as exhibition, art studio, and coffee bar to form a new expression of public space and emphasizes the design of public use and the identity of “people” and “art museum” to open up the possibility of revitalizing the lonely city.

The urban expression of the art museum. For visitors who come to an unfamiliar public space or city, modernism makes the art museum an ambiguous urban landmark, and the first thing that gives this ambiguity a clear picture is the building’s facade. SSAD Studio preserved the original modernist architectural form in the 1980s. On the basis of the original building structure, the red bricks and weathering steel representing the atmosphere of the old industrial base are used as architectural regional elements, and the characteristic of “hollow”, “flat” and “protruding” elements on the building skin by adopting contemporary design logic endows the building with a unique temperament and creates an artistic birthplace with a strong industrial atmosphere.

The stage entrance among the residences. Deep in the residential area of ​​the base, the surrounding residential atmosphere has naturally built a wonderful theater for the art museum to switch between multiple scenes. Visitors enter the museum from the giant steel arch on the west side as if passing through the ruins of the Athenian temple or stepping on the projecting lights on the stage. From paying close attention to others to caring about being noticed by others, the instantaneous transformation of subject and object is accompanied by the mutual transition of lifestyle streetscape and ritual space, and the prelude to the spatial symphony has already sounded.

“Persistence of vision” of the double spiral staircase. Through the main entrance, a double spiral staircase is presented with rich installation meaning. As the core of the interior space, it is the passage linking the two-story exhibition hall space. It not only meets the functional requirements of the moving line but also has a dramatic sense of sculpture. It is both a space and a landscape. The double-spiral staircase starts from two entrances, gradually rotates, extends, and releases into a single exit on the second floor. The difference in walking speed makes the sight lines between the two entrances overlap, stagger, and look at each other continuously, and the rotation of the body is ahead of the timely update of the sight line, which causes temporary confusion in the visual logic and forms a dynamic “visual persistence” effect in the three-dimensional space, and it thus forms a random interactive space experience of seeing and being seen in the vertical direction.

A tragic counterattack of architectural ontology. The continuous “erosion” of modernism has accelerated the alienation of the architecture noumenon, and the “legend” about the stairs has gradually been forgotten. Classicism once used the stairs as a space stage to repeatedly describe the drawings, and the former modernism also used it as a space element, comparable to the floor slab and the column. However, the commercialization of architecture has brought about the fanatical pursuit of space utilization, which makes gradually buried in a corner of the building or as a fire stair become a dogmatic role in coping with norms and ignores the possibility of it becoming the protagonist of space as a space element. In this renovation, the staircase is regarded as the “absolute protagonist” of the space, which entitles it to be a “heroic color” and cancels the division and occupation of the space by other walls and pillars so as to allow it to reverse its posture in the center of the stage, play a sword-dance, and declare its sovereignty.

Naive expression of the native structure. For the original building, SSAD Studio chose to simply expose the original truss structure. The industrial properties attached to the truss structure give rationality to the spatial scale, while the visually smooth linear steel structure and the rough red brick wall present a unique space tension. While preserving the original historical appearance, it adds noise to the overall visual effect, becoming part of the intuitive experience of the space, and intervening in the space as a “relic” to stimulate the visitors’ collective memories and sense of belonging to the industrial heritage.

Multidimensional expansion of landscape vision. On the south side of the building lies an independent courtyard. SSAD Studio preserved the existing trees in the courtyard, opened up the courtyard walls, and arranged weathering boards at a 45-degree angle to form a shutter effect. On the street, the looming building can be seen through the tall trees. The courtyard landscape is designed with still water, and the relationship between the building and the trees is reflected in the still water landscape. With the slow unfolding of the field of vision, the entire picture forms a multi-dimensional spatial image presented in front of our eyes. The design team took into account the characteristics of the northern climate. In winter, the inner side of the still water pool becomes a pool bottom stacked with schists, forming a dryland landscape. Liang Chen, the chief designer: for urban construction, it is not to tear down and rebuild, but to give the city a “regeneration.” I like the word “regeneration” very much. It has vitality, and I am still full of curiosity about things with vitality. The buildings in the 1970s and 1990s will become our historical buildings in the near future. These buildings carrying the memory of a city may have been eliminated by the current urban development in terms of function and format, but it does not mean that the erasing of the memories should be taken for granted, and we should protect them in good conditions. Although it is said that “a generation will eventually grow old, but there will always be people who are young”, this is inheritance. No one is born as ancestors, and ancestors also need generations of descendants to improve and supplement and become a real cultural heritage and accumulation.