With 80 per cent of buildings projected to exist in 2050 already built, Lang wrote the book Building for Change: The Architecture Of Creative Reuse to draw attention to the need to creatively reuse our existing buildings if we hope to reach net-zero emissions by mid -century and avert the worst effects of global warming.

Reuse “a provocation to be more inventive”

“Focusing efforts on new build constructions alone can only have 20 per cent of the impact required,” said Lang, who is an architect and teacher at the Royal College of Art and the London School of Architecture.

“The exciting thing for me was how this isn’t a constraint on creativity, but actually a provocation to be more inventive in using what we already have,” she told Dezeen.

Preserving the embodied carbon of existing structures is becoming more of a focus for architects and environmental groups, with high-profile projects including the M&S Oxford Street redevelopment facing critiques over relying on demolition.

Ten ways in which architecture is addressing climate change

Lang believes that studios need to rethink their approaches toward reuse with greater training and willingness to challenge briefs to stop bulldozing from being the “go-to approach”.

“We now need to reconsider projects at the briefing stage, to identify how the design will respond not only to its immediate future but also the impact it will have on future generations,” she said.

“I’m hoping that the project profiles will give some more insight as to how the aims of creative reuse can be delivered in practice,” she continued.

“We rarely talk about the processes involved in delivering schemes such as these – especially regarding the complexities of creative reuse – as we tend to merely celebrate the end result.”

Renovation can have “a financial and environmental bonus”

The book explores different approaches towards reuse and contains numerous case studies from around the world that she hopes will expand architects’ and clients’ thinking on the subject.

“I’m hoping that clients and building owners can be convinced that reuse doesn’t negatively impact the overall quality and creativity of the proposed scheme, and can instead have a financial and environmental bonus,” she said.

“If we can all begin to consider the opportunities for reuse from the outset, we’ll open up new territory for creative approaches which we might not ordinarily consider.” 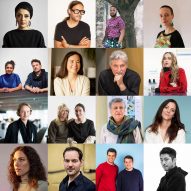 Fifty architects and designers you need to know on Earth Day

The buildings contained in the book all intend to show an optimism view of reuse, which aims to create buildings that continue to function for generations.

“The projects I’ve been researching seem to unlock a whole new set of values, particularly around the character, history and emotional attachment that becomes associated with the buildings we interact with as part of our day-to-day lives,” explained Lang .

“Although it was one of the premises of modernism, very few people want a blank slate in that respect. By seeing our buildings as aggregates of these values, alongside their carbon consumption, we must place consideration for what we are passing on to the next generation at the heart of architectural design,” she continued.

“The buildings I’ve included in the book all set an optimism territory for this experience which will stretch beyond our own – and I look forward to more following suit.”

Below Lang highlights six buildings that demonstrate these ideals:

“Although the first impression of Herzog and de Meuron and Purcell’s transformation of the historic police and magistrates site is of the new build insertions, the project has put as much energy into the retention and integration of the existing structures.

“Extensive testing and forensic research into the traditional ways of the building was undertaken, as no records were available from the construction. When they discovered the reinforced concrete was unusually made of bundles of wires, lab checked the structure was sufficient for its new use , which saved it from having to be removed.

“These have been sensitively augmented with subtle new structures, to enable them to meet current building standards. The new aspects of the scheme adopt innovative forms of reuse, too, recycling alloy wheels to form the distinctive aluminum bricks for the new auditorium.”

“The reworking of the materials that characterize this transformation of an old recording studio into a restaurant space has given rise to a sense of social rehabilitation, too.

“The designers worked collaboratively with local craftspeople to reinterpret old techniques – such as creating adiabatic cooling systems – and helping them to identify new applications for their skills.

“They experimented with different techniques to transform strip lighting into chandeliers, construction waste into furniture and electrical offcuts into door handles. The result is an innovative interior with a tiny carbon footprint and an ongoing social legacy.”

“Alongside the environmental value of retaining the concrete silos, Heatherwick Studio’s team recognised the social value the building made through its controversial history of trade and extraction.

“To retain and repurpose the existing structure demanded huge amounts of work to be undertaken including extensive surveying of the concrete tubes, which were found to need repair.

“A new 200-millimeter-thick concrete inner sleeve was added using 8,500 cubic meters of concrete and required almost 1,200 workers on site for 5.3 million man-hours over the course of 36 months. It takes a lot of work to make something appear so simple.”

“This project proves how an abandoned construction doesn’t have to be a dead end. To reuse the derelict concrete frame of an aborted house construction, the architects set about surveying the extent of decay to see how much additional structure would be required to turn the intended private dwelling into a community space.

“Rather than impose their design vision upon the site, this required them to look, experiment and adapt, transforming the design process. The resulting timber structure has been sized accordingly to a neatly span upon the found structure, requiring little demolition and using bespoke joints to form the interface between old and new.”

“Although great projects for provoking design innovation, the pavilions of biennales and exhibitions have long been identified as being materially wasteful. SelgasCano and Helloeverything’s commission for Copenhagen’s Louisiana Museum sought to address this by designing a pavilion (above and top) with a legacy use in mind.

“The scaffolding structure used netting, chipboard and sheets of polycarbonate plastic with water containers as ballast for the structure – materials that could be found and put to use by the local community in its intended new home in the largest slum of Nairobi, where it will provide much-needed facilities for education and entrepreneurship.”

“This was one of the initial inspirations for the book project. I was by fascinated how DK-CM had taken the brief for a new building and demonstrated how a strategic process of rehabilitation and reuse would bring greater value for the client – ​​not least because it would save them the enormous cost of hiring portacabins.

“It takes huge bravery to provoke a client into questioning whether they need a new building, giving up the opportunity for creating one of those eye-catching new build schemes that often grab awards and headlines in the press, and instead turning your efforts into a much more labor-intensive process of surveying and rehabilitation.

“Yet the values ​​they have brought are multiple – in the environmental benefits, the social connections forged with the community and in setting an example that reuse can be achieved to such high standards on a grand scale.”