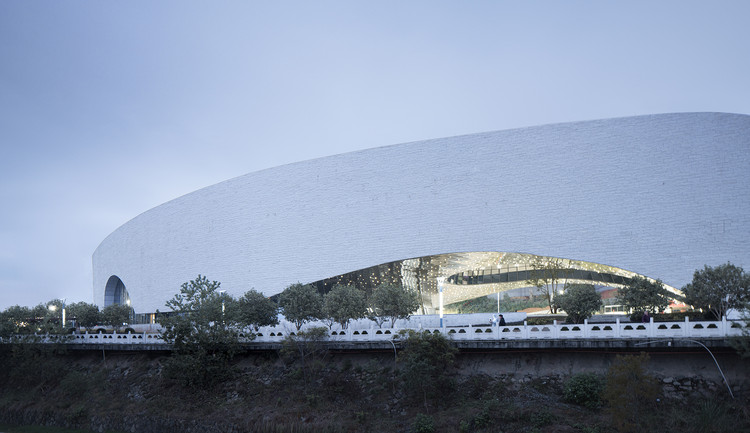 Text description provided by the architects. Shunchang Museum is located in a county that features a unique location. As approaching the project, the architects studied the internal connection between the site and the city, balanced the local context with metaphorical creation, and worked to let the building integrate into local citizens’ daily life and carry the memory of those who’re residing in places far away from their hometown. Designed in response to a local context and based on a people-centered principle, the museum is not merely a space that collects and displays exhibits. For the city where it sits, the museum itself is an exhibit, platform, and symbol. It carries the nostalgic sentiments of local people and interprets the past and future of local culture. The project is located in Shunchang County, Nanping City in Fujian Province. Shunchang is surrounded by mountains, with Futun Stream passing through. The museum is sited in a core urban area, with its south side facing Longshan Mountain across a road and overlooking the Monument to People’s Heroes in the distance, and the north side adjoining a waterfront walking trail along Futun Stream. The plot stretches in an east-west direction, with a limited depth in the south-north direction. Featuring a spindle-like shape, it sits in between mountains and water. The programs of the project mainly include a museum, an urban planning exhibition center, office rooms, and cultural relics storerooms. Meanwhile, with consideration of the operation of this venue, the architects engaged in functional planning and positioning and added some extra functions such as an auditorium, book bar, and cafe. As a common county-level museum, Shunchang Museum accommodates no key well-known collections, so the entry point and focus of the architectural design was shifted to let the building integrate into citizens’ daily life and carry the memory and nostalgic sentiments of locals especially those leaving their hometown. This place embraces the view of mountain and water landscapes and evokes a sense of nostalgia.

Design strategies. 1. Connectivity and openness. In line with the long, linear plot sitting in between mountain and water, the architectural form ensures the connection between human flows and the walking trail along the stream, and dialogues with the surrounding natural landscape in a positive gesture. Taking the architecture as a medium, the design team constructed a “traversable urban garden”, which opens to the city in multiple dimensions and connects the mountain and stream.

2. “Urban living room”. Considering that the project’s site is a key node of the slow-traffic system along the stream, the architects lifted the ground floor of the building to form a large transitional space, which is available for accommodating a large volume of human flow and extends to the bank of Futun Stream. This area creates an “urban living room”, which blends into the urban setting in an open gesture. This place is enlivened by skateboarding boys, singing buskers and dancing groups. It provides a venue for the citizens’ daily life activities and cultural events, and in turn is enriched by the citizens.

4. Urban terrace. Through big steps, the riverside walking path connects and extends to the building’s rooftop, forming an urban terrace that provides a panoramic view to the fascinating scenery of the mountainous county. To create a complete accessible rooftop, the architects arranged architectural equipment in a reasonable way. The atrium surrounded by the architecture’s external walls not only satisfies the daylighting demands for office rooms, but also meets the ventilation needs of equipment rooms. External units of the central air-conditioning system are set on appropriate outdoor positions in a concentrated way, which ensures no equipment installed on the rooftop.

5.Preserved tree. An existing big tree on the site is retained and moved to the center of the “urban living room”, to absorb sunshine and create a visual highlight in the space while enhancing a sense of affinity for the architecture. The big tree is a symbol of the site’s memory. While the varying external environment injecting new vitality into urban life and the presence of the new architecture enriching the citizens’ activities, the giant tree is a witness that carries stories of the small county both in the past and future.

Construction
1. Structural system. To maximize the openness of the “urban living room” and introduce natural daylight into the open-air atrium, the building adopts frame-shear wall structure, and is supported by shear walls on both sides. Through curved trusses that span 48m, an open column-free space on the ground floor is created. The oval-shaped atrium is the soul of the “urban living room”. However, the large void may cause incomplete structural space. To avoid this, the atrium’s east side is pulled up by short trusses, while its west side stretches downwards to connect with the ground floor, subtly realizing the initial design concept.2.Materials.In order to form a simplistic, massive yet modern architectural image, the project mainly employs stones, glass and specular stainless steel panels. Triangular specular stainless steel panels with a side length of 1,200mm are applied to the suspended ceiling of the atrium. Under daylight, the reflective suspended ceiling produces a mottled light and shadow effect, while also generating a distinct contrast with external walls which feature rough natural textures. In addition to recording the daily activities in the “urban living room”, the mirror-like ceiling also echoes the mountains and water in the surroundings, making people feel like walking into a painting reflected by mirrors.3.Stone techniques. Granites are applied to the main building body and the walls of the museum’s comprehensive hall, each piece of which has a size of 1,000mm*300mm and a thickness of 120mm, cut in a natural way. The minimum thickness is controlled at 40mm, so as to meet the mounting requirements of curtain wall bolts. All granites were cut manually, hence forming random natural textures and achieving a harmonious and unified effect after being put up on the walls. Simplistic and clean granite panels clearly outline the building’s curves. The arbitrary rough wall textures respond to the local mountains, revealing a unique charm between gracefulness and solidness.

Starting in 2017, the project took five years from the conception of design scheme to completion. However, the local cultural context and memories it carries have been lasted for more than a thousand years. The building is fused into local citizens’ life with a friendly and open way, evoking people’s resonance and imagination about the traditional cultural space.