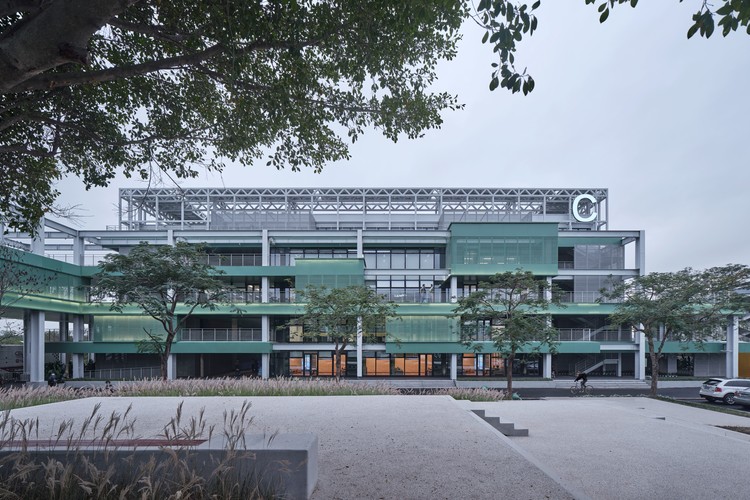 Text description provided by the architects. Shenzhen International Low-carbon City Convention and Exhibition Center is located in Longgang District, Shenzhen, China, adjacent to the ecological riparian of the Dingshan River. The three existing venues used to be the place for the first “Shenzhen International Low-Carbon City Forum” in 2013. In December of the same year after the renovation was completed, the “2021 Carbon Peak Carbon Neutral Forum and the 9th Shenzhen International Low -Carbon Forum” were held. The main bodies of the three venues (Low-carbon Exhibition Hall, Low-carbon Conference Hall, and Low-carbon Trading Hall) before transformation were steel frame structures. The venues were huge with monotonous and closed interior spaces. They were unable to meet the requirements of the conference for the organization of conference affairs and the display of low-carbon technology concepts. Under the constraints of the existing conditions, the design strategy of limited intervention is adapted to open the closed external interface, dissolve the huge scale of the venue itself, and connect it with the natural ecological shoreline of Dingshan River by softening and remodeling the site. Taking the Hall of Breathing, the Corridor of Vitality, the Boxes of Ecology, and the Hills of Growth as the overall planning structure, we will create a “low-carbon city” where we can breathe freely, grow naturally in the environment, and integrate truly green into daily life”.

The Hall of Breathing. We retain and enhance the main functions of the three main buildings: low-carbon exhibition hall, low-carbon conference hall, and low-carbon trading hall. Then, we transform and remove the enclosure components with potential safety hazards to suit with the environment. The ground floor space is opened to form the internal and external path association system that can be viewed and imagined. The original steel structure frames are retained and repainted to reflect the original features of the building and the concept of low-carbon architecture in a cool white color. The original walls partially retreat within the frame, and the facades are changed from closed to open, eliminating the sense of pressure on the environment caused by the huge volume. At the same time, we leave a lot of transitional areas between the site and the interior space to create an ethereal hall of breathing.

The Corridor of Vitality. We use the existing steel structure between the three venues to create a vibrant corridor filled with green. The Corridor of Vitality extends to the lake to link the low-carbon food collection transformed from containers and extends across the Dingshan River, which becomes an ecological bridge connecting the two sides. During the low-carbon conference period, it is a public service axis of the conference. In daily life, It is a leisure experience zone for people to live a low-carbon life.

The Boxes of Ecology. As an ecological box of functional units, it is scattered among the site and buildings. Some of them are stacked on the vitality of the gallery, as a place for people to break the conversation, some are placed into the architectural interior space, becoming office meeting spaces with the function of air ecological garden, while some others are scattered on the Landscape system of the site and Dingshan River bridge to become outdoor leisure viewing facilities, establishing the clue connection between the building and the site.

The Hills of Growth. The Boxes of Ecology spreads to the site and becomes the Hills of Growth with different characteristics. Among them, “Hill of Softness” is to soften the hard laminated water on the original site into the layer upon layer of ecological falling water. “Hill of Piled Stones” is a continuous landscape platform formed by the folding board system implanted on the original hard outdoor steps. “Hill of Trees” is a continuous and overlapping walking path formed around a raised banyan tree in the central courtyard. “Hill of Memories” is a winding and extending ecological experience path combined with a group of preserved trees. Different forms of these hills spread and grow on the site depending on the terrain, forming the landscape clue of the site.

Low-carbon Food Market. The Low-carbon Food Market is located between the main building and Butterfly Lake, which is a group of service buildings constructed by the splicing of container modules. The container units are prefabricated in the factory and assembled as a whole on-site, which is a kind of mobile unit-type ecological building. By combining the gray-white container volume with the gray-green corridor system, we create a modern courtyard space with different sceneries. During the forum, it can be used as a reception and light catering function, while as a supporting room for citizens’ leisure services at ordinary times.

Low-carbon City. With the design goal of “Nearly Zero Energy Building, Zero Carbon Park”, the building community itself has become the largest exhibit of the Low Carbon Forum. The roof of the main building adopts high-conversion monocrystalline silicon photovoltaic panels and high-efficiency inverters. The annual renewable energy output of halls A and B is greater than the annual terminal energy consumption. The renewable energy utilization rate of Hall C is 69%, and the carbon reduction ratio of the park is 95.3%. The design and construction process integrates 120 green and low-carbon technology applications, integrating green exhibition and experience, making the project a real “low-carbon city”.