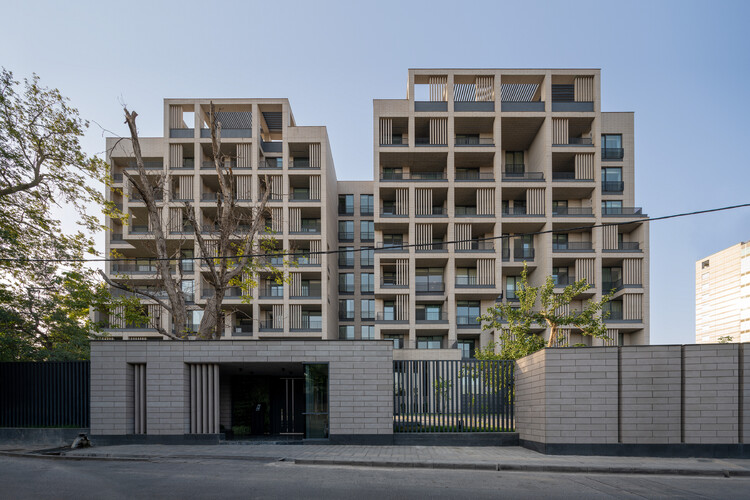 Text description provided by the architects. Sheikh Bahaei residential building project is located in Vanak, Tehran. This region, with mainly residential land use, is assumed among the quire valuable zone in Tehran metropolis. This building is constructed with a plot area of ​​nearly 4800m2 and a gross area of ​​nearly 30000m2 including a ground floor with a lobby, parking lot, and residential units at the same time, three basement floors with parking lot and welfare common spaces, and seven residential floors. This project includes a total of 77 residential units with a space area of ​​165-360m2. It should be noted that the project was referred to the counselor team for design and execution while the excavation phase had been finished and the foundation phase had been completed.

The main problem in relation to the project design was based on two major issues. First, how can the number of apartments that are adjacent to each other be reduced despite the numerousness of the apartments on each floor in order to avoid disturbing the residents’ comfort? Second, how can the density of the residential units in a complex with numerous units be represented in the main building facade as a factor of identity and function in order to establish integrity between the internal and external parts of the building? Apropos of the first issue, considering the relatively extensive plot width (almost 75m), two completely separate zones (from the ground floor upward) were assumed leading to the division of the plan of the residential floors into two blocks with 5 or 6 adjacent units . This resulted in better privacy of the units and less-populated and less-crowded common spaces and, consequently, more comfort for the residents.

In a parallel way and in order to represent the concept of density on the southern side of the project, the building facade skin, including the semi-open spaces, was added to the building, which played the role of a barrier between the urban open space and the closed space of the residential units. Dividing this facade skin into small-scale pixels not only represents the numerousness of the rear-side residential units but also improves the semantic and visual relationship of the building with its surrounding urban environment by creating spaces with a small scale in volume. The small-scale spaces also increase the possibility of the addition of greenery in the volume and, besides, improve the quality of life of the residents. Moreover, by changing the form and scale of the pixels, it is attempted to provide better coordination with the typologies of the residential units. For instance, yards with higher roofs were created for duplex units and also wider balconies were provided for bigger units. As such, by making the facade skin more flexible, this appended element was, in practice, dissolved in its rear-side volume and became an inseparable part of it. Furthermore, applying some changes to the existing structure resulted in a groove with considerable width and depth between the two blocks, the consequence of which was a clearer distinction of the blocks from each other.

An intervention to the design of the existing structure was the addition of the entrance space to the building, which indeed converts the entrance gate commonly used in residential projects into an intermediary space between the inner and outer spaces of the building. The formation of movement circulation in this entrance space along with the disabled ramp (wheelchair ramp) provides a different experience of entering a building for the audience and makes it an important subset of the building with an independent identity.

As for selecting the material for the building facade and considering the form-oriented approach of the main facade and the presence of the intermediary space in the balconies, which have been designed mainly as shader on the southern facade, it was decided to use a dominant material (industrial bricks with dimensions of 20*90cm) and avoid color diversity and visual disturbance as the main approach. Needless to say, brick is highly important both due to its outstanding history and background in Iranian architecture and due to its coordination and consistency with modern architecture. Also, complementary and neutral materials such as glass and metal sheets with smokey colors have been used in the composition of the building facade in this project. Moreover, as for the design of the details of the appended southern skin, the embedded louvers, on the one hand, are responsible for controlling the climate and reducing the southern and southwestern sunlight radiation and, on the other hand, provide privacy in some parts of the semi-open spaces (balconies) and, thereby, meet some of the welfare-related needs of the residents. On the campus of the building, a water fountain was built on an existing qanat (as one of the ever-lasting mementos of the Iranian civilization and architectural culture). As such, the passage of qanat water from the campus space towards outside the building was demonstrated to the users.

In the end, it should be noted that the designer team of the sheikh Bahaei project attempted to provide comfort for numerous residential units of the project, improve the quality of the light-passing walls by using porous skin in the building facade and creating a small -scale proportionate to the urban landscape, and also provide the ground for using greenery in the living space of the residents.