With architecture evoking a Bedouin tent, a golden vessel, and a sculptural boat, Qatar has seen the construction of astonishing stadiums ahead of the 2022 FIFA World Cup. The games will kick-off this Sunday, November 20th and will run until December 18th 2022. In celebration of the long-awaited tournament, designboom showcases a collection of the highly-anticipated stadiums, including those designed by Zaha Hadid Architects and Foster + Partners .

Designed by the late Zaha Hadid, the Al Wakrah Stadium is defined by its fluid, retractable rooftop. Inspired by the heritage of its waterfront context, the design mimics the sails of traditional dhow boats to highlight the traditional industries of Al Wakrah, including fishing and pearling.

Built for the 2022 World Cup, the stadium was inaugurated on May 16t, 2019, to host the Amir Cup Final, with local authorities reporting that all tickets inside the 40,000-seat stadium had been sold. The venue will host games up to the soccer tournament’s quarter-final stage was first unveiled back in 2013 with construction getting under the following year.

Designed by Foster and Partners, Lusail Stadium has for the first time been filled with spectators ahead of the FIFA World Cup Qatar 2022. Referencing the region’s vernacular architecture and the country’s ancient tradition of craftsmanship, the ‘seating bowl’ takes shape to suggest a ‘burnished golden vessel which sparkles against the sunlight’ .’ Triangular openings across the facade are a visual reinforcement of the bowl’s structural diagrid, forming a perforated screen to lend shade and filtered light across the interior concourses.

The building is topped with a ‘spoke-wheel’ cable net roof. With a diameter of 307 meters (1,007 feet), it has become one of the world’s largest tensile cable-net roof in a stadium, at once bringing environmental comfort and unifying the entire bowl under a single envelope. The roof’s outer compression ring is linked to a central tension ring with a complex system of cables. The team notes that ‘this method creates a wide-expanse roof without the need for supporting columns.’

Spanish studio Fenwick Iribarren Architects designed this Stadium 974 in Doha. The ambitious project comprises a vibrant assemblage of shipping containers and a modular steel structure. The 40,000-seat stadium, previously known as Ras Abu Aboud, is the first in FIFA World Cup history designed to be fully demountable. Seven matches will be played at stadium 974 during Qatar 2022 World Cup. 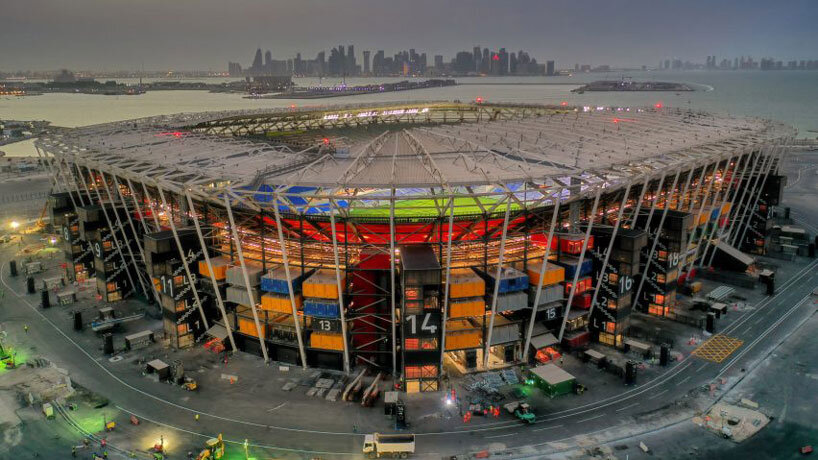 The Khalifa International Stadium marks the only pre-existing structure to be expanded for the 2022 FIFA World Cup. The site is located around six miles (ten kilometers) from the center of Doha and stands as the national stadium of Qatar. The redevelopment project is led by the building’s original architect, Dar Al-Handasah, who was tasked with designing and supervising the expansion of the stadium’s East Stand, all while maintaining the integrity of the national icon. Overall, the project will increase the stadium’s capacity to 40,000 visitors.

The project further saw the design and installation of innovative cooling technologies that employ 40% less energy, providing a cool and comfortable environment in the bleachers and on the playfield alike. Meanwhile, a massive new roof canopy was installed to provide cool shade for all visitors and athletes. 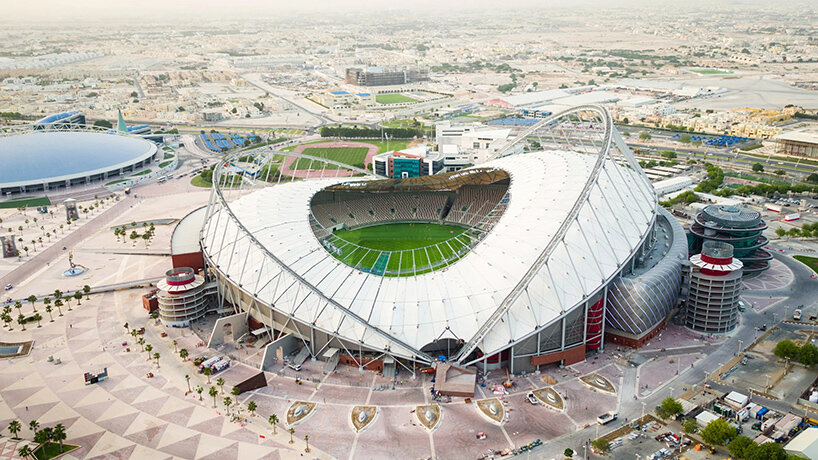 Dar Al-Handasah also took to the coastal city of Al-Khor to introduce the new Al-Bayt Stadium for the 2022 FIFA World Cup. The project — whose ‘tent’ enclosure consists of tensile fabric connected to steel cables — takes its name and form from the historic bayt al sha’ar tents traditionally used in Qatar. With this 60,000-capacity landmark stadium, the team ensures a sustainable design whose upper tier of seating will be disassembled following the World Cup games to be donated to developing countries in need of sports infrastructure. 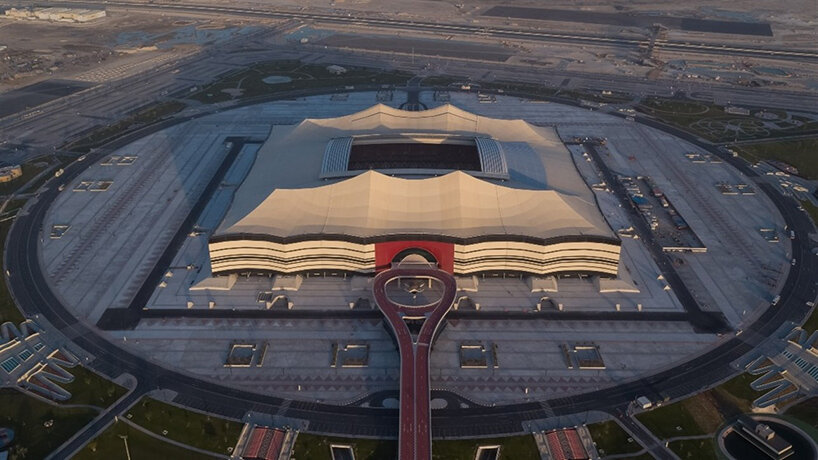 Located twelve kilometers south of Doha, the design of the Al Thumama stadium shows an intricately ‘woven’ facade. Taking inspiration from a traditional patterned Gahfiya head piece, the architecture is a clear celebration of Arab culture. 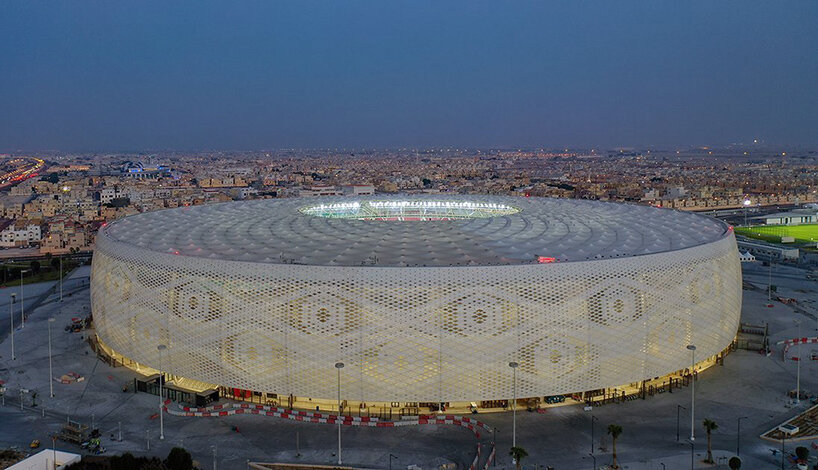 Located in Al Rayyan, twelve miles (twenty kilometers) west of Doha, the Ahmad bin Ali stadium It integrates cultural symbols of Qatar into its architecture. With a design by BDP Pattern and Ramboll, the structure is at once recognized by its lightweight, lattice facade, whose patterning is woven with meaningful imagery from the region. The stadium will host 40,000 visitors beneath its lightweight roof canopy. 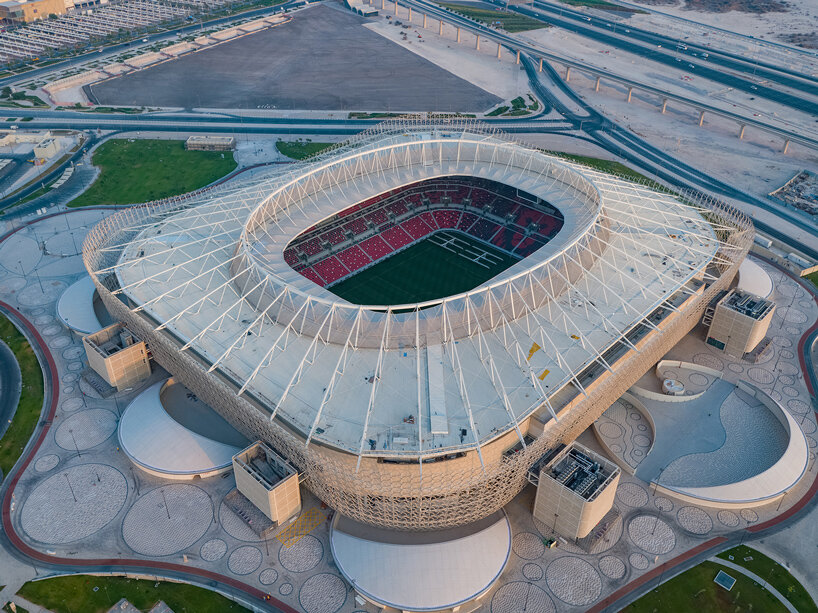