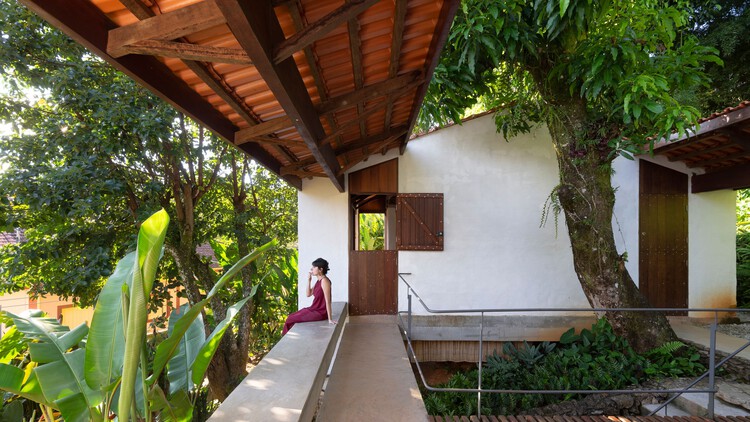 Text description provided by the architects. The design challenges of the São José do Barreiro house were not linked to the development of a daring structure or even sophisticated technical detailing. Nor should the greater effort be credited to the manipulation of the wind, the directing of natural light, and the framing of the landscape – even though these are fundamental strategies for the conception of its spatiality.

In this case, what demanded great dedication was understanding how the project would handle its context. Or rather, how the house should present itself, is located in the center of a small town [1] in the São Paulo Historic Valley, in the Serra da Bocaina region. It was clear beforehand that the relationship should not be established by mimicking the past crystallized in the houses and the cobbled streets that permeate the Praça da Igreja Matriz (Matriz Church Square). However, it was also clear that the house should somehow establish a link with the nostalgic atmosphere that hovers over the city since the end of the coffee cycle [2].

To understand the reverberation of the history incorporated into the project, it was important to carry out a closer examination beyond the usual visit to the intervention site. From the everyday life absorbed from observing the goings-on in the square, from visits to the São José movie theater [3] and the Pau D’alho plantation [4]and from engaging in conversation with neighbors, whose families have lived in the city for generations, was born the desire to establish a silent and subjective between the house and the city.

The second directive arose from a more pragmatic reality: the house should be feasible. Construction was tied to a lean budget (R$1,000.00/m²) and workers inexperienced in the coded reading of architectural drawings. But, above all, it should embrace an architecture capable of incorporating the many traditional knowledge guarded by local builders.

There was yet a third asset to be considered, unrelated to buildings and their techniques. Among the juxtaposed houses, without lateral and frontal setbacks, the lot was the only unbuilt land in the central area, offering only a green space visible from the sidewalk. The ornamental and fruit plants present there were cultivated by the client’s mother, an expert gardener when the land was used as the family’s backyard.

It is curious that, after so many years, a little soil management made plants from the client’s mother’s time spontaneously resurface, including yams, caladiums, ferns, and anthuriums. The manifestation of ancestrality present in the time extracts of this land — a vegetable and affective heritage — determined that this should be a house designed for a garden. The inversion of the usual logic, where construction thought precedes the landscape (a garden designed for a house), offered the project an opportunity to celebrate vegetation.

A journey of delight begins at the gate, placed along the pre-existing wall that establishes the street limit in continuity with the neighbors. The sinuous path takes the visitor through the plants, revealing, little by little, partial views of the house. At the end looms a stone staircase, which beckons guests to dive under the walkway that emerges into the void. Here, on the ground floor, the two built blocks frame an imposing mango tree.

In addition to the symbolic celebration represented by the mango tree, the non-built space also marks the project’s most significant action. Were it not for its existence, which divides the program into a social block and a private block, perhaps the simplicity of the floor plan would resemble a traditional rural home, typical of rural culture.

The empty space has also represented the desire to reconcile spatial times and their peculiar expressions in the ways to inhabit. If on one hand the walkways that delimit the space propose a non-traditional transit exposed to the elements, on the other the long concrete bench offers a reinterpretation of the contemplative activity characteristic of São Jose do Barreiro. However, the true pinnacle of the project is not in its built elements, but in the atmosphere revealed to those who sit there: the chiming of the church bell tower, the solidity of the nearby manors, the clay tile roofs, the rustic carpentry, The vivid colors of the garden in the foreground and the endless hills in the background.