Italian architect Renzo Piano’s studio has shared its plans to create three hospitals in the cities of Thessaloniki, Komotini and Sparta in Greece for the Stavros Niarchos Foundation.

All three hospitals are being developed to support existing healthcare in the country and will be unified by an ambition to provide patients and staff with a connection to the outside.

“One of the most important concepts for each of the SNF Health initiative Hospitals is its relationship with nature,” RPBW Architects said.

“In Sparta, as for the hospitals in Komotini and Thessaloniki, trees will be an important design feature defining the hospital, making it a special place within the immediate rural context.”

In the south of Greece, the General Hospital Of Sparta will replace an existing building that goes by the same name and is set to merge with another healthcare facility nearby.

Designed as a single three-story structure that appears to emerge from the treetops, it will encompass 22,436 square meters and measure 115 meters in length.

The three floors will contain inpatient and outpatient units, while below ground three basement levels will contain supporting functions for the hospital.

Completing the scheme will be a tree-filled park with play areas and private areas for patients, including “healing gardens” landscaped specifically people with sensory disabilities.

“Trees will be an important design feature defining the hospital, making it a special place within the immediate rural context,” said RPBW Architects.

“The idea is to create a hospital immersed in nature, fostering a peaceful and calming environment—not only for patients and their relatives, but also for doctors, nurses, and the rest of the staff. Nature plays a therapeutic role in this project. “

In the north of Greece, the University Pediatric Hospital Of Thessaloniki will take the form of an 80,345-square-meter campus.

Its design will provide a mix of pediatric and mental health services for children and adolescents and is hoped to help advance children’s care in Greece.

As its name suggests, the building will also contain education and research spaces to train medical staff and students based at Aristotle University of Thessaloniki.

Once complete, the main hospital and teaching facilities will be split across the site, forming two anchors for the campus. Together, the buildings will encompass 48,751 square metres. 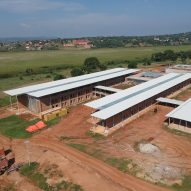 The buildings will be linked by two circulation spaces, one for the public and one for staff.

Inside the hospital, the treatment spaces will be designed to ensure parents or caregivers can support their children and engage with staff. For example, an extra bed in the hospital rooms will allow them to stay overnight.

“Spaces for parents and caregivers have been designed according to the need for proximity to and interaction with their child,” the studio explained.

“A special family space located at the entrance level is visually connected with the park and provides areas for children and their families to meet and talk with their doctors, to encourage dialogue and support for patients and families.”

Gardens will also form a key part of the campus, with a mix of green spaces and play areas for families but also for the staff. The interiors will be lined with large windows to ensure visual connections to these areas.

Close by will be the third scheme, the General Hospital Of Komotini, which will replace one of Greece’s oldest hospital – Sismanogleio Hospital of Komotini.

Similarly to the Thessaloniki hospital, the 30,200-square-meter hospital will occupy three stores above ground, while its basement will conceal all technical functions.

It will be enveloped by 70,000 square meters of sloped parkland, which will mean only two stories of the building will be visible from afar.

“The hospital building will appear lower, more domestic in scale, hovering at the same height as the tree canopies,” explained the studio.

Key elements of the design for this hospital include a mass timber superstructure, with materials including cross-laminated and glulam.

It will also feature a wood-clad facade and a canopy supporting photovoltaic panels that will provide renewable energy and solar shading for the building. According to RPBW, it will be all-electric too.

RPBW Architects was founded in 1981 by Pritzker Architecture Prize-winning architect Renzo Piano. Today the studio has offices in Genoa and Paris.

Its trio of Greek hospitals form its latest collaboration with SNF – a charity set up after the death of billionaire Greek shipping tycoon Stavros Niarchos – follwing the creation of the Stavros Niarchos Foundation Cultural Center in Athens, which sits on a huge artificial hill.

Other recent projects by RPBW Architects include the Academy Museum of Motion Pictures in Los Angeles and the replacement for a collapsed motorway bridge in Genoa.

The visuals are courtesy of RPBW Architects.