From 17 November 2022 to 27 February 2023, ‘Recycling Beauty’ conceived by Rem Koolhaas/OMAtakes over Fondazione Prada‘s Podium and Cisterna, as a narrative that unfurls through historical analysis, discovery, and imagination. The exhibitioncurated by Salvatore Settis with Anna Anguissola and Denise La Monica, is an unparalleled study dedicated to the reuse of Greek and Roman sculptures in post-antique contexts from the Middle Ages to the Baroque. designboom had the chance to visit the venue and talk to the renowned architect about his artistic approach and exhibition layout as the narrative unfolds. ‘The exhibition is about re-use (of elements of antiquity), and we decided to ‘recycle’ some of the material of previous exhibitions we did together for the Fondazione’, he says designboom (see more below).

The scenography in the Fondazione Prada’s premise invites visitors to engage with the artworks through a variety of themes. ‘These include the reuse of works and materials; the coexistence of different temporalities; the historical distance and narratives simultaneity; inspiration and reworking of ideas; the transition of meaning and dialogue between cultures; but also the historical and contemporary importance of recycling due to a shortage of resources, and the destruction, recovery, and use of materials, architectures, objects and iconographies for personal or political purposes, which is also common in our own world,’ explains the architect. Ancient Greco-Roman heritage becomes in Settis’ words, ‘a key that provides access to the multiplicity of cultures in the contemporary world.’

According to the architect, ‘Recycling Beauty’ is an invitation to consider the past as an unstable phenomenon in constant change and to understand how context and time have been relevant for artworks, objects, and collections in history. ‘We tried to avoid socles as we know them. The exhibition is about re-use (of elements of antiquity) and we decided to ‘recycle’ some of the material of previous exhibitions we did together for the Fondazione. As you can imagine there is a good archive of exhibition material. All the transparent parts are pieces that we can reuse to build new structures. We will use them again. We also wanted to show some of the extreme detailed protections — how artwork of this prestigious kind is kept in place and shipped. Some of the wooden parts and the elastic synthetic ‘feet’ are the lower parts of the boxes that are made for superior seismic protection. The configuration has a sophisticated, spontaneous and honest expression.’ Rem Koolhaas says designboom.

The scenography unfolds as a landscape of low-rise acrylic plinths, allowing for the displayed pieces to be perceived not as individual objects but as an ensemble. The cubicle-like structures add to the flow, fostering a closer examination with the presence of office chairs. We also planned a didactic landscape. We display historic analysis with informative texts and scientific captions, in a digestible way. Therefore we created cubicles, open on two sides, like office desks with chairs in front of them. Smaller works are displayed here and the chairs invite visitors to sit and see the many details from a short distance. In general, what we wanted to do was to invite everybody to more attention for the works, in a time of decreasing attention span. The cubicles are also used with horizontal surfaces at different heights, depending on the size of the objects to place and if it’s interesting to walk around them. Most often we wanted to offer a 360-degree view,’ he continues. 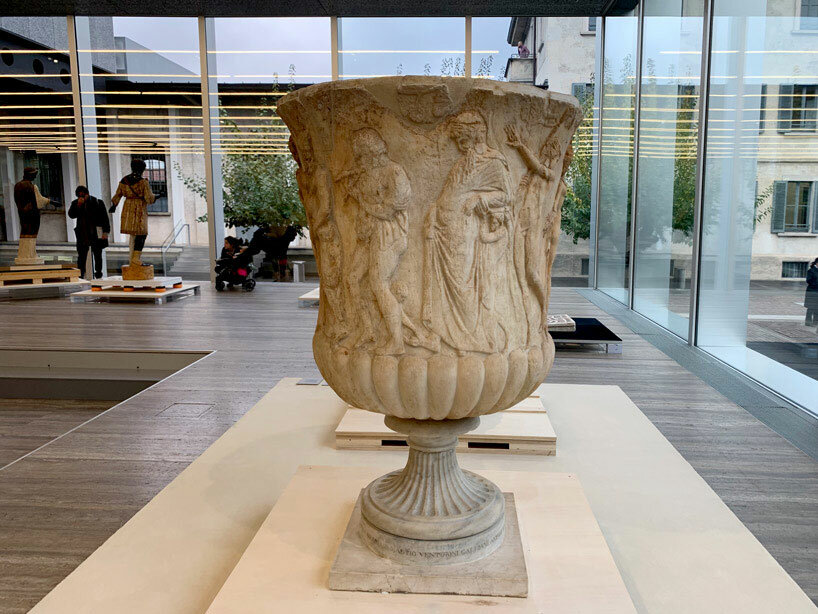 Visitors wander in the Cisterna’s venue and encounter the exhibits gradually, in a row of spaces that enable observation from different points of view, from the height of a balcony to the confined perspective of a room built inside one of the existing rooms. As aforementioned, parts of the design emerge from materials from previous exhibitions at Fondazione Prada, adding a spatial dimension to the theme of ‘Recycling Beauty.’‘The exhibitions of Salvatore Settis are based on a thesis; they are also polemics. The ‘designer’ has to create a space in which an intellectual argument can unfold. Antiquity is used to make arguments about the contemporary condition. ‘Serial Classic’ (Fondazione Prada’s opening exhibition in Spring 2015) gave a timely signal, the potential irrelevance of too much individuality in art – his new show suggests how Antiquity’s ‘extreme clarity’ enables it to return, recycled, in later periods’, mentions Rem Koolhaas.

‘For the first show, we needed to ‘equalize’ the sculptures – so that they could directly interact with each other and with the public without the dead-weight of their socks; for the new show – the reuse of elements of Antiquity by later cultures – we created a more didactic landscape to explore how an exhibition design can slow down, focus attention and manage expectations, from ‘spectacle’ to a more intimate experience, implied by the greater complexity of Settis’ second thesis. Apart from slowing down, we needed to also accommodate a huge space between the smallest almost microscopic item and the largest, the 11-meter-high reconstruction of the Colossus of Constantine. The multiplicity of the Foundation’s spaces helped the outcome, on the Podium we could establish an almost laboratory inviting extensive scrutiny, and in the three rooms of the Cisterna we installed unique conditions to accommodate the specific that Settis’ arguments required. The two-level observation that the Cisterna enables, could be exploited more than before – to see the Colossus directly in the face – a unique historical experience,’ he adds. 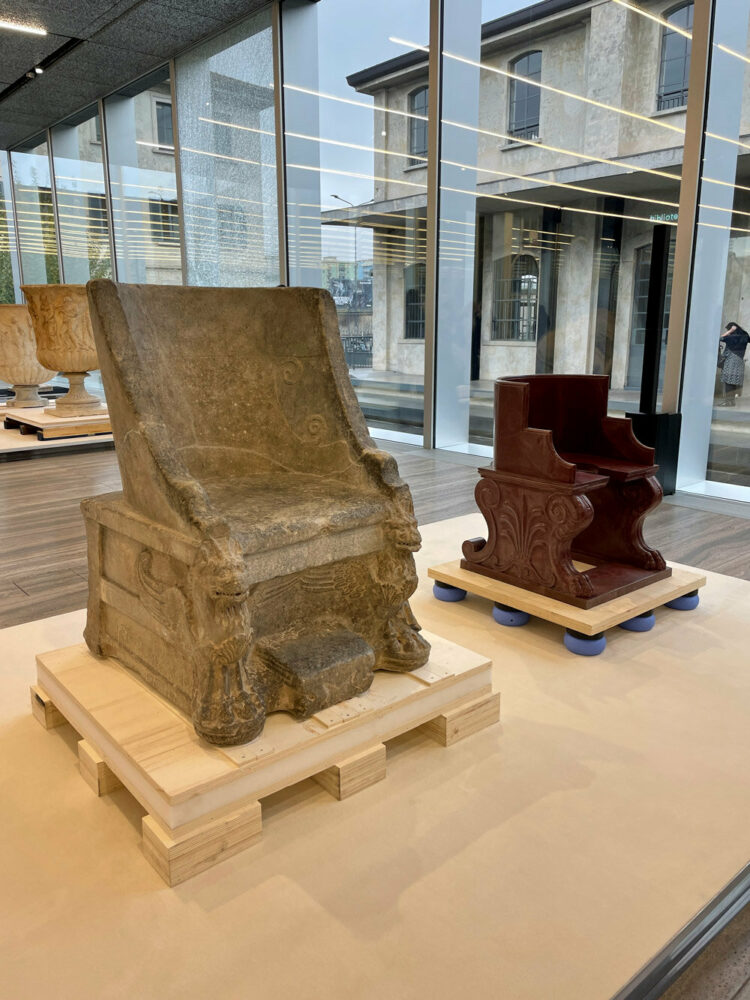 ‘Reuse entails the coexistence of different temporalities, in which historical distance and narrative and emotional simultaneity are continually intertwined. The ancient Roman marbles belong to the same cultural horizon as those who reuse them. Therefore appropriating them is felt to be natural. But the dimension of time evades the sequence of the calendar: it is unstable and can be manipulated and bent […]. Why take from ruins a relief, a vase, a capital? Why carry it somewhere else to insert it into a new one context? The answers explored in recent decades go in three complementary directions: reuse can have a value that is either memorial (aimed at the past), foundational (directed towards the present), or predictive (oriented towards the future),’ as Salvatore Settis explains.

‘Without documents it is often difficult to decide which of these intents prevailed from one case to the next; it is certainly possible that they were present simultaneously. […] The heart and spur of the act of reuse is often, or maybe always, ‘to insert the past into the future,’ as German historians say Reinhart Koselleck contends to foresee or determine its development. The new context absorbs what it reuses, but it must (and wants to) leave it recognizable even while (or rather, precisely because) it takes possession of it.