Art director and New York advertising icon George Lois has died at age 91. According to his son, photographer Luke Lois, George died ‘peacefully’ on Friday, November 18th, in his home in Manhattan. The Madison Avenue designer was perhaps best known for his bold and provocative Esquire Magazine covers created between 1962 to 1972 and advertising campaigns for Robert Kennedy, MTV, Tommy Hilfiger, Maypo and Pontiac, among others. He led the transition away from the Norman Rockwell-style magazine covers of the fifties which relied on painted and illustrated scenes, in favor of imagery which is less decorative yet far more impactful.

George LoisJob titles make it difficult to describe the breadth of work he had carried out over his illustrious career — while this career had spanned six decades, he continued working long after his official retirement in 2000. designboom met George to learn about his work and influences in 2014 — read the interview below!

designboom: As an image maker, what are some of the first images that made a big impact on you?

George Lois (GL): Movies definitely made a big impression on me growing up. I still remember clearly watching scenes from Fellini’s ‘La Dolce Vita,’ particularly one where a helicopter is lifting a sculpture of Christ over the city of Rome.

Hitchcock’s films have also stayed with me — I love the scene in North by Northwest where Cary Grant and Eva Marie Saint are walking on Mount Rushmore and you have this tremendous contrast in scale between the actors and the giant features of the presidents’ faces. It’s not that I saw those images and understood them on a technical level or analyzed them, but those kind of dramatic images deep into your DNA and your way of thinking when it comes to making your own images. 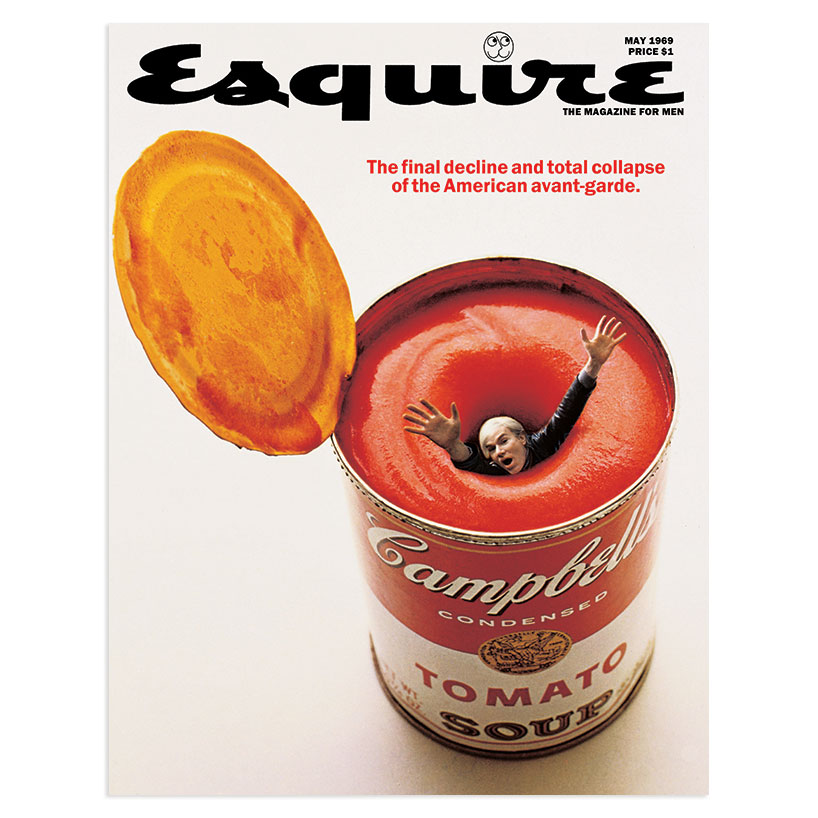 DB: Do you remember some of the first images you created?

GL: At high school we had a design class and the teacher — who was very much into the Bauhaus way of thought — asked us to design a composition using geometric shapes. One lesson we’d do circles, another week’s triangles, and so on. Anyway, one day she asked us to do something with rectangles and said it would be half of our grade for the semester. So off everyone went with their scissors cutting away creating things that looked like Malevich or Bayer.

But I just sat there motionless for an hour and thirty minutes. As the teacher was walking around, watching me do nothing I could see her getting furious — because she knew I was a good student. Anyway, she eventually said ‘times up everybody’ and began collecting the pieces. As she was about to take mine off the table I said ‘hold it!’ and signed my name in the bottom corner. I’d just given her a perfect 18×24″ rectangle.

It was from that time that I understood — when you are asked to come up with a creative solution you have to do something that surprises or shocks people. It was the simplest answer to the brief but also the most surprising. 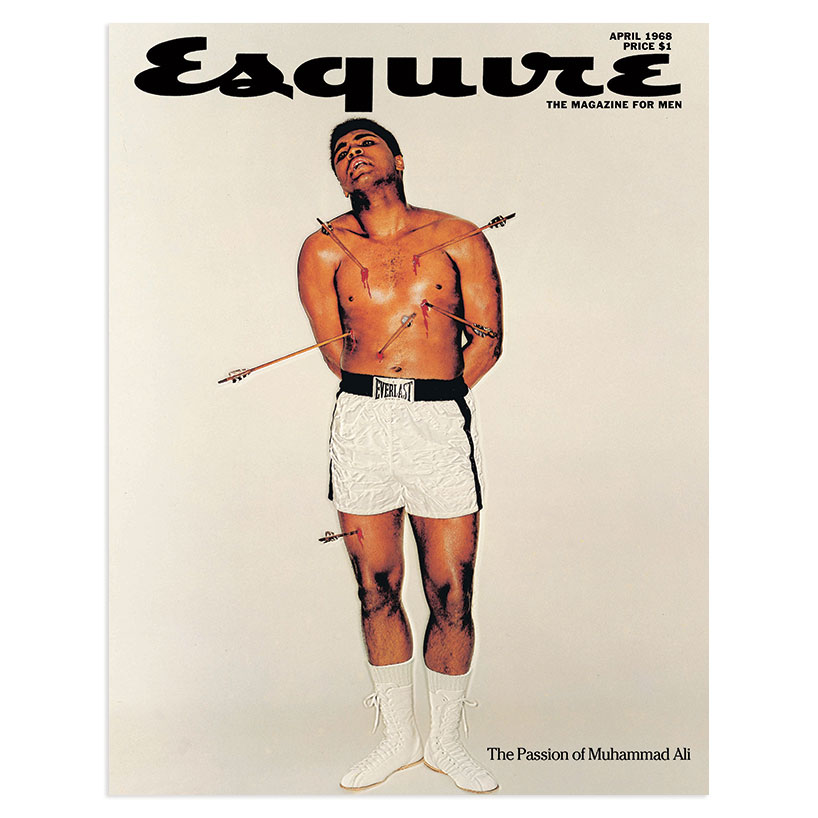 DB: Do you think that your ability to surprise is your strongest skill?

GL: Yes I think it is. When I create an image, I want people to take a step back awe when they see it for the first time. I want them to be taken back first by the strength of the image, then by the meaning of the content. This makes people understand what’s special about a product or how exciting and interesting a magazine is. Another one of my strongest skills is making something memorable. If something memorable it stays in consciousness and helps sales. 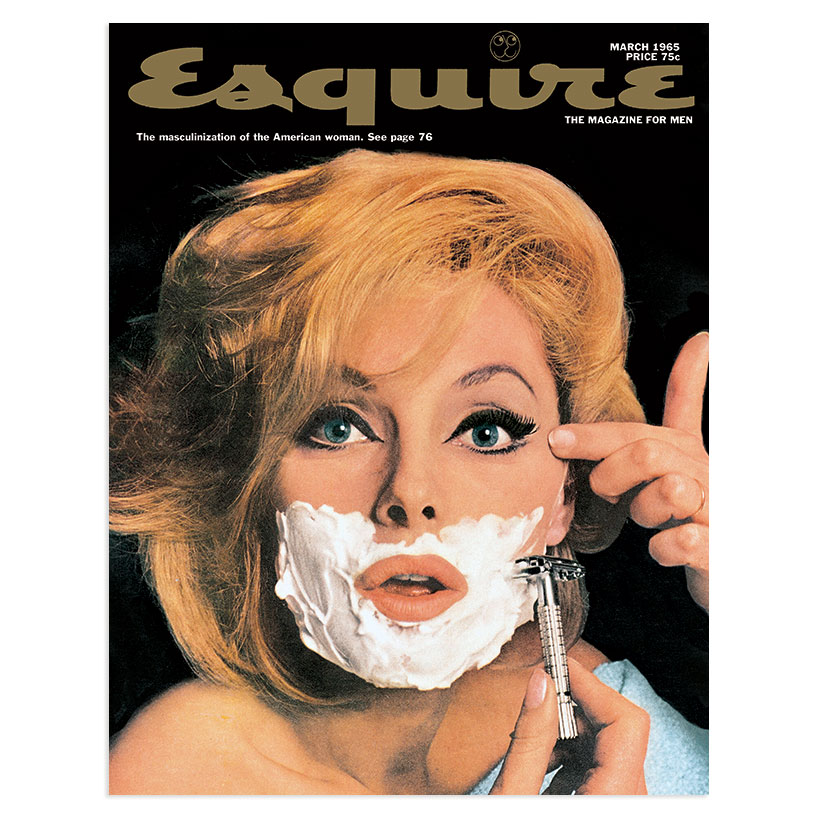 DB: your solutions are often bold, concise and iconic…

GL: All my concepts are very simple. Under-designed in the sense that I put the idea down and don’t design around it — there’s no decoration, no added colors. It’s as simple as Andy Warhol drowning in a giant can of soup. PERIOD.

I can explain the ideas behind my images very quickly and easily and you get it — and that’s what makes it work — people understand it immediately.

When it’s a great idea, one that’s memorable there’s a chance people will think about it for the next five, ten, twenty minutes, maybe, and that’s very valuable when your trying to sell things. Some people still remember the ads and magazine covers I came up with over forty years ago. 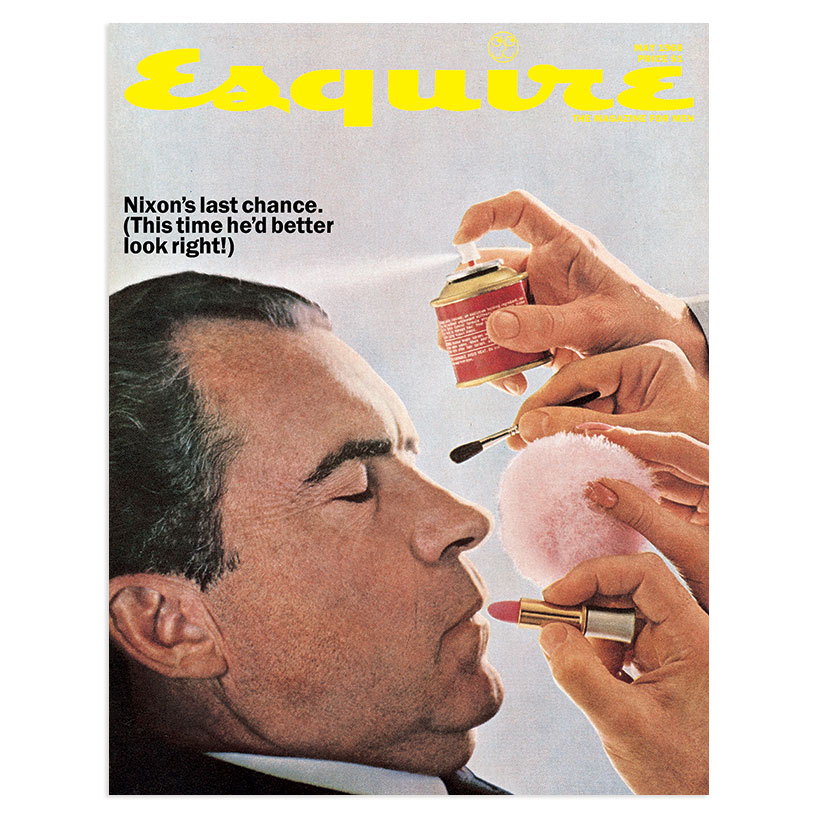 DB: Could you tell us a bit about your process, from receiving a brief to finalizing the idea?

GL: I always have a pencil in my hand. I’m always making notes and sketching and whenever I get an idea I think has something in it I put it down somehow.

Luckily I have very good concentration. Leave me alone for an hour or two with a problem and I’ll almost always come up with an interesting solution. If I can’t come up with something in that time then it’s because I don’t understand the problem.

I’ve done a lot of work and one reason for that is because I work fast. I know my job and that’s to come up with a surprising idea.

I’ve come across a lot of people in design and advertising — they don’t think ‘my job is to focus on this problem and come up with an idea that surprises people.’ No, after talking with the client they jump straight onto the computer and go ‘fishing for ideas.’ You’ll never come up with a great, original idea that way. Concentrate on the task at hand. 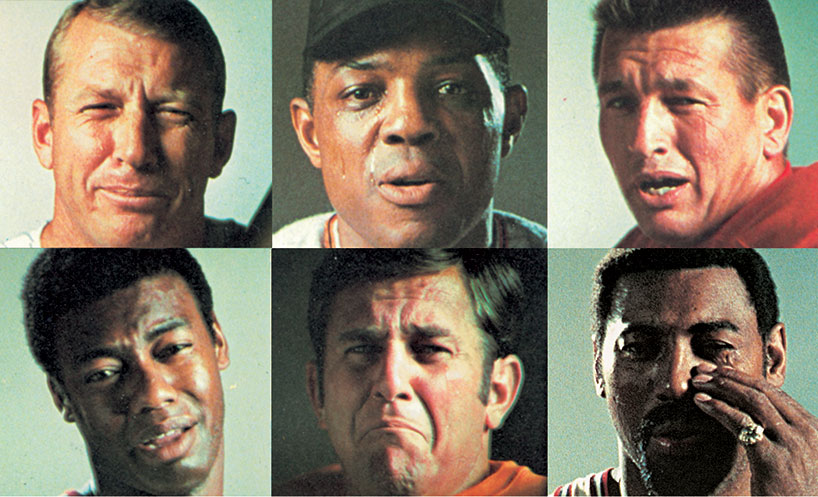 still from ‘I want my Maypo’ television commercial — watch it here
Famous athletes were seen crying for cereal in an ad to help the cereal ‘Maypo’ appeal to a wider audience.

DB: …So it’s a matter of constantly exercising your mind so you’re able to perform when you are asked to?

GL: Exactly. You need to have an interest in everything. And it’s not difficult, it’s fun, it’s life I don’t know any other way to be. You have to be always observing, constantly interested in culture, and not just high culture — watch movies, listen to music, read sports pages, go to events, meet people. To do what I do you have to not only understand culture but reflect it, and at times try to change and influence it. you have to know what’s going on. 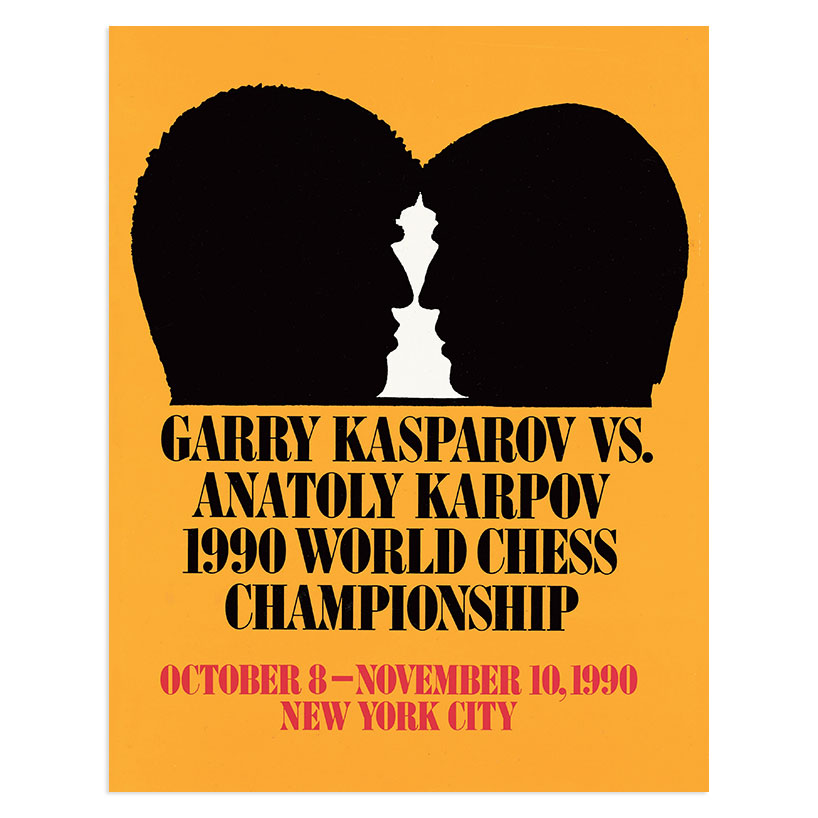 Kasparov vs Karpov — poster for a famous chess duel

DB: Do you think that market research often dilutes the strength of an idea or concept?

GL: Yes, 99% of the time it’s bullshit. I was looking at four months worth of market research with a client the other day and it gave me a headache. It had cost hundreds of thousands of dollars to carry out and most of the findings were simply common sense.

Within two hours of the client briefing me I’d understood what would help bring him more business — whereas another agency had taken four months and a lot of money to only tell him what his ‘real’ problem was. That’s not our job. Our job is to come up with ideas and answers.

Trust in common sense and your instincts and you’ll solve problems. Research can be useful of course, don’t get me wrong, but often it’s not when we are talking about advertising.

Here’s another thing that’s happening. People are now researching what people want to read so they know what content they should put in their magazine. To me that’s completely the wrong way to go about it. Just make a magazine that excites you! What do you want to read about? Then write about that and your friends will read it and other people will read it if it’s good. There’s no magic formula that comes from research. It just proves what we know most of the time.

A truly creative person, an intelligent person who understands culture can come up with the same answers in half an hour that a team of mediocre researchers or marketers wouldn’t think of in a million years. 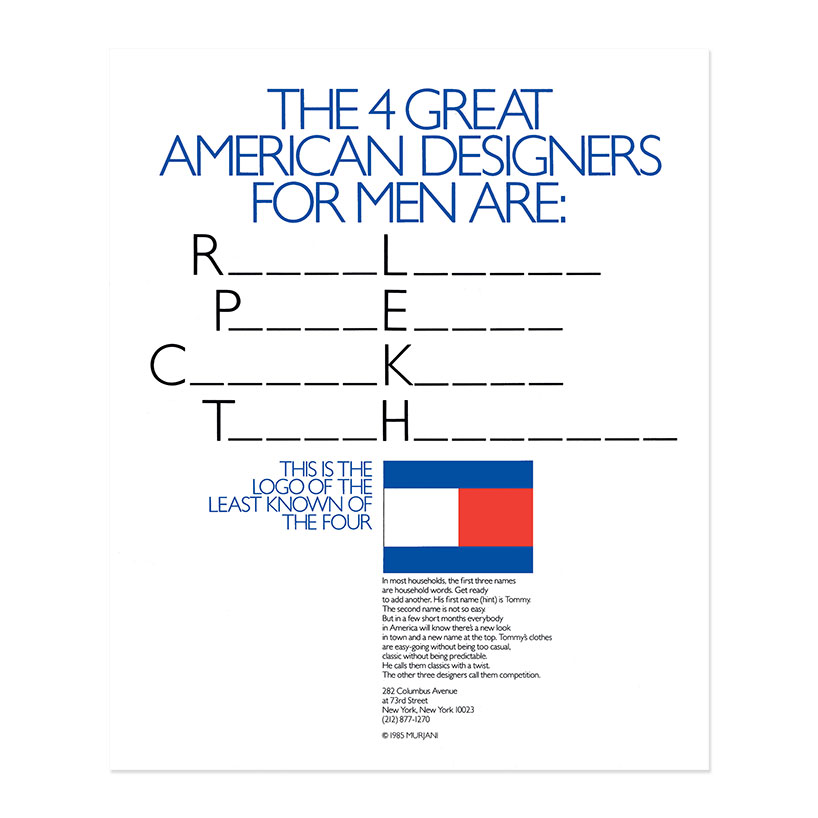 DB: What do you think is the single best representation of your work?

GL: There’s too much to choose from. I think a lot of my work has stood the test of time if you think of the Esquire covers and the television ads, but one that stands out to me in every way, for its originality and success would be a print ad I did for Tommy Hilfiger.

I worked with Tommy on the design of his store and the next step was to work on his advertising. But he had no money at the time. He told me his budget for the year and it was so low that I decided we’d have to spend it all on one ad. So, we spent one year’s budget on one ad and within days he was known all over America. He was on the Carson show the same month. By the end of the year he was a multi-millionaire, everyone knew who he was and every department store in America wanted him. 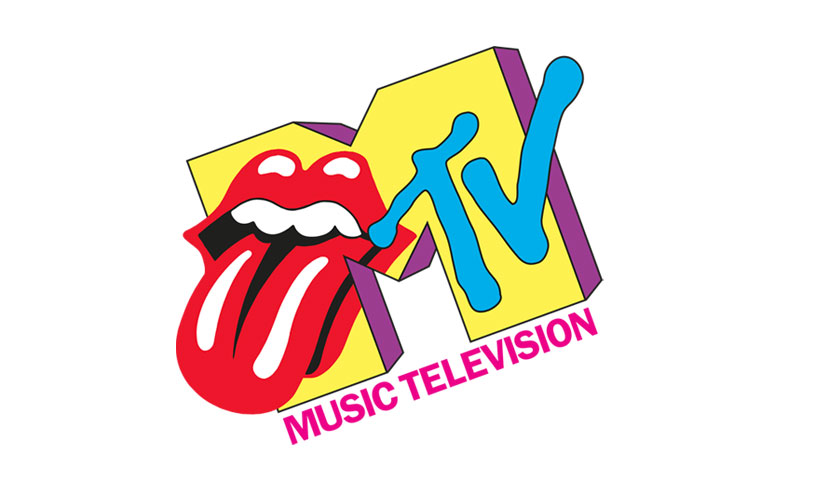 DB: Do you think designers and artists have a peak creative period in their output so to speak?

GL: I don’t think people get any better if they don’t know what they’re doing to begin with. Some people know what they’re doing and some don’t. I’ve written books on it — trying to explain and give advice. People’s technical skills might get better, they might execute an idea better sometimes than others but when we are talking about ideas and originality some people have it and some don’t.

Are you prepared to surprise and shock people? To make people feel uncomfortable? Provoke them? Most people aren’t — they just want to be part of something and advertising can appeal to people for all sorts of reasons but many don’t have a clue what they are doing because they don’t know how to create an image or a message. People are happy just to do what everyone else is doing.

Look at magazines today, most are boring. The covers are all the same and the layouts look like webpages when you can do so much more with print. It’s sad. It’s depressing! I see pages and pages of dense type, small photos and dense information for the most part. Very few designers are looking to surprise their audience with their pages — there’s nothing striking! Where’s the excitement? Throw some dynamite in there – let’s have fun!

DB: Under what circumstances do your refuse to work with a client?

GL: I’d never do any cigarette ads or anything for health insurance, for a conservative Republican. It’s not that the product has to be incredibly important, I mean I can get excited about advertising a new safety pin if I have to, but I have to believe in the product myself.

DB: What do you think about the current state of advertising?

GL: Well, there’s a lot of interesting ways to advertise today but a lot of the ideas are terrible and very few companies brand themselves well through advertising. They tell you how good they are and give you statistics but two minutes later you’ve forgotten the ad and never had any idea of ​​what it was about.

You can watch ten different car commercials in a row today and not know which one is for which brand because they’re all practically the same. The ads are not branded well enough and so you don’t even know who’s talking to you — they never tell you who they are.

A lot of ad agencies are fooling around and doing silly things that get noticed but don’t necessarily improve brand recognition or sales because people don’t know what they just saw. Advertising has become a big industry but a lot of people who are working in it don’t know what they are doing.

People should love your commercials. With good advertising a good product can become a great product.