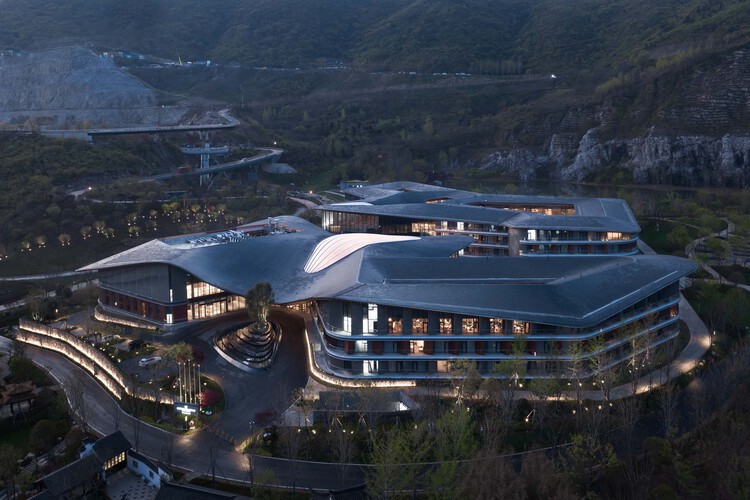 Text description provided by the architects. The dialogue between humanities and construction spans three years and builds up a period of random thoughts. It was a precious experience to continuously understand the landscape of the site and to integrate the design into the natural construction.

Building Volume integrated into the landscape. Jiangsu Horticultural Expo Park is located in the original abandoned mining area of ​​Tang Mountain. When you arrive at the site for the first time, it is full of relics. This useless place has become the best proposal for Expo Park. Ecological restoration is not only a slogan, but also a unique opportunity for architects to reinterpret the dialogue between nature and humanity in the post-humanistic era. During the site planning period of urban exhibition gardens, prof. Wei CHEN extracts the “remoteness” with three perspectives including a view at a high, low, and horizontal level in Linquan Gaozhi (Lofty Record of Forests and Streams) by GUO Xi in Song dynasty to create the whole garden, leading the design team to understand the site and inspire the conceptual design. Radisson Collection Resort, with a huge volume of nearly 35,000 square meters, is located on the south side of the pond, looking at the north slope cliff of the “Yang Mountain Monument”, while the site base is narrow. Meanwhile, the site is low in the north and high in the south, and the west is adjacent to the urban exhibition park, so the landscape around is diverse. The variety of views and the site alignment formed a lot of temptations for creation, which was very difficult to choose. Under the constraints of the site, it is pretty difficult not only can it not stand out from the crowd, but also needs to form an independent personality and stand in the landscape garden.

The project introduced GIS visualization technology to analyze and interpret the relationship between the cliff wall, the pool scene, and the site trend. By analyzing the tangential and normal vectors of the three core elements of the site: slope, height, and direction, a composite vector field is formed, and the trajectory of the particles is further obtained by the particle clustering intelligence algorithm. The clustered particles generate geometric paths that are strongly correlated with the texture of the base under the influence of each parameter constraint, generating geometric relationships that are consistent with the growth form of the hotel fading in the environment and integrating into the form of the landscape garden , which enables the technology to find the shape of the digital building in the landscape garden. The preliminary straight surface of the roof is obtained by reconstructing the orbital lines of the characteristic particle points and by drawing. The geometry of the surface is fitted by the “system of lifting and folding” in the traditional sloped roofs, which is steepened from the bottom to the top with a concave curved roof, making it structurally reasonable and echoing the traditional Chinese sloped roof construction method .

Topography folds into the garden view. The overall volume of the Radisson Hotel is based on the geometric language of the earth, and the 15-meter height difference of the site creates a cascading and coiled geomorphic landscape, which is generated by the topography, dividing the site into two program areas, north , and south. The design sets five kinds of height difference changes, with a circular tour path as a clue, connecting five elements of the guest room units, reception datang, public recreation, dining and entertainment, and landscape tour garden. The building is a self-contained system, which is in a natural dialogue with the texture of the cliff and echoes the surrounding wilderness. The multi-directional space brings a dichotomous balance between people and nature. Meanwhile, in addition to the complex relationship between the site and the cliffs, pools, and ponds, the water system, and mountain and lake scenery, there is a novel landscape composed of many small and micro gardens in the Urban Exhibition Park of the Expo Park. The linear folding interface redefines the boundaries of the urban garden, giving the Radisson Hotel a hidden and rigid landscape layout strategy of “great completion is lacking, great lack is becoming”. The slope of the hotel and the folded boundary form a staggered layer, which together with the trees in the garden reflect each other, and achieve dialogue and harmony between architecture and the environment.

Corridor overhung on the suspension. The entrance of the Radisson Hotel is set on a high platform with a 3M height difference south of Nantong Garden in the urban exhibition park, which is actually the background. When standing on the road to the east of the hotel, even though the road is winding, the lush foliage of the entrance tree is not hidden for a moment but is instead highlighted beyond the building volume, creating a sense of asymmetrical order and the moody painting of “a tree becomes a forest” at the entrance. The north facade of the Radisson Hotel is in gray tones, with a roof of gray tiles and a long scroll of gray robotic bricks, reflecting the lush style of the Expo Park, with a balance between soft and rigid, and looking at each other. The entrance canopy is emphasized as a reinforcement of the sense of order, expecting the entrance to be “remote” while still meeting the needs of visitors’ vehicles to escape from the rain, requiring a smooth corridor space and the idea of ​​architectural-structural integration , finally unified in the Kangaroo dynamic simulation of the conceptual birth form of the protruding corridor. However, the optimal solution in terms of morphology was difficult to achieve due to the structural properties of the wood structure of the roof. Finally, through the cooperation of the structural engineers, a column-less gable structure with a span of 28m and an average depth of 8m was completed by using two steel cables after balancing the shape of the roof on top of the pressure stack. The intentionally reserved gutterless eaves at the entrance form a waterfall falling on rainy days due to the recessed form, creating a natural and elegant scene interacting with the lone tree and pond at the entrance.

A single column blooms in the lobby. Entering the lobby of Radisson Hotel, the project intends to continue the sense of “long-distance” traversal, wishing to guide people at the end of the lobby through the floor-to-ceiling windows to take in the focal point of the Expo Park , the “Jingyang Tower”. Meanwhile, the general plan adapts and extends the winding interface, and draws on the landscape so that it can also take in the meandering road, water system, deep valley, hidden mountain, and lake. The lobby space echoes the concept of “one tree becomes a forest” at the entrance, and through the coupling calculation of structural mechanics and morphology, the double curved roof space intention of “one column blooms” of nearly 2000 square meters is realized. The topological continuity concept integrates the column and beam structure of the lobby, and the concept of a “blossoming column” is developed by the topological configuration of one point four. The overall roof force is integrated through the integrated design of the curved beam and column to achieve the goal of integrating “shape and force” to find the shape. The design was simulated by kangaroo dynamics to find the shape of the “blossoming column”, the main force structure is composed of steel structure, and the secondary curved beam and column system between the main structure is intervened by wood structure. The final overall structure was optimized by nodes to achieve the integration of form and force, light and space. The “blossoming column” is not only a structural body but also an important source of light for the core space of the interior, naturally extending from the roof to the ground, with sunlight spilling in through the gaps in the wooden beams. Sunlight pours in through the gaps between the wooden beams, extending the sense of “openness” from the entrance eaves to the interior atrium.

Landscape reproduced in brick masonry. In addition to the design research of structural performance building biomorphism, Radisson Hotel is still committed to the exploration and practice of building robotic construction mode for performative construction, and to recreating the local cultural memory through technology. The brick partition wall in the guest room is controlled by image interference technology to control the rotation angle of the bricks, which produces concave and convex light and shadow and brick jaggedness to reshape the image information with abstract digital geometry, and the abstracted translated wall shows the digital expression of “Landscape of Zijin”, reproducing the double picture of nature and tourism. The image translation line of sight was trained with the help of artificial intelligence (AI) models. More than 500 images of the local landscape were input, and the structure and brushwork of the Jinling landscape were stylistically migrated using Generative Adversarial Network (GAN) in deep learning, and the digital landscape that fit the landscape of the cliff face of the site were generated through iterations. The landscape is generated by iterative generation. Then, with the help of grayscale discrete geometry extraction, the grayscale parameters are converted into the rotation angle of the bricks at the time of construction. The key intentions and elements in the landscape are further translated into architectural architectural abstraction to obtain the final image of the façade and the digital construction effect.

In the project, the interaction between machines and humans in terms of emotion, thinking, memory, and even creative intent were achieved, which is a milestone in how to connect virtual design and material intelligence in this post-humanistic era. The practice, of presenting traditional memories with the technology of the times, and breaking the shackles and conventions with the new spirit of the post-humanistic era, is perhaps the most unforgettable experience brought by the project.