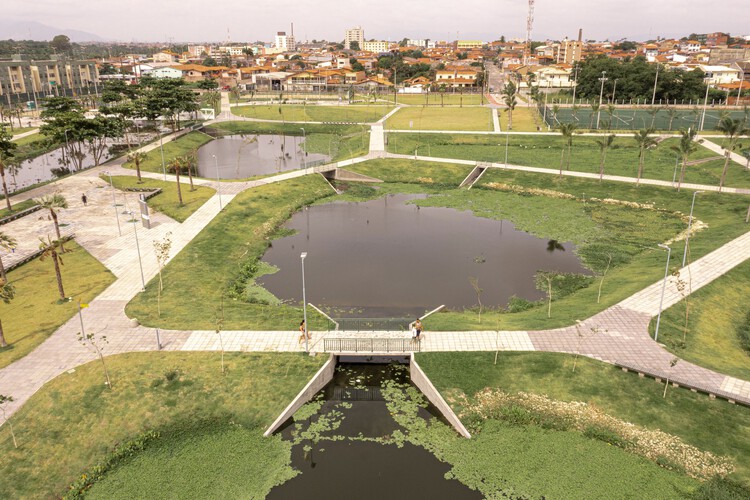 Text description provided by the architects. In the early hours of the morning, the movement begins. Regulars in gym clothes choose to start the day by practicing some kind of physical activity. Walking, running, outdoor gym, biking, soccer, and volleyball are just some of the options available. All this takes place on the shores of nine interconnected lagoons, the wetlands. This is just a brief summary of what can be found in the first stage of the Parque Rachel de Queiroz project.

With 10 km in length and about 203 hectares, when completed the park will be the second largest in Fortaleza/CE. Its great extension is the main reason for the division of the area into 19 sections, six of which have already been executed. The project adopted the design concept of a linear park, using the existing road system as a connection between the green areas that cut directly through eight neighborhoods in the west area of ​​the city.

Recently opened, the sixth section of the park was designed to recover a degraded area that for many years was a cause of concern for the local population. The site, the largest project area available for intervention, was previously a vacant lot taken over by irregular garbage dumps and clandestine sewage. This situation contributed to aggravating the pollution of the Riacho Cachoeirinha, a water resource that cuts through the lot and structures the largest area of ​​the park. In addition, it caused frequent flooding due to the overload in the rainwater drainage system, a direct result of the region’s intense densification process and the consequent reduction of permeable areas in its surroundings.

Occupying one of the city’s flooded preservation areas, the Parque Rachel de Queiroz project adopted the drainage system as a structural element. The wetland technique was used to improve the water quality of the Riacho Cachoeirinha, as well as to create a flood dampening system. After intensive hydrological studies, nine interconnected ponds were proposed to perform a natural water filtering process through decanting and phytoremediation. This process is conducted by microorganisms fixed both on the surface of the soil and on the roots of aquatic plants in the ponds.

In other words, in addition to their landscape potential, wetlands are a fundamental strategy for the environmental recovery of the area, without excluding the uses required by the local community. Furthermore, the implementation of green areas, which involved earthworks and the planting of nearly 600 trees, was crucial for promoting the development of the local fauna and flora. After the opening of this section of the park, visitors have become used to seeing different species of the native ecosystem in the midst of the urban landscape.

The paths between ponds lead visitors to areas of permanence structured around various cultural, sports and leisure facilities. An amphitheater, a dog park, multi-sport courts, playgrounds, a reading space, and an outdoor gym are just some of the spaces available. A bidirectional track that surrounds the entire perimeter of the park guarantees a safe and suitable space for walking, running, and cycling. Since the beginning of the project, a diversity of uses was proposed to include and encourage spatial appropriation by the local population, through an understanding that the full use of the area is a fundamental component for environmental sustainability, preventing it from turning back into a place used for the clandestine deposit of garbage, rubbish or sewage.

Since the park occupies an extensive area, the connection between spaces was an essential aspect of its full use. With that in mind, two metallic walkways crossing the Riacho Cachoeirinha were proposed, so the creek would not become a physical barrier. Made of steel structure and concrete flooring, the walkways guarantee easy access, especially for visitors arriving via Rua Licurgo Montenegro.

The urban furniture project was based on two principles: sustainability and durability. The playground toys, PET space, and arbors were made of treated eucalyptus wood. The benches have biosynthetic wood seats on a concrete structure.

The visual identity of the park was also part of the project developed by Architectus S/S, requalifying the public space on different levels. The park logo highlights the wetlands as the main design element, while the signs and totems aim not only to guide but also to educate and inform the park users.

It is also important to understand the spatial context in which the project was implemented: the west area of ​​Fortaleza is occupied by neighborhoods with high population growth in recent years. Despite presenting large open areas, this region lacked quality public spaces until the opening of the Parque Rachel de Queiroz. All these factors contributed to the rapid appropriation of the park by the surrounding community, with a boost in both formal and informal trade in the region.

A few months after the park’s opening, it is already difficult to remember the previous configuration of the area, with its many urban and environmental problems. It was a fairly quick transformation into a bustling, lively, pulsating public space. Urbanity is applied in the best sense of the word.