Queer Spaces: Why Are They Important in Architecture and the Public Realm?

The queer crowd has always been present, finding ways to exist, gather, and celebrate. Although their visibility hasn’t always been highlighted throughout history due to the consciousness of having to submit to heteronormative and strict mass normality in the past, doesn’t mean they previously didn’t have their own spaces to call their own. Queer spaces, past and present, have been categorized as strong, vibrant, vigorous, and worthy of occupying their own place in history, filling in as safe places for identifying individuals, places of social gathering, entertainment, and even offering community housing; Therefore, there will always be a need for queer spaces. 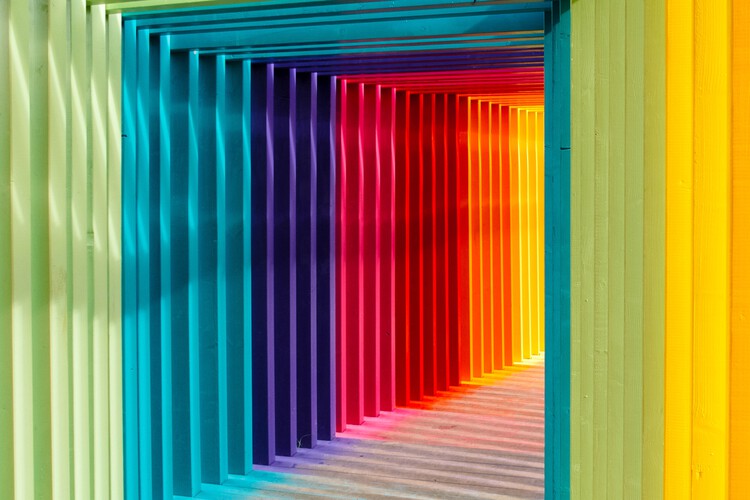 Despite social advancements and growing acceptance for queer communities in most recent years, even in the 21st century, some may still find it a struggle to accept a narrative that isn’t cis-gendered and heterosexual, resulting in disagreement, social exclusion, and communal violence. Our present-day, however, more than ever is illuminating the necessity for members of the LBGTQIA+ to be given spaces they can reclaim and unapologetically exist beyond closed doors, especially in a built environment primarily dominated by gender-driven design. Christopher Reed of Imminent Domain: Queer Space in the Built Environment (1996), states that “queer space exists potentially everywhere in the public realm.”

In this article, we aim to reflect on existing queer spaces, celebrate their triumphs, and consider how we can ensure that the future of public space and architecture always prioritizes safety, hospitality, and inclusion for all.

Designing around Debate: The Gender-Neutral Bathroom

First things first, many of you may be wondering what a queer space is. A queer space can be simply put as a space or strategy that intrinsically connects or ties in architecture with a person’s sexuality and gender identity. Queer spaces are designed with the intention for one’s body to be, defining the need to iterate one’s true identity, sexuality, and need to connect, whether that is on a physical level or through the prospect of the community.

When we think about queer space, perhaps we may first be drawn to the architectural metaphors long intertwined with non-heterosexual identity: the closet and the washroom. The phrase “coming out of the closet” has been used extensively since the 1960s to describe a queer individual explicitly making their identity and preferences known.

It was the architectural construct and idea of ​​the closet that was akin to one’s deepest desires, wishes, and the clothes they wore when in the company of their friends. The notion of ‘being in the closet’ was one that meant privacy and safety, shielded from the public, but as we continually progress with societal advancements, the closet is slowly becoming not one of the only places where queer individuals can experience safety and freedom .

With to promote gender inclusivity within public spaces, the implementation of gender-negative washrooms has become the intention prevalent. The modern-day gender-neutral bathroom is simply a public toilet that is accessible and designed for the use of any gender group. Such designs have been successful in maintaining the privacy and safety of the user, helping to ease the discomfort and risk of harm that comes with being met with the decision to use either the men’s or women’s bathroom for transgender or non-binary individuals.

Beyond the private-public spaces of the washroom are queer spaces for entertainment and celebration, namely, nightclubs, bars, and dance floors. Within these spaces, members of the LGBTQIA+ have also found a sense of community and belonging. Places of nightlife for queer individuals have facilitated the budding start of romantic relationships, the gathering of places, and the ’round table’ for political discussions. A handful of these spaces used to heavily symbolize freedom and safety but have frequently met with incidents involving uprisings, riots, and gun violence.

As so many of these queer spaces within nightlife’s architects, communities, contexts, and contributions to the built environment are missing from histories of architecture, some of these iconic queer spaces have been lost to history books, yet their impact on the community remains. Although some of the more recognizable names for nightclubs and bars are no longer in operation, new and existing spaces for nightlife amongst metropolises and the urban landscape are still amongst us and thriving.

Furthermore, queer spaces being demonstrated in the form of community housing remain all the more in demand, owing to the lack of social acceptance within families and neighborhoods, as well as to the scope of individuals being subjected to exclusion and violence. The LGBT Youth Commission (2016) undertook peer research and review of existing research by the Albert Kennedy Trust, finding that: as many as 24% of young people are LGBT, 69% of homeless LGBT young people had experienced violence, abuse, or rejection from the family home, and 77% state that their LGBT identity was a causal factor in them becoming homeless. With this research in mind, access to adequate housing for queer individuals is still a pressing issue.

Leong Leong and Killefer Flammang Architects’ LGBT Center in Los Angeles is a new typology for community-based urban development that includes diverse social and affordable housing programs. The porous, pedestrian-oriented urban campus features a public plaza and a series of courtyards that unify various social services as well as cultural and institutional programs. The result is a new, integrated platform for living as an intergenerational LGBTQIA+ community.

Although it may appear that the housing focus is on queer youth, there is also a necessity for housing for queer elders. Research reports that up to 53% of LGBTQ+ experience social isolation. In December 2019, another queer-friendly seniors facility opened its door. Dubbed Stonewall House as a nod to the famous Stonewall Inn, the 17-story, 1240,000 square foot mixed-use structure designed by Marvel Architects is the largest LGBT-welcoming elder housing development in the country.

These spaces are paramount in offering environments for building meaningful communities at the convergence of queerness and shifting modes of domestic life, and these are just a few examples highlighting queer-positive spaces and inclusivity within their respective design. Designers should keep it of uttermost value to always consult with marginalized communities throughout the planning and design of architecture and public space. Pippa Catterall of the University of Westminster says, “We have to move beyond the idea of ​​designing public space in a way in which they don’t think about the diversity of the users, or how people are going to be possibly targeted in those public spaces.”

Adam Nathaniel Furman, co-author of Queer Spaces: An Atlas of LGBTQIA+ Places and Stories states, “Growing up queer means experiencing the destabilizing absence of a broad and accessible queer history, most notably, in our case, in relation to spatial design. ” It is of utmost importance that there is a spotlight on the community of contributors who bring new perspectives to the field of architecture and share stories of spaces that challenge cis-heteronormative morals, sheltering lives that seek to live their own truths. Christopher Reed goes on to suggest, “Fundamentally, queer space is space in the process of, literally, taking place, of claiming territory.”

As we continue to work through our present day with the knowledge of the power queer spaces hold and their importance in society, the public realm, and the greater built environment, we can stand in hope that this information will continually open up and broaden the horizons of architects and designers who are not queer. However, in the case, you too are queer-identifying, the acknowledgment that you exist shall encourage you to take up more space, be prouder, and produce work that is totally and unapologetically queer, newly mindful of the glorious lineage your work will sit within.