Public Spaces and Urban Areas: 12 Squares Viewed from Above

Some of the most characteristic features of city squares are related to the presence of people in the space and the purposes they are given, such as places for socializing, sports, and demonstrations. These different uses, often not foreseen in the project, are closely associated with the ground level, where people can walk around and experience the space. Viewed from an aerial perspective, on the other hand, squares can reveal other aspects related to their architectural design and their placement in the urban context. 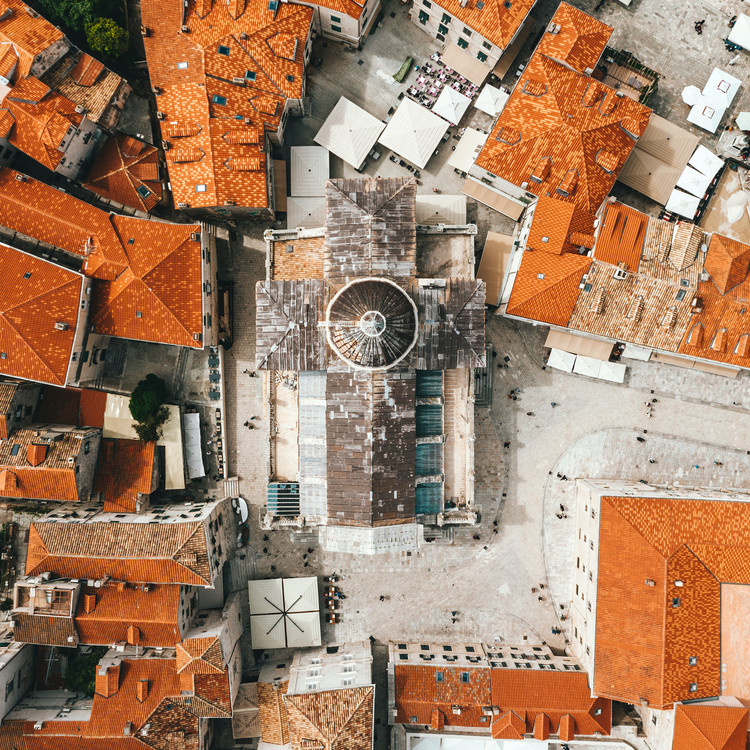 The arrangement of public spaces throughout the city, the organization of the streets, and the empty/full relationship are some of the aspects that become more visible as we move away and are able to view more elements. Using aerial photographs one can perceive, for example, how the shape of a square can determine the urban layout in some cities, while in others, their presence can disrupt the order and rhythm of the grid.

In yet another collaboration with the Daily Overview, we have gathered below a series of images of squares viewed from an aerial perspective. Check it out:

After Avola was destroyed by an earthquake in 1693, the city was reconstructed in a new location using a geometric, hexagonal plan inspired by Renaissance architecture. The regular orthogonal plan features two main roads that intersect forming a cross that determines four neighborhoods and a central square.

Like many squares with regular geometric plans, the Plaza del Ejecutivo in Mexico City is located in the center of radially arranged streets. The 16 streets that stretch out from the plaza compose the Colonia Federalwith a layout that stands out from other areas of the city.

The Two Towers of Bologna, the Asinelli Tower and the Garisenda Tower, are located in the Piazza di Porta Ravegnana. The square has undergone many transformations over the centuries, including the construction of roads departing from this point towards the many “gates” of the city between the 19th and 20th centuries.

Located in the Eixample district, the diamond-shaped Plaça del Doctor Letamendi is intersected by Carrer d’Aragó, a major thoroughfare in Barcelona. The distinctive chamfered corners of buildings and streets in Barcelona’s city blocks are receded even further to give way to the square and the streets around it.

The whole network of streets and lots found in the city of Grammichele, Sicily, originates in the Piazza Carlo Maria Carafa. The streets parting from the sides of the hexagon-shaped square also cross six other squares located in the surroundings of the central square. The city was built in 1693 after the destruction of the old town of Occialà by an earthquake.

AT&T Plaza is a public space in Millenium Park, Chicago, known for hosting the Cloud Gate, nicknamed The Bean. The sculpture created by Sir Anish Kapoor has become one of Chicago’s most visited and photographed tourist attractions, which makes the square a very busy area, crowded with tourists and city residents every day.

Plaça de Tetuan is located at the intersection of two major avenues in Eixample and its circular design makes the surrounding residential blocks adopt a kind of fan shape, a very unique arrangement compared to the typical residential blocks of Barcelona.

Piazza San Pietro in Vatican City is one of the most popular and visited squares in the world. Designed by Gian Lorenzo Bernini and built between 1656 and 1667, the square is located directly in front of St. Peter’s Basilica and is surrounded by massive Doric colonnades containing the statues of 140 saints.

Located in the old town, the Assumption Cathedral, built between the 17th and 18th centuries, is surrounded by a public space where no cars are allowed, as is the entire old town area. Thus, the narrow streets leading to this spot find a free and open area that allows multiple uses.

The city of Palmanova was built in the 16th century (having undergone concentric expansions during the 17th and 19th centuries) for military purposes and still preserves the fortifications in the shape of a nine-pointed star. Piazza Grandelocated in the center of the city, is shaped like a hexagon and has six roads that lead to each one of its sides.

The square where Duomo di Milano is located has an overall area of ​​17,000 m2 and marks the center of the capital of Lombardy. Surrounded by landmarks like the Galleria Vittorio Emanuele and the Palazzo Reale, this place is often crowded with tourists as well as the city’s inhabitants.

The square is located in the Palomeras Bajas neighborhood in Madrid, characterized by a strict grid pattern and apartment blocks with communal courtyards. The square occupies the area of ​​one block and is quite shady due to the presence of trees.