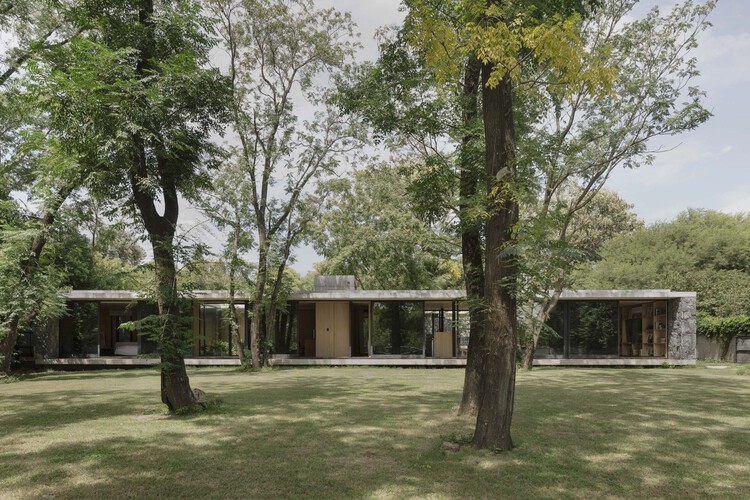 Text description provided by the architects. Casa Paraíso responds to a private commission for an individual home located in the Quinta Los Nores neighborhood, Córdoba, Argentina. The project begins at the beginning of 2019 with a visit to the lot, where we were particularly surprised by the enormous amount of large existing vegetation on the lot. The vegetation was located mostly on the final part of the lot, in close relation to the river La Cañada, and without any order or criteria, that is, it formed an irregular, moving fluid landscape. The first reaction was to walk there, stay under that blanket of vegetation, and perceive and feel what it conveyed. It was there that the concept of living under this mantle arose, locating the house away from the street, bringing it closer to the river, and enjoying living under this very particular and unique microclimate.

Insertion/location. The house is located on an irregular lot of 3600 m2, facing North-South (North towards the river, South towards the street). Regarding this, within the multiple possibilities of implantation, two possible ones were addressed: the vegetation as the background and curtain of the house, or that of living below the vegetation, rescuing that particular microclimate that is generated by being below those large canopies. In relation to this, it was decided to develop the premise of living under that natural forest of large trees and following the impulse of that first visit to the site. In this way, the house is located occupying the total permitted length of the lot (respecting the meters regulations for a distance of 3 from the dividing walls on each side). It opens in its entirety with large glass carpentry from end to end in relation to this enclosed garden below and to the limit of the existing vegetation. In relation to the south, the house is closed with a large perimeter wall that copies the irregular shape of the location of the vegetation, thus generating a close relationship with a patio for private use, which is approached with a small ramp that copies the inclination of the natural soil until reaching a large reinforced concrete pergola, which runs from end to end of the house, as a transition between interior and exterior.

A Large Concrete Deck. Following the concept of living under a large roof that allows the function to adjust over time to the different requirements and uses, the idea was to locate a large slab of 27 meters by 8 meters which rest on 10 circular metal columns of 140 mm, which is complemented by another smaller surface from a large concrete pergola, which works at the same time as a bellows, as a transition space between inside and outside.

Under this cover, a large continuous and unlimited space develops. With the premise of breaking the limits within the dwelling, it was decided to limit the changes of uses within the spaces, that is to say, that the hard cores such as kitchen, laundry room, and bathrooms, function as large blocks of services that at the same time fulfills the function of limiting the spaces inside. In this way, the flexibility that is perceived in the space is of exquisite dynamics in which various functions and uses are combined in a large container space without one interrupting the other. Where at the same time, all the spaces have a constant connection with the exterior landscape, thus diluting the limits between inside and outside and achieving a spatial continuity that extends the uses of the house.

An Enabling Wall. The large concrete cover is linked and anchored to the ground from a large continuous stone wall that takes the slopes of the lot itself, thus reflecting that the ideas arise and refer to what the context offers us. In this particular case, one of the sides of the lot has an inclination, therefore, the wall leans on it, to later allow itself to copy the lines that nature itself marks, and include the existing trees within the house. This is why the wall extends outside the house itself and enables the formation of a patio, which recreates a landscape for contemplative, private use. Which, at the same time, houses the existing vegetation and the circular staircase that connects the earth and the sky. At the same time, this enabling wall acquires the capacity to house programs in itself. In this way, the wall goes from being an element that separates, to being an element that contains and has a thickness. That is why, in different passages of the house, the wall acquires the ability to be the element that frames the entrance, to later be a library, or a storage room, a barbecue, etc.

Technique and Material. In relation to these points, the construction is consistent with the resulting space. In this way, it was sought that the technique would allow us to achieve a large continuous space, without rigid limits, on the contrary, flexible ones. In other words, the large concrete roof is supported by an independent structure made up of circular metal columns, managing to free the different enclosures from a dry construction, which enables the adaptability of the house in the future.

On the other hand, in relation to its materiality, the project is contextualized by using local materials, enhancing and revaluing those traditional construction materials and processes of Cordoban architecture, such as stone walls, which is an element used with great frequency to delimit areas, generating limits and border. In this case, that limit between the public and the private is worked from these same elements, reinterpreted for domestic use. On the other hand, the relationship between technique and material is emphasized in the use of reinforced concrete, taking care of the modulations of its phenolics, the constructive resolutions to achieve different types of encounters such as the encounter between the house and the ground, or the house and the sky. In both cases, inverted beams that are formed at the same time as the slabs to thus guarantee the construction of the same horizontal plane, both on the ground and on the roof.