“Our Projects Lead to Discoveries”: In Conversation with Oleg Drozdov

Earlier this year the unprovoked barbaric Russian invasion of independent Ukraine forced millions of people to flee their cities and the country in search of safety. I talked to one of Ukraine’s top architects, Oleg Drozdov, who was forced to relocate his practice and architecture school he co-founded in Kharkiv, to Lviv, 1,000 kilometers to the west, next to the Polish border. His staff and professors — many of them assume both roles — resumed their work just weeks after the war broke out. 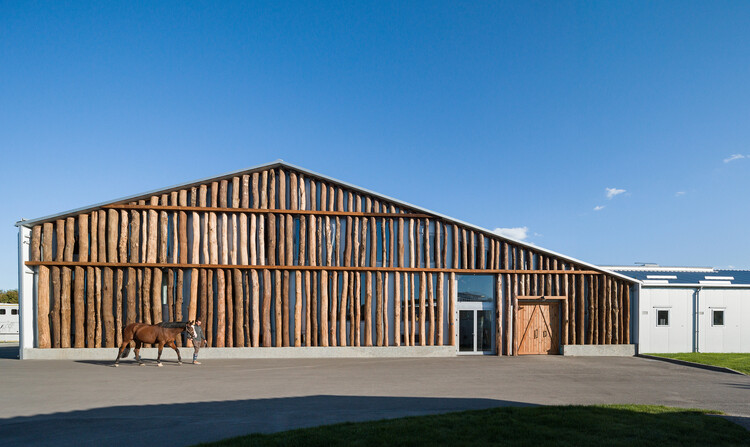 Oleg Drozdov (b. 1966, Volgodonsk, Russia) graduated from Architecture School at the Civil Engineering Institute in Kharkiv in 1990. After working for two years as an architect in Sumy, a city 180 kilometers northwest of Kharkiv, Drozdov left the country to pursue His artistic career as a painter in Europe, settling for several years in Prague. He returned to Kharkiv in the mid-90s to restart his architectural career, establishing his studio Drozdov&Partners in 1997. Parallel to work on commercial projects such as fashion boutiques, restaurants, galleries, commercial centers, apartment buildings, and houses in Ukraine and across Europe , the architect was involved in teaching and research projects that included developing new prefabricated materials and building types, as well as utilizing materials from demolished buildings. In 2017 Drozdov co-founded the Kharkiv School of Architecture (KHSA).

Since the beginning of the war, several of the studio’s built works were damaged. They include a villa near Kharkiv, hit by a rocket. VG Horse Club, which hosted a World Cup just last summer, was significantly damaged. And the first BMW showroom in Ukraine was completely destroyed. All three projects are situated on the outskirts of Kharkiv. Miraculously, other Drozdov-designed buildings in the city center remain standing. The following interview with Oleg Drozdov is an excerpt from our conversation over Zoom between New York and Lviv; we discussed his artistic career in Prague, experimenting with materials, tectonics, and pushing such notions as contemporaneity, transparency, openness, and exhibitionism; He also talked about the need to collaborate with weather and time, and endlessly investigate how his architecture can better engage with life and art.

Vladimir Belogolovsky: Since you settled in Lviv, what projects are you working on at your office?

Oleg Drozdov: Our current architectural projects, on which 15 people now work include a city villa and an apartment building in Switzerland, a couple of projects in Dnipro — a museum for the municipality and a city art gallery, Dnipro Center for Contemporary Culture (DCCC) — an educational campus in the Carpathian Mountains in western Ukraine, co-housing and co-working projects in Lviv, and medical campus in Kharkiv. Before the war we had 27 architects; Some left the country, others had to support their families, and there are those who are not ready to return to work for emotional reasons.

But before we could come back to all these projects, we started by working on designing and building shelters. Knowing that there was going to be a flood of refugees in this part of the country our team joined forces with the local studio Replus Bureau and Ponomarenko Bureau from Kharkiv to set up refugee shelters. We worked on these projects with the mayor’s office, as well as local construction companies. In the following weeks, we put up 17 shelters at schools and sports facilities in Lviv and several other cities in central and western Ukraine, serving at least 15,000 refugees over the first month alone. Parallel to that our architects volunteered and organized fundraising campaigns both to build these shelters and to keep our school afloat. While we are doing all this work, we had to put on hold our normal salaries and live and work as a real community, sharing apartments, responsibilities, and profits.

VB: Soon after graduating from university in 1990, you left for Europe where in the mid-1990s you focused on your career as an artist, experimenting with various painting techniques and surfaces. Could you touch on that?

OD: Upon graduation, I worked in Sumy on reconstruction projects in the city center for a couple of years. When work dried up, I packed my things and left for Prague. To survive I became an artist by working on small paintings for sale. Soon people started encouraging me to collaborate with galleries. Two years later, I was invited to have a show in Liege, Belgium. It didn’t happen because the space was quite large, and I did not have enough money to bring the work from Prague.

While I was a painter, I was painting architecture and my particular interest was in depicting how contemporary buildings would age. I was studying the idea of ​​how materials that symbolize the future would get a patina of time. I am fascinated by this collision. And even now, from time to time, I am going back to my art projects because nothing we can do without collaboration with time. Architecture that disregards time becomes obsolete. Just like people go through different ages so should buildings.

VB: How did your experience of being an artist influence your architecture?

OD: In my first architectural projects in the late 1990s, I started using gesso, playing with two different ideas — uncompromising contemporaneity and patina of time. We started our career with interior projects. We were among the first in Ukraine to use frameless glazing in our fashion boutiques and restaurants. These projects pushed such notions as contemporaneity, transparency, openness, and exhibitionism. But after a few years, we saw how some of the elements were getting old and bright colors would become dim. Eventually, we transitioned from accentuating newness and brightness to working with materials that would be more appropriate for aging. At the same time, we were interested in integrating with the surrounding context and blurring boundaries between the house and garden, interior and exterior, and finding commonalities between private and public, between commercial and public. Our objective was that any commercial space must have a public component. We also experimented with hybrids between architecture and graphic design. For example, in some of our projects facades and claddings positioned themselves almost separately from the rest of the buildings.

In the last 5-10 years we are focused on returning architecture to its essence by underlining our buildings’ tectonics. In 2015, I did a show Terralogia. The idea was to link geology, geography, chemistry, built environment, landscape, and architecture. I wanted to reexamine modernism. Starting from the 1920s many architects live in the paradigm of pursuing a better tomorrow. I am a child of that vision. So, I tried to study the aging process of the symbols of the future. What is the connection between the future and geology, archeology, and nature? That experimentation was done in collaboration with the weather as I would expose materials to the elements. It is an interesting partnership through which architecture always coexists.

VB: I read that over the last couple of years 80% of your projects are foreign. Yet, according to your website, a great majority of the projects that were realized, are in Ukraine, mostly in Kharkiv. Is this number accurate and what is the proportion of foreign versus local projects at your office today?

OD: The number is accurate, and it remains similar now, but we were not very lucky with realizing our foreign projects over the last few years. During this time, we did seven projects in Switzerland. But only one small restaurant was built in 2016 in Montreux. We also did two projects in France, but long municipal debates and local bureaucracy killed both. Then we had two projects in Spain; one of them, a villa in Altea near Alicante, is being completed. It was a relatively small but intensive research-driven project. We also had projects in Austria, Florida, Kuwait, and South Korea. Most of them were not built.

VB: Speaking of your architecture you often use such words as sensitivity, aesthetics of simplicity, life’s cycle, transformation, and erasing boundaries. What other words would you describe your architecture or the kind of architecture that you try to achieve?

OD: Pragmatic artist. I try to avoid being boring. [Laughs.] I see architecture and art as one thing. Art allows me to theorize on various issues. My architecture is developed through experimenting with materials and constructions. I believe that many of our projects lead to discoveries. Often, we put our commissions on hold if we see that our investigative projects require more attention.

VB: You said that you don’t like the notion of style and theories of style. What is architecture for you? How would you describe your architectural hand?

OD: I can say that it is pragmatic and rational. Time is my coauthor and the spectator. Our architecture is about events and processes, lives, and memories. Every project tries to be a discovery. We may be in the middle of the design process and we may still not know how the project will end and what shape it will take. Our architecture is a lot of hard work, but it is also a hobby. It is not business. We are sustainable and profitable, of course, but that’s not our goal. We treat every project as the last one. We do it as we may never be able to speak again. And more than once when our projects were already done, we would start over because we found a better solution, despite the financial losses. And if we realize that our contract does not allow us to develop a good project, we may even invest our own money to make the project stronger and deeper.

VB: And finally, is architecture art?

OD: Not only! [Laughs.] There are many narratives; art is just one of them.