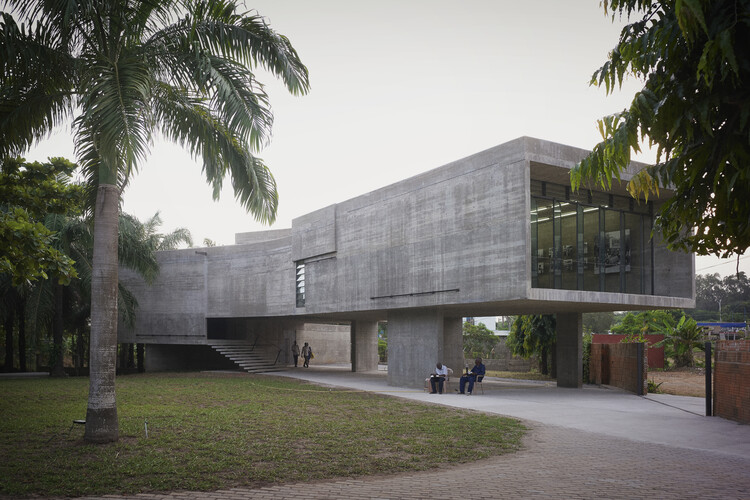 Text description provided by the architects. Nubuke Extended completes and reorients the Nubuke campus, making it into a cultural and civic hub in the expanding metropolitan area of ​​Accra and connecting it to a growing network of cultural spaces in Ghana.

Existing structures on the grounds have been refurbished, relocated, or adapted to meet Nubuke´s aims. The main bungalow, which up until now housed all functions in one building – exhibition spaces, offices, shops and storage – has been opened up, resulting in a creative co-working environment within a generous setting. Additional structures have been designed to create a multi-programmed environment that provides space and infrastructure for artists, cultural of diverse disciplines, and audiences of all generations. A new building hovers above the existing garden and frames a central green area, with Nubuke’s Indian almond tree at its center. It serves as a landmark that responds to both immediate and urban contexts. The massing strategy for Nubuke Extended is aimed at creating diverse spaces and spatial situations that are open for artists, curators, visitors, citizens, and children to engage with, while acting as an unifying character for the ensemble of buildings and landscapes on the campus.

Reorientation, reuse, and augmentation – The design of Nubuke Extended is rooted in the decision to maintain the 1980s bungalow and to develop a new structure ‘above’ the garden, as both the old building and garden have become emblematic of Nubuke as a space in the city. The design reorients Nubuke through a new structure that does not take away from but rather augments the existing qualities of outdoor green areas and frames unique landscape features, such as the centrally located Indian almond tree and an adjacent palm grove that has been incorporated into the garden .

The renovation of the Nubuke bungalow and additional structures, which were built and modified through many iterative design and building phases, has followed these principles of reorienting the grounds, augmenting existing qualities, and reuse. A shipping container has been shifted off of a concrete base that has become an outdoor stage housing a children’s library and bistro kitchen. An auxiliary building has been converted into a loft for Nubuke’s artist-in-residency program by simplifying the former floor plan and adding a bathroom and kitchenette. The bungalow, previously a labyrinthine collection of rooms, has been reorganized and opened up by extending all the exterior windows to the floor and creating views to the garden and interior courtyard.

Across the lawn, the new gallery building has been defined by cantilevered spans and slender supporting walls on the ground floor, which allow the garden to spread from the bungalow throughout the new structure, creating shaded space for activities and exhibitions to take place outdoors. The gallery volume, lifted from the ground, has been defined by a concave façade that bends to frame an urban-scale courtyard between the bungalow, the gallery, the property walls, and the palm grove, creating a center for the campus.

A multi-programmed art and educational space in Accra – The Nubuke Foundation, founded in 2007, with locations in Accra and Wa, has a wide range of programs supporting the arts, culture, and heritage of Ghana. The East Legon (Accra) grounds are defined by a large variety of day and evening programs that cater to many audiences spanning networks in the city, country, and region. The design of Nubuke Extended resolves this programmatic layering through a generosity and specificity of spaces. Green spaces and openness has been a driving design focus, as well as simplicity, which allows the spaces to become hosts to a variety of scenarios. Large gatherings for music events or festivities may spread underneath the new building, while on quiet afternoons, children may move on to the stage platform to read books from the library shaded by palm trees, and cultural producers may sit and co-work with others in the bungalow´s main space, the Nubuke lounge.

The new gallery, a split-level, one-room building with high ceilings, no columns, and exposed concrete walls, creates space for site-specific works of art and performances that characterize developments in Ghana’s and West Africa’s art world. Modulations in the floor, formed through a mezzanine, the height of the ceilings, and the walls, create a variety of spaces that allow both intimate and expansive scenarios for exhibitions, performances, and events. Users of the space are supported by an integrated rail system that allows for the hanging of objects, artworks, panels, and curtains throughout the space. The monolithic materiality of exposed concrete and the reduced colorscape of the new gallery and campus create a backdrop for colorful exhibitions and activities to take place in and around the buildings. Nubuke Extended was designed to be cosmopolitan in terms of character and ambition, inviting and provocative at the same time, for both local and regional programmatic scenarios.

Contextuality: rawness and climate – The massing of the new gallery responds to local climatic and urban conditions. Primary design drivers – the lifting of the building and its orientation in relation to the central lawn – create an iconic urban/landscape character on the campus, while also providing beneficial climatic consequences. Wind is allowed to circulate through the grounds above and below the new building, and green space is maintained and added through a green roof that spans across the extent of the exhibition volume. This improves both the microclimate on the Nubuke campus, one of the few remaining green spaces in East Legon, and helps to reduce the solar gain of the building through the roof. All six sides of the building – if thought of as an abstracted volume – respond to climatic parameters. In addition to lifting the building and the green roof (the bottom and top surfaces), the building surfaces towards the east and west are solid concrete walls, blocking out the tropical sunlight coming from both these directions throughout the year. The north and south sides of the building volume are characterized by large apertures that are oriented towards the prevailing wind direction and into surrounding green spaces such as the palm grove. As a result of these measures, the building functions climatically through natural cross-ventilation and passive strategies only, creating comfortable spaces inside and below the building.

The materiality of the new gallery building and the grounds is driven by the intention to expose construction materials and the idea of ​​rawness. The gallery interior and exterior are characterized by the off-shutter concrete that has been used for all the structural elements of the building – slabs, walls, and roof. All other architectural elements bring a reduced, raw material palette to the space that augments and softens the effect of the concrete surfaces: a polished screed floor, timber window frames, metal doors and handrails, and textile curtains. The overall effect harmonizes with the lush tropical vegetation of the Nubuke grounds and creates a strong identity and argument for regarding Nubuke as a space in Accra – a city that is defined by extensive sprawl, construction, and an influx of imported construction materials, building elements , and decoration. Through the strong and responsive spatial character of the building massing and the raw material palette, Nubuke Extended provides a local counterpoint to current trends in the city and an alternative place that offers the freedom of appropriation and inhabitation by the artist community.