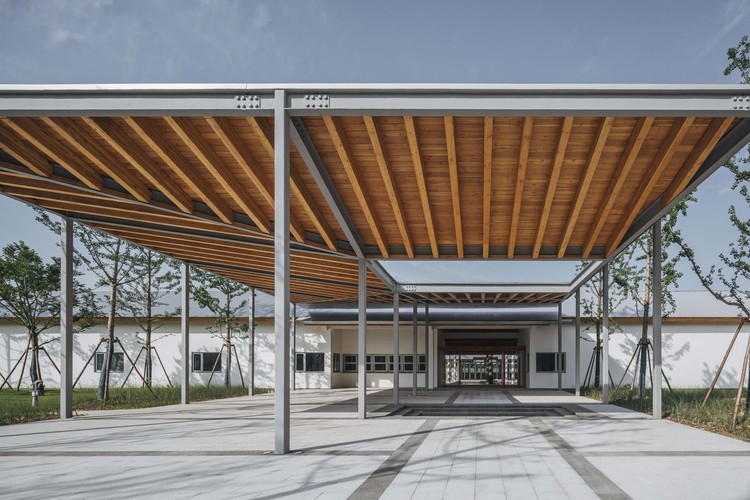 Text description provided by the architects. Jiabei Country Park is one of the seven-country parks planned in the first phase in Shanghai. It is built in the northwest of the central areas in Jiading District. Its total planning area is 14km² of which 7.39km² are so far completed and open to the public. Based on original farmland, woods, and a network of canals, this park provides agritourism, rural tourism, ecological wellness resorts, land conservation, and science education. The Northwest Visitor Center is one of the three visitor centers in the park. It is located the southeast inside the No.2 entrance, with the main road on the east and a small river to the north. The location is the former site of Xu Qin Village Committee, a traditional U-shaped compound built in the 1990s with a double-pitch roof and red tiles. It is a brick-concrete structure building with a concrete cornice and attic made of prefabricated concrete board. There is a two-story building in the north wing, a single-story building in the west, south, and east wing, with a quite open area in the east of the courtyard.

The original project was centered on how to rehabilitate the Village Committee without breaking its basic layout and make a juxtaposition of new and old through renovating the roof and constructing additional buildings. A Steel-Wooden structure porch with all lean-to roofs sloping towards an inner patio is added to the west of the existing building facing the entrance square. This entrance porch is made full of local featured sense of ritual and is set in contrast with massive main buildings. Administrative and operational departments like Ticket Service, Information Service, Tour Guide Service, Offices, and Duty Offices are arranged in the west wing by both sides of the entrance.

There are public restrooms in the southwest corner, and a kitchen in the middle of the south wing. The east wing is further extended to the north and used for a teahouse. It also includes a pedestrian entrance facing east and leading to the main road of the park. The ground floor of the north wing is designed for Specialty Shop and Bicycle Rental Spot while the second floor is designed for Lounge. A Turn-Around Space for a battery tourist shuttle bus is planned in the north, near the river. The spacious gallery extending to the north in the west wing and the added loggia on the north of the ground floor in the north wing are planned for bus waiting. The renovated wooden roofs in the west, south and east wing are extended to the inner court, which makes a winding corridor.

Inside the inner court, an eastward opening is kept in the southeast of the north wing as cycle parking. Separated by a parapet, in the inner courtyard, a large colored pond is set in front of the north wing. Much of the rest court enclosed on three sides is covered by a laminated bamboo grilled arbor supported by a light steel structure. Several Camphor trees are kept and growing out through the arbor, forming shading space mainly with hard paving material. The south of the inner court is designed as low-lying, below the terrain level of the winding corridor. Such tiny terrain variety has set off different space atmospheres inside the courtyard.

When the project was confirmed by the client and submitted to the Land Commission Vetting, we were informed that the part of the southwest Village Committee belonged to the permanent farmland (under no circumstances can the property of farmland be changed). Since neither the existing building can be preserved intact nor the follow-up schedule can tolerate a new project with obvious modification, all parties have compromised a monolithic building translation on the site plan: to move the whole building northward and slightly eastward out of the permanent farmland. The existing building was torn down and the new Visitor Center reconstructed has become an exact translational replica of the Village Committee which is representationally rehabilitated and refurbished. Fortunately, those three Camphor trees have been kept where they live but in a different position relative to the new courtyard.

The biggest difference brought by this project modification lies in the fact that it is impossible to rebuild such an unknown rural heritage of brick-concrete structure according to the principle for the preservation of the preexisting building and then reinforce it as designed before; the building can only be reconstructed with cast-in-situ concrete structure. Because of the construction cost control, the whole structure has to be made less complicated. The frame construction includes the girder system of the pitched roof. Concrete ridges beams and eaves beams of overhanging eave’s gallery are intentionally canceled. Therefore, apart from the main longitudinal girders between columns, there are only transverse concrete folded beams, on which glued laminated timber longitudinal purlins are used to support the wooden structure roof. Such a combination has demonstrated the logic of mixed structures.

All building wall is painted white, the wooden structure pitched roof is covered with natural silver-grey corrugated galvanized steel sheet. In the Park, this new public building featured white walls and a silver roof seems less jarring than those cottages and farmhouses built with white walls, and black or red tiles. This application of such idiosyncratic plain industrial product has been a new response to the banality of local rural characteristics of Yangtze River Delta regions.