Neuroarchitecture: How Your Brain Responds to Different Spaces

Have you ever heard of neuroarchitecture? What would spaces look like if architects designed buildings based on the emotions, healing and happiness of the user? Hospitals that help with patient recovery, schools that encourage creativity, work environments that make you more focused…

This is neuroarchitecture: designing efficient environments based not only on technical parameters of legislation, ergonomics and environmental comfort, but also on subjective indices such as happiness, happiness and well-being. 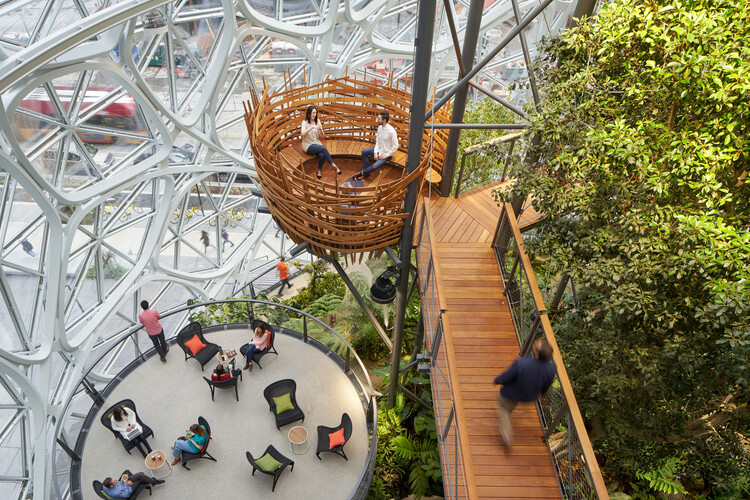 How many times have you been to a place, whether it is a park, a housing project, a mall, a house, a building, and felt depressed and anxious, or the opposite, happy and excited?

I remember when I visited Barcelona in 2008 and I walked into a church called Santa Maria del Mar and I cried with emotion: I didn’t want to leave, it was one of the most welcoming and exciting places I had ever visited and being there made me immensely happy and I didn’t know why.

With advances in neuroscience, it is becoming easier every day to measure these indices and understand how shapes, colors and scales can influence human perceptions. Currently, it is already possible to use MRI machines and virtual reality to understand how brain waves behave in spaces through biofeedback.

For example, with augmented reality glasses, we can show the project to the client in advance and measure their heart rate to understand their reaction when seeing the perspective.

How did it start?

One of the first to observe that spaces influenced emotions was the American doctor who created the polio vaccine, Jonas Salk. In the 1950s, Jonas spent time in Italy and realized that every time he visited the Basilica of St. Francis of Assisi, located in the city of Assisi and built in the 13th century, he became more creative and inspired.

When he returned to the US in 1962, he created a school called the Salk Institute for research in the fields of molecular biology, genetics, neuroscience and plant biology in the city of La Jolla, California.

For that, he called on the architect Louis Kahn, and asked for the project to be a mixture of art and science, where functionality and aesthetics walk side by side, inspiring scientists to do research as artists do art. Today the Institute building is one of the most incredible and emblematic buildings built in the 20th century.

In fact, the walkway between the blocks to the beach is reminiscent of the walk to the altar of the Basilica of Assisi, as Salk dreamed of.

How to apply it?

There is no ready-made recipe to apply neuroarchitecture, but there are some details that can be observed in the construction of spaces.

For example, in acoustics it is important to pay attention to the sounds of the environment depending on the type of project. Are there street sounds disturbing concentration and sleep? Would it be necessary to use acoustic materials? If it’s a work environment, to what extent does a very open coworking office interfere with production?

In the case of lighting, we also need to observe how light enters the space. The human body is more comfortable with natural light, but if a lot of artificial light is needed, what types of color and intensity of the lamp could not cause glare?

If it is a relaxation space like a restaurant or even a residence, the use of yellow lights, which are more cozy, may be more convenient. If it is a hospital, a healing and treatment environment, perhaps other colors like blue and orange, known as refreshing, it would be more interesting.

When it comes to furniture, for example, in a kindergarten, curves would be more interesting than corners, which resemble danger and fear, which can make some children scared and reactive.

It is also known that vegetation is associated with the connection with nature, which, in addition to helping to raise the quality of the air inside the space, brings calmness to users.

When we talk about colors we know that warm colors like orange and red bring excitement and movement and cool colors like blue and green bring calm and serenity. We also know that color contrasts cause energy and analogous colors cause comfort, so there must be a very strong study of chromatic composition to measure user satisfaction levels.

Everything will depend on the type of space, the client’s requirements and the context of the construction. And in fact, there is not just one item to focus on in a project that takes neuroarchitecture into account, in the end it is the intersection of all that: color, natural and artificial light, landscaping, scale, materials…

Who Has Been Standing Out?

Some practices have been working in the area of ​​neuroarchitecture, but there are also professionals who can specialize in consulting on projects by other architects. Let’s get to know some:

NacLab is a Seattle-based practice specializing in neuroarchitecture, sustainability and biophilia. In their portfolio of projects, many schools and hospitals are always centered on users and on the levels of healing, satisfaction, creativity and happiness of end customers.

NBBJ is an office based in several cities around the world focused on experience design in projects ranging from urban projects to hospitals, stadiums, landscaping and schools. Among his most famous projects are the Google + Samsung offices in Silicon Valley and the sphere-shaped Amazon office in Seattle.

Perkins&Will has existed since 1935 and has branches in several cities around the world, including Brazil. It works in projects such as corporate, commercial and hospital environments with a focus on humanity and sustainability.

Where to Study it?

For those who want to specialize or understand a little more about neuroarchitecture, here are some indications:

The Brazilian Academy of Neuroscience and Architecture was founded by architects Gabi Sartori and Priscilla Bencke, passionate about neuroscience and architecture. A partnership that started through trips and specialization courses in the area.

The objective is to train professionals, disseminate knowledge, develop studies, integrate multiple areas in a systemic view of space, behavior and well-being. There you can find several courses divided into specific modules such as sound or aromas, or also a more complete training.

NeuroArq also promotes an annual congress to discuss the most important research on the subject.

NewSchool is a San Diego-based architecture and design school focused on sustainability, neuroscience and biophilia studies.

The school offers short courses of one to two months, as well as more complete specializations on the subject. The most well-known are the Neuroscience certifications for Architecture and Urbanism for Health that enable architects and designers to think about the brain’s connection to the built environment.