Reflecting on what the materials of the future will be like, we will talk about a material that is booming in Barcelona and which perhaps leads us to respond by suggesting that, as always, everything comes back.

For some years now, hydraulic mosaics have been back on trend, generating interest due to their high artisan value and their diverse designs, perfect for combining traditional environments with avant-garde details.

Design Trends: The New Remodeling of Homes in Barcelona

Modernist hydraulic tiles are one of the great treasures, among the many others, hidden in Barcelona. Many of them have been condemned to destruction over time. Fortunately, however, historic pieces of great value to the city are still preserved in buildings of various types, from private homes to bars, such as the Sala Beckett menjadordesigned by the architects Flores & Prats. 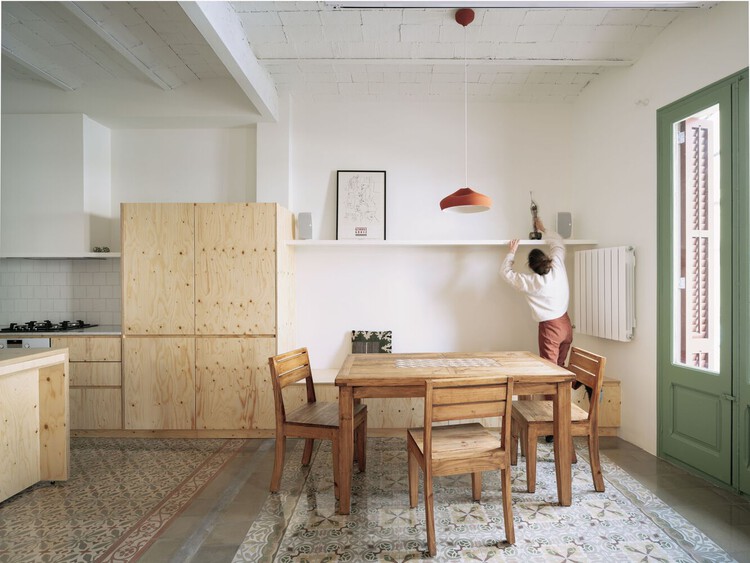 Now, what is a hydraulic mosaic tile? It is a decorative pigmented cement tile, suitable for both indoor and outdoor use, which, unlike a ceramic tile, is not made of clay or adobe, nor does it require firing.

Their history began with the Arabs in the 9th century, who introduced them to Spain. However, it was not until the mid-19th century that they flourished again, following the development of a revolutionary technique for their production that allowed with different motifs to be made on a large scale and without the need for firing to harden them, significantly reducing manufacturing costs. Thus, this material began to be marketed both within the country and abroad, mainly in France and Italy.

This new and disruptive method used a hydraulic press – hence the name – and a mold to create the designs by combining colors. The main advantage was that tile production could be carried out in a single step, whereas the traditional procedure for making ceramic tiles involved applying the colors separately and the tiles after each step, a time-consuming and labor-intensive system. The hydraulic tiles were pressed and left to dry for several weeks.

The structure of the traditional hydraulic tile is approximately 2 centimeters thick and is divided into 3 parts. The decorated surface is a thin layer 4 millimeters thick, composed of a mixture of white Portland cement, marble sand, and pigments – each color is placed in the corresponding division of a mold. The next and second layer, the brassatge, is similar in thickness to the first layer, is made of a mixture of gray Portland cement and sand, and its purpose was to absorb any excess water from the top layer. The third and last layer, the thicker one, measures approximately 12 millimeters and is composed of a mixture of gray Portland cement, common cement, and sand. This mixture has a porosity that facilitated its adhesion to the floor when laying. The tiles were made in different shapes and sizes, the most common being 20 x 20 cm squares and 11.5 cm hexagons.

The Catalan company Butsems & Cia The first recorded company was specializing in the production of this material, dating back to 1857. However, the event that introduced hydraulic tiles to society took place 10 years later, at the Universal Exhibition in Paris, and was carried out by the company Garret, Rivet & Cia. Subsequently, another company which appeared, thanks to its modern machinery and massive production capacity, ended up making this type of tile popular in Barcelona. And so this activity continued to expand, with many more companies being set up, such as Escofet, Fortuny & Ciafounded in 1886, which stood out for its innovative designs and took this type of paving to all of Spain and Latin America.

This popularity of hydraulic mosaic coincided with the rise of Catalan Modernisme, described as its main driving force: innovative and daring motifs were created, unimaginable in other times. The companies usually had specialized draughtsmen and sometimes hired prominent artists to create particular designs. The motifs varied between geometric shapes, vegetation and flowers, more organic figures, and sometimes animals or human figures, and used a wide range of colors.

In the history of Barcelona, ​​there are several architects, craftsmen, and designers who dared to play with this method. Among them, and having been one of the most renowned, we find Antoni Gaudí, who designed the floor that currently paves the pavements of Paseo de Gracia. These mosaics have become a symbol of Barcelona: we can find them in the form of magnets decorating fridges or printed on T-shirts and tote bags, among many other things.

It is worth mentioning the similarity of the design of hydraulic mosaics in some spaces – generally main or particular areas – to that of carpets: a central part forming a pattern, complemented by an outer frame, formed by monochromatic tiles of discreet tones. These ‘mosaic carpets’ were usually laid in areas such as the living room, hall, and dining room, and sometimes in special rooms. In secondary spaces, the mosaic design was simpler.

The boom of this material disappeared with the construction of the 1960s, a time when there was an emerging and unavoidable need to reduce the cost of materials, and, unfortunately, mosaics fell into disuse. From then on, moreover, many beautiful mosaics began to disappear with the demolition or remodeling of old buildings, threatening their disappearance.

In recent years, interest in hydraulic mosaic has been revived and it is considered a quality design element by architects and interior designers. Hence, if old mosaics are not recovered in renovations and refurbishments, new ones are laid, and there are many local companies that manufacture them. The years have passed, but the manufacturing technique is almost the same, the differences are only improvements.

Here we tell you how they are made, step by step:

So, to conclude, as mentioned at the beginning of the article, “everything comes back”. This is not a general rule for all materials, nor is it an absolute answer to the question. But, allowing for their survival, this criterion has applied in the case of hydraulic tiles, which, fortunately, have returned to Barcelona.