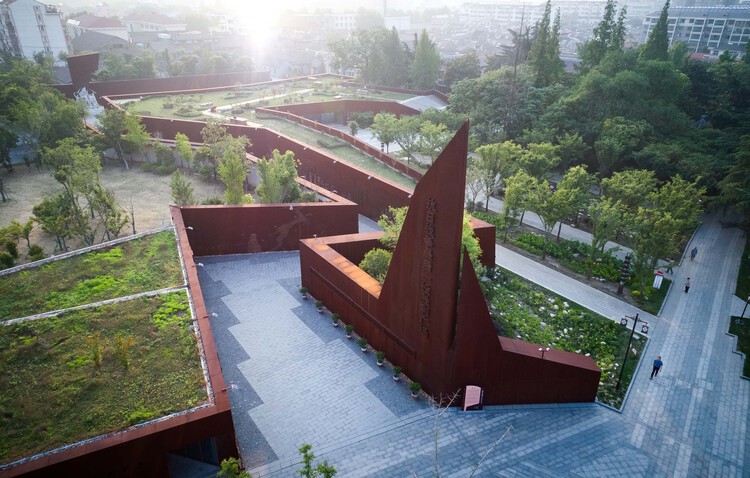 Text description provided by the architects. On August 15, 1945, Japan announced its unconditional surrender, and the fourteen-year war of resistance against Japan came to an end. However, the war did not subside. Until the end of 1945, there was another county in the south of Jiangsu that was still occupied by the Japanese army, which was Gaoyou city. On December 19, 1945, the central China Field Army of the new fourth army launched a final attack on the Japanese army who refused to surrender in Gaoyou. On December 26, after the victory of the Gaoyou campaign, Suyu received the saber presented by Japanese Senior Minister Iwasaki in an auditorium in the people’s Park, and Gaoyou finally ushered in its liberation. This is the last battle of the Chinese people’s war of resistance against Japan and the last City liberated in the war resistance against Japan. 70 years later, the smoke of war has long dissipated, and the place where the Japanese invaders surrendered to the New Fourth Army is still standing in the center of the downtown, quietly telling that magnificent historical moment. For more than 70 years after the war, the “Park auditorium” (the place where the Japanese army surrendered at that time) has been mixed with the Gaoyou martyr cemetery, people’s Park, university for the elderly, old government office building, state department head gate, and various civilian houses. The surrounding environment is quite poor. In 2015, in order to commemorate the 70th anniversary of the victory of the Anti-Japanese War, the Gaoyou municipal government hopes to organically integrate the memorial hall of the last battle with the surrounding environment and the city through design. At the same time, an auxiliary Pavilion will be added to display the historical materials of the Anti-Japanese war as a supplement to the pavilion of the last battle. And a new tourist center will be built as a supporting facility for the whole park.

The whole project is divided into a red theme area, an ancient city-style area, and a green park area. Among them, the most important red theme area is divided into the “trace of memory” – the road of the Anti-Japanese war, the “war ending Memorial” – Victory Square and the “road to peace” – a streamlined path leading to Beilin and people’s park. The design emphasizes the “sense of experience in the process of moving”, takes “scars” as the composition method, highlights the time concept of “the last battle” with the change of space atmosphere, takes landscape art as the main architectural means, integrates the surrounding environment, and guides the experimenter to think more deeply about the war while interpreting the history of the war.

“Trace of memory.” The “trace of memory” starts from the main entrance square and forms a road surrounded by weather-resistant steel plate walls, symbolizing the difficulties and twists of the road of the war of resistance against Japan. We have adopted narrative design techniques. There are a total of 14 weatherproof steel plate walls on the road of the war, symbolizing the 14-year Anti-Japanese war. The walls are combined with bronze carvings to reproduce the history of the Anti-Japanese war for people with scenes of these stories. As the road became lower and lower, the steel plate wall became narrower and narrower, gradually downward. The space atmosphere also became more and more depressed, aggravating the mood of sadness and anger. At the same time, it prepared the psychological groundwork for entering the climax space – Victory Square.

“War ending Memorial.” Along the winding and narrow road of the war to the end, follow the light up, and usher in the suddenly open square space – Victory Square. The towering victory torch sculpture in one corner of the square symbolizes the final victory of the anti-Japanese War! The grief, anger, and depression accumulated on the road of the war were completely relieved here, and the climax of the space also came – the huge mirror pool reflected the memorial hall of the last battle of the anti-Japanese War (where the Japanese army surrendered). The calm mirror reflection expresses taking history as a mirror as if it smoothed the war pain in the “trace of memory”. After experiencing the cruelty of the wars just now, people can’t help but sigh that the final victory is hard won!

The whole Victory Square is dominated by the sculpture of the “Revolutionary Torch” on the south side, which means that the tortuous road of the war of resistance has finally ushered at the dawn of victory At the same time, it symbolizes that under the leadership of the Communist Party of China, the red revolutionary fire will never be extinguished. The hollowed-out plate landscape wall on the west side of the square faintly reveals the mottled shadow of trees behind it. A large number of freehand slashes on the steel plate wall separate the texture, metaphorizing “strong wind, and sturdy grass”. Together with the towering torch sculpture on the south side, it means that wherever the revolutionary fire goes, it will defeat the enemy with the momentum of destruction.

After experiencing the twists and turns of the road of the war and the victory moment of Victory Square, people can enter the newly-built sub-pavilion from the southeast side of the square. The new pavilion is located on the east side of the square, and the building seems to grow out of the earth. It intervenes in the site in a hidden, low-key, and powerful way, forming a new overall atmosphere with the old Pavilion, corridors, and surrounding cities. The sub-hall has three exhibition halls, which are divided into upper and lower floors, connected by indoor ramps. Each facade forms a wedge shape, which echoes the broken line-shaped Anti-Japanese war Road and the broken line outline of Victory Square. The entrance adopts the method of cutting volume, carving a thick sense of volume and a strong contrast of light and shadow, which echoes the North corridor in form and reflects the deep traces left by the war in the image. The triangular glass window in the shape of a “spark” is hollowed out and gradually changed on the main facade of the sub-hall. At night, the spark flickers, like the star fire scattered by the “revolutionary torch”.

After visiting the auxiliary hall, you can go up to the entrance of the last battle memorial hall through the steps or ramps on the north side of the square. It was originally an “auditorium” with a combination of Chinese and Western styles. It was built in the 19th year of the Republic of China (1930). It is located in Gaoyou people’s Park, so it is called the “Park auditorium”. On December 26th, 1945, after the victory of the Gaoyou campaign, Suyu accepted the saber presented by Japanese Dazuo Iwasaki in this auditorium. Now, it has been transformed into a “Memorial Hall of the last battle of the Anti-Japanese War”. Every year, more than 50,000 people come here to touch history and feel the Gaoyou battle of that year. Standing at the entrance of the auditorium overlooking the whole square, the towering torch, the pool like a mirror, the lights of stars, and the prairie Burning Weeds together form a vivid picture that implies the revolution “a single spark can start a prairie fire” “.

“Road of peace.” After leaving the memorial hall of the last battle, you can reach the forest of Steles and the martyrs’ cemetery by going east through the “road of peace”. After your mood is calmed, you can complete the whole tour. You can continue to visit the martyrs’ cemetery and the people’s Park to the north and return to the tourist center at the entrance to the south. The slash-cut shape of the tourist center and the facade of the starlight window continue the style of the sub-Pavilion. Combined with the space design of the park entrance and the bayonet sharp entrance logo sculpture, they form an important space node of the south entrance of the whole park. The skin of the tourist center adopts the same method as that of the new museum. With the image of a “spark”, triangular holes of different sizes are opened on the facade to form a rich facade light and shadow effect in the sun. The Victory Square in the last battle of the Anti-Japanese War adopts the metaphorical design method. The crack space formed by the corridor metaphors the war wound, and the calm of the mirror metaphors the healing of the wound. It sublimates the architectural space into a spiritual space, and gives people a unique and profound spatial experience with a strong visual impact, so as to achieve the dual commemoration of form and content, and express the unique commemorative atmosphere and artistic appeal of the building. In the lush people’s Park, the memorial hall of the last battle of the Anti-Japanese War, the martyrs’ cemetery, and the state headgate are integrated with each other, turning into an indelible mark in the long river of urban history and a monument in people’s memory.