‘MIGRATIONS’ AT THE VENICE ART BIENNALE 2022

Part of ‘The Milk of Dreams’, the International Art Exhibition of the Venice Art Biennale 2022, Marguerite Humeau’s ‘Migrations’ is a new body of work made from resin, salt, bone, ocean plastic, glass and algae. The installation is composed of three sculptures named after ocean currents: El Niño, La Niña, and Kuroshio. Somewhere between levitating, collapsing, and almost flying away, the three sea creatures of the artist’s mythological ecosystem expresses an understanding of mortality that transcends the domain of humans. ‘I thought that maybe because of climate change and mass extinctions, animals are also getting conscious of their own death, and maybe they’re developing their own rituals, mythologies, and spirituality,’ Humeau tells designboom. ‘In the past three years I’ve developed a series of death rituals and dances, many of them about marine mammals specifically because I do lots of research around their existing rituals,’ the French, London-based artist adds. Find out more about ‘Migrations’ and the work of Marguerite Humeau on our interview below.

designboom (DB): Can you tell us a few things about the new body of work you are presenting at the Venice Biennale?

Marguerite Humeau (MH): The work is called ‘Migrations’, and it’s composed of three sculptures called ‘El Niño’, ‘La Niña’ and ‘Kuroshio’. They are named after sea currents. It’s actually an extension of a work I did in 2019, which started for my show ‘MIST’ at CLEARING, Brussels, and then ‘High Tide’ for the Prix Marcel Duchamp prize. My original speculation was about the origin of humankind researchers, and how a lot of think that we became spiritual when we became conscious of our own death, from an individual point of view, but also as a species. There are a few researchers that think this, and especially one who I really love is Joseph Campbell. He talks about how, for him, this moment in time was the beginning of spirituality and the birth of mythologies. Because the first impulse we humans have had when we realised our own death, as individuals, but also the death or extinction of our species, has been to try to find ways to transcend it. 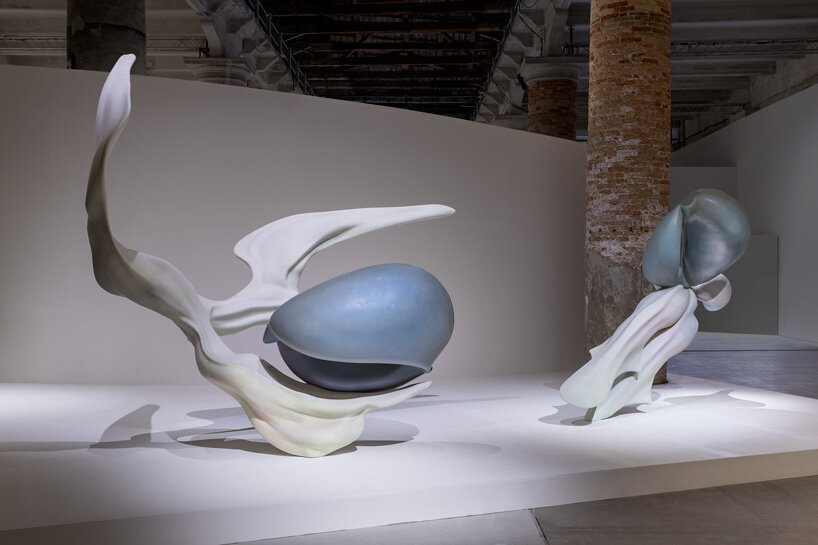 MH (continued): When you look at many religions around the world, or grand narratives, or mythologies, they’re all connected one way or another to the idea of ​​eternal life or questions like, ‘where do we go after we die?’ or, ‘do we get reborn?’. So I thought that maybe because of climate change and mass extinctions, animals are also getting conscious of their own death, and maybe they’re developing their own rituals, mythologies, and spirituality. In the past three years I’ve developed a series of death rituals and dances, many of them about marine mammals specifically because I do lots of research around their existing rituals. Actually one of the inspirations behind the show in Venice comes from a video I saw of a female whale that was carrying a baby that had just died. For many weeks she was carrying it on her head. For this work specifically, I was also thinking about climate change, the rise of the water, and especially in Venice because the water is so overwhelming present everywhere; It seems that the city is counting the millimetres until it literally drowns. What do we do when this happens? I guess we’re forced to migrate. So I was interested in the idea of ​​migration, as in to be physically forced out of where you live to go somewhere else. But also the migration of the mind, the migration of the soul once you die. I was thinking about a group of marine mammals who are migrating. The show operates on different levels. Maybe this is my most mysterious work, because there are different ways of interpreting it. 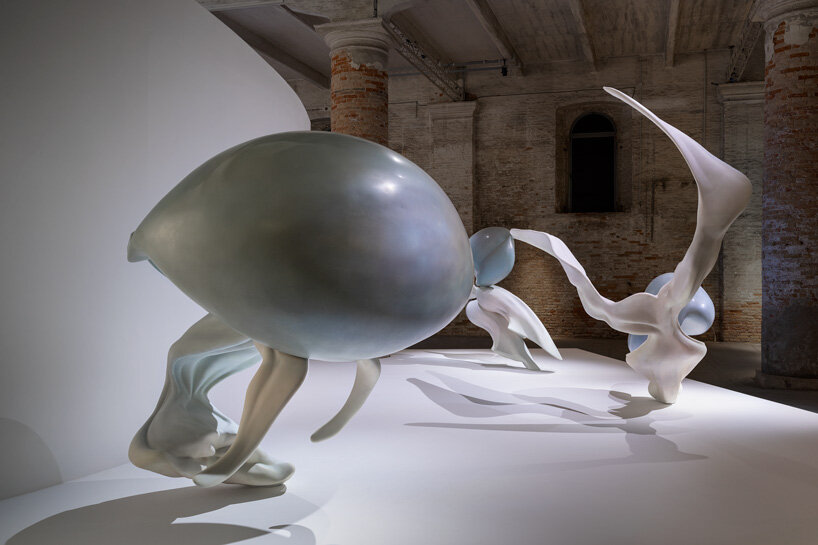 MH (continued): I don’t know if you experienced the same during COVID, but I felt that there was a huge change of paradigm. In previous works I had been more interested in accelerating life to the point it becomes eternal, through technologies or other means. I was interested in accelerating this process to the point when it becomes horrifying. This has totally shifted now, and I’m much more interested in vulnerability, imperfections, and fragility. There is something quite overwhelming about what’s happening in the world at the moment. Then, the figure of Atlas came to mind, the Greek titan who’s carrying the sphere of the heavens on his back. To be honest, I’ve felt very much like that in the past two years, like you’re almost overwhelmed by your own weight. Thinking about the challenges that we humans have to tackle, especially with climate change. It is very complex to understand how we can act on an individual level, what we should do to have a real impact in the world, and also how to manage those challenges at a collective level. 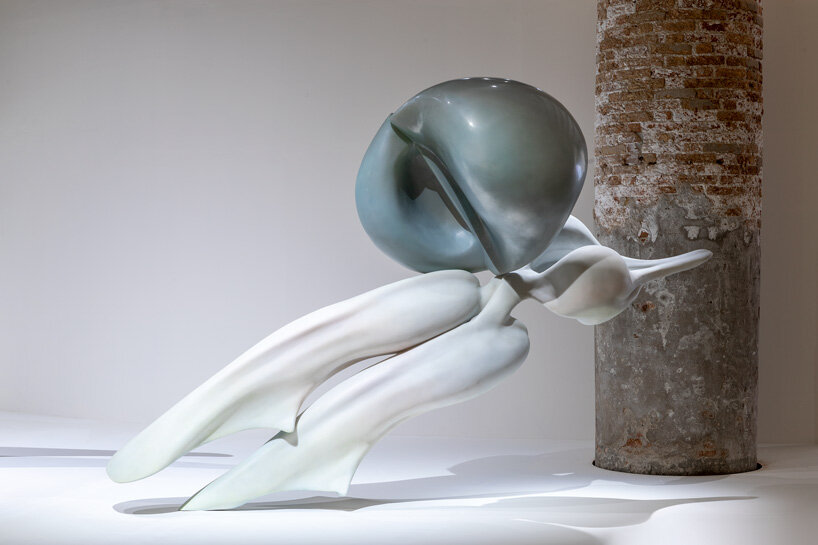 MH (continued): So, I had this image, and then I had the image of the whale carrying the baby, and like that I started to think about bubbles, or big water drops that could be like the bags one might carry on their shoulder when they’re migrating, or they could also be crystal balls, or spheres in which you can project your future but also your memories, your past. And when you migrate, what do you take with you? What is it that you want to protect? I was playing around with that and developed the work like this.

I wanted to have one of the beings in this ecosystem, in this group, totally overwhelmed, like Atlas, who’s totally overwhelmed by its own weight. I wanted it to seem really fragile, almost a bit sick, one of its ‘arms’ looks almost like it’s broken. I worked really hard on the balance, and I was also thinking that yes, we’re on the cusp of falling, but maybe we could also transcend. So the beings look like they’re levitating, almost falling, collapsing, but also almost flying. They’re all slightly unbalanced, but also kind of moving forward. This was quite new for me, I broke the symmetry of my work that was quite present before. I brought more imperfections, I worked on the balance, and I wanted them to feel really light but very heavy at the same time. The second being more like it’s traveling, carrying something, maybe on their head or on their hands. And the last one is much more hopeful. It’s almost like a wave coming out and showing the way. We don’t really know where it’s heading to, but it’s heading somewhere. There’s something more hopeful about it.