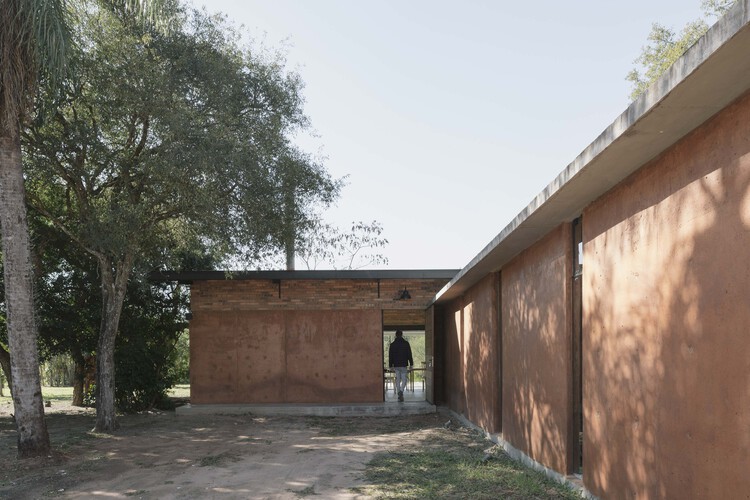 Text description provided by the architects. It was January 23, 2020. A hot morning, like so many during the summers in the capital of Paraguay, Asunción. The temperature hovered around 29 degrees Celsius at just 8:30 am. The characteristic sound of the mobile phone makes its appearance inside the office of the small studio, located in the Ricardo Brugado neighborhood, better known as the Chacarita neighborhood. At the third repetition Solanito picks up:
-Hello, what are you doing, Tapiti?
-Of course, Tapiti, I remember, right away.
-Alright, see you on Friday Tapiti, greetings to Luce.
Before any questions, an answer. Pablito wants to get together to discuss his house that we talked about yesterday after soccer. The story of some determined friends building a future home.

Pablo and Luce are a newly married couple, he’s Uruguayan and she’s Paraguayan with relatives in Uruguay, both graphic designers who work remotely for companies abroad which leads us to the location of the lot, in the city of Limpio, the Surubi’i neighborhood. By private transport, it is 45 minutes away from Asuncón, close enough for maintaining daily and social activities but also far away enough to maintain a suburban condition, with ample terrains, vegetation and tranquility. The neighborhood is experiencing a building boom governed by regulations which condition the project to the approval of the neighborhood council.

The latest debates within Míninmo Común have centerd on the current housing conditions and ecological construction techniques that are gaining popularity in the spectrum of Paraguayan architecture. We, educated in building with brick and handling adobe alternatives, have been formed by these materials by the project that was in the process at the moment, located in the interior of the country, 350km from the capital. The conditions of this project were very different, now we would have more resources available. We wanted to experiment with rammed earth, due to the good results of colleagues and friends, a technique with excellent conditions for the climate of our country.

When doing the first tests, since we’d never worked in this way before and since we are our own builders, we began to realize that the timeframes were very long within this construction process. We needed more people, pneumatic rammers, special formwork, more resistant lintels and an endless amount of other things order to carry out the project. This resulted in a process of disappointment at the impossibility of carrying out the work in the intended way, since the costs exceeded the construction standards and the budget was quite limited. In addition to the anguish we are left with the reflection: Would it be logical to think that sustainable architecture is only for people with sufficient purchasing power, people who are able to pay for their work and hence able to lead a better life? We were not willing to give up on the qualities of the land, we wanted to be able to build for Luce and Pablo as for everyone else, which leads us to new experiments.

Our craftsmen building the formwork have an amazing professional ability. Mr. Eusebio, approximately in his forties, leads the team. His father, brothers, friends and anyone who can keep up with the pace work with him, with breaks of rounds of tereré, with the mission of going the work. They arrive, props and boards are unloaded and the symphony of saws and hammers starts. It goes on until they have a beautiful ceiling ready to receive tons of concrete that they themselves take care of mixing and pouring.

The mission was similar: instead of the roof, we would cover the horizon, hollow prismatic wooden walls would serve as formwork. With the ability of Eusebio and his collegues, it was only a matter of a couple of hours for the artisanal task to be completed. Modulating each wall in the measure of standard cuts of commercial wood would save us even more time. 2.40 x 2.40 meters was the measurement from floor to ceiling of each module and determining the thickness to be 15 or 20 centimeters, which was ideal due to the consumption of material.

The project, with twists and turns since its conception, consisted of a simple volumetry, without many structural risks: an L submerged among the vegetation. The western sun falls every afternoon in the most closed part of the house, and in the mornings the spacious living room, kitchen and dining room are illuminated. But the most important thing is to guarantee rest with cool rooms, and with the future idea of ​​enlarging the family, comfort had to be guaranteed. The earthen walls would protect the intimate sectors, a slab of orchard cultivated by its own owners and supported by fine metal pillars that would feed little Agus.