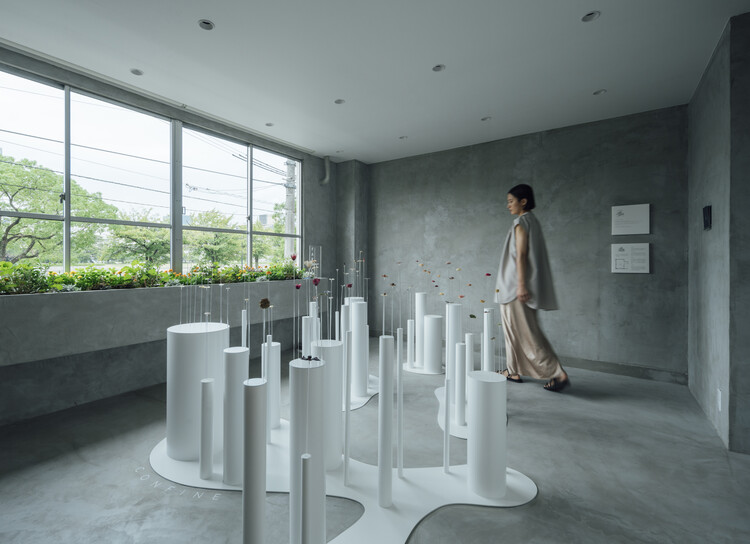 Flowers / Leaves / Fruits. Flowers, leaves, and fruits are the forms that are created when plants are nurtured by the blessings of the earth and sunlight. Little Witch Lab is a gallery that exhibits the work of Mutsumi Fujimoto, an accessory artist who uses a unique technique to contain that momentary beauty and sublimate it into a permanent beauty that does not change over time, like a jewel worn by a human being. It will be the atelier of Mutsumi Fujimoto and a gallery to exhibit her works. She chose Tokaichi in Naka-ku, Hiroshima City. The building is located where the old Ota River, which flows through the city and leads to Hiroshima Bay, meets the long-established Kusayo Inou Shrine. The location is both dignified and quiet, and the time passes slowly, making it a wonderful place in the city.

The atelier requires delicate work down to the tenth of a millimeter, so although it is attached to the gallery, the client requested that the two spaces be kept separate. We proposed a new element to the gallery, an experience, where visitors could see and purchase works of art, and experience the artist’s thoughts and intentions through the Little Witch brand, creating a gallery like a laboratory where works of art are created just for them . The process of transforming natural materials into works of art was categorized into four words, and based on these themes, an art-like architectural device was created, which visitors could walk through and experience.

The four themes are: 1. Growing materials [FARM] 2. Encapsulating materials with acrylics [CONFINE] 3. Selecting flowers/leaves/fruits and metals (accessory parts) that suit your body [PARTS]. 4. The two are joined together in the studio to form the work [FIXED]. The design was based on the double structure of creating the overall space while creating the vase as an architectural device based on each theme that would not be defeated by the strength of the work, and although it was a small space of fewer than 10 tsubos, it ended up being a project that took a considerable amount of time.

Farm. A flowerbed was placed inside the gallery to match the existing large opening overlooking the old Ota River, creating the impression that the green landscape of the riverbank was bleeding into the gallery. To prevent the roots from rotting, the discarded water from the flower beds is caught by a glass funnel and a container, and by holding in the space what would normally flow and disappear, I hoped to convey the richness of the earth’s life force in the brown liquid, like coffee. The flower beds are periodically replanted according to season and seasonality. The materials grown in this space will be used for future works of art, and the work is full of possibilities for the future.

Confine. The flowers, leaves, and berries that have grown up are plucked and encased in acrylic, giving them the beauty of life and the luster of jewels at the same time. To convey the beauty as if time has stopped, we thought of a staging that makes the flowers appear as if they were floating in the center of the space. Plants are divided into three elements: earth, stems, and flowers. Combining the flat structure of the earth and the vertical structure of the stems, I devised a vase that looks like a desk placed upside down. The organic shape of the vase is inspired by the puddles of water that form on the ground after rainfall, and pipes that resemble round stems of various sizes rise from the base. The owner himself drilled a 1mm hole vertically in the cross-section of a 3mm round bar made of the same material as the acrylic clothed in the flower itself, connecting the flower/leaf/fruit and the vase in a way that even the craftsmen on site would be surprised to see. The color and formative power of flowers created by nature, and the luminosity created by sealing them forever with human hands. I hope you will be touched and moved by the beauty of each piece of work before it has the function of being worn as an accessory.

Parts. The wall on the side of Sorayasu Inou Shrine is lined with four iron boxes bearing the names of the seasons. The panels that block the existing openings are randomly placed with round holes so that light can penetrate through them and convey the world of the shrine as much as possible. When the lid of the box is opened, the flowers inside are classified in detail by type, and labels with the name of the variety and the language of the flowers are pasted on them. Even among the same type of flower, the shapes and colors of the forms created by nature vary widely when compared to one by one. Here, visitors can choose flowers, leaves, and berries that match their skin color and frame, and select accessory parts such as earrings and necklaces to create one-of-a-kind accessories that are uniquely created for them.

Fixed. To eliminate the connection with the atelier, an opening made by a small arch was made in the wall separating the two spaces. The selected flowers/leaves/fruits and metal fittings are brought into the atelier and joined together. When the stone wall luminaire glows, the door is opened again, and the work is completed only when the person wears it. It takes less than 20 minutes to complete the work. While waiting, we hope that visitors will visit the adjacent river and shrine and spend some peaceful time while preparing to receive the work. The spatial composition of the atelier and the gallery, two functions that are connected in one space, is such that they do not interfere with each other. By creating an attraction-like device in the space, where the value of the brand naturally increases as visitors move, choose, and feel, we believe we have created a new type of passive gallery that was born out of the Corona Disaster.