Bright colors provide an uplifting environment for formerly homeless tenants at a Los Angeles complex with micro-apartments and a community building that was designed by local studio Lehrer Architects.

The complex, Willowbrook Apartments, provides permanent, supportive housing for veterans with disabilities who have experienced homelessness.

Located in the Willowbrook neighborhood in South Los Angeles, the complex sits next to a popular church and near public transit options. It was built on a trapezoidal site that had sat vacant for years.

Meant to be a model for future projects throughout LA County, the complex was created in partnership with LA County and a nonprofit development consortium, RETHINK Housing, which Lehrer Architects helped start.

The complex consists of a linear bar with vinyl roofing and a taller, angular building with a sloped roof covered in asphalt shingles.

The buildings are set around a courtyard and plaza-style parking lot, and the whole assembly is “orchestrated to become a coherent urban campus, even on a small scale”, the team said.

Exterior walls are clad in cement plans. The plans were chosen for their “great durability, aesthetic and resilience – not to mention, no termites”, the team said. The elevations facing the courtyard are finished with stucco.

Weaving through the complex is a yellow-painted pathxway designed to provide “an enriched sense of arrival”.

“Each bend and turn in the path provides real or implied mindful pause from the street to the front door, enhancing the separation from the public realm to the private,” the team said.

“This is something that is meaningful and critical for all residents, but even more so for those that have previously been unhoused.”

Apartments are fronted with covered patios that are shared between two units. The patios provide both individual and shared space and allow for indoor-outdoor living.

The studio apartments are set side by side, with mirrored layouts that helped maximize the efficiencies of construction.

Along one side are an entry closet, a galley-style kitchenette and a countertop that morphs into a shelf and desk. Along the other side are a spacious bathroom and a combined living-sleeping area.

“Whilst petite, the units are designed to have the longest interior view possible as well as the longest counter space possible, and an overall generosity of natural light and exterior view,” the team said.

High ceilings give the studios an airy atmosphere, and skylights usher in daylight.

Interior finishes include white-painted drywall, standard residential cabinetry and quartzite countertops. Floors are a mix of concrete and epoxy.

In addition to universal design elements, such as wide passageways, the team incorporated splashes of bright yellow throughout the complex.

“The yellow – along with apricot, fresh green and a touch of sky pool blue – is used to define the couplets of units, energize the place without over-energizing it and keep it livable with a joyous edge.”

Willowbrook Apartments is meant to be a model for similar developments, which historically have faced numerous challenges, said Lehrer Architects founder Michael B Lehrer.

“For these communities to be realized – with a level of beauty, intention and design-consciousness not often seen in these types of projects – everyone involved must go beyond their professional and, often, financial comfort level,” he said. 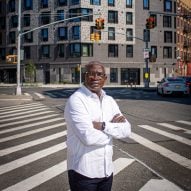 Lehrer added that to destigmatize affordable housing projects and their residents, it’s important to support the idea of ​​”complete neighbourhoods,” which have multiple forms of housing. Willowbrooks Apartments is a good example of this concept.

“This project is a model of how a complete community should include multiple forms of housing existing in harmony together and caring for every resident, especially the most vulnerable,” he said.

Lehrer Architects has been creating shelter for vulnerable populations for over two decades.

Six years ago, it began working with the nonprofit developer Restore Neighborhoods Los Angeles and the community bank Genesis LA to create prototypes for affordable starter homes in South LA.

He also mentioned that significant challenges lie in trying to proliferate these projects.

“Bureaucratic challenges remain extreme, if not deadly, particularly leading up to permitting and construction,” said Lehrer.

“When it comes to tackling the housing crisis in Los Angeles, innovation often stalls because there is no clear path to financing new housing models,” the studio added.

That effort evolved into the consortium RETHINK Housing, which has several sites that are built or permit-ready. The group often buys land that is overlooked by the developers and covers the cost of creating housing.

The photography is by Michael B Lehrer. Drone photographs are by Lehrer Architects.