Learnings from Collective Housing in India

In almost every Indian language, a colloquial term for “family” – ghar wale in Hindi, for example – literally translates to “the ones in (my) house”. Traditionally, Indian homes would shelter generations of a family together under one roof, forming close-knit neighborhoods of relatives and friends. The residential architecture was therefore influenced by the needs of the joint family system. Spaces for social interaction are pivotal in collective housing, apart from structures that adapt to the changing needs of each family. The nuanced relationship between culture, traditions, and architecture beautifully manifests in the spatial syntax of housing. 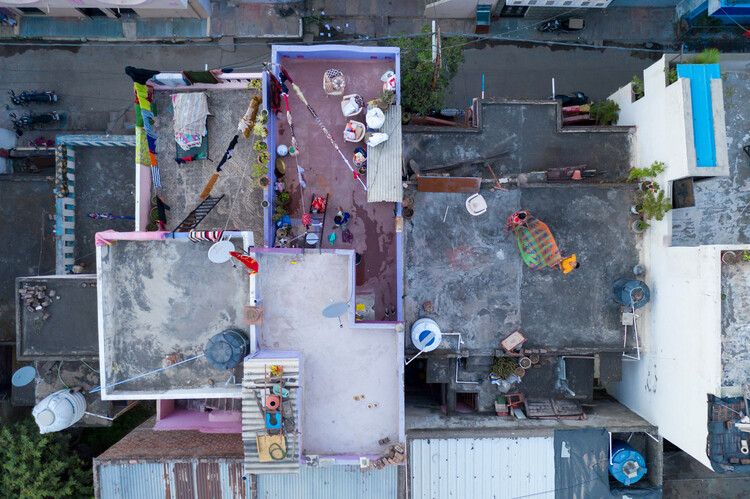 Housing in India is a complex phenomenon to understand as it is influenced by economic, social, environmental, and political factors. The country’s urban fabric is composed of informal settlements, residential colonies, and gated communities – homogenous divisions based on social and economic identity. Prior to urbanization, Indian neighborhoods were well connected and suited to people’s needs. Capitalistic motives have caused a separation between culture, community, and architecture.

Good architecture responds to the socio-cultural context of its location to promote communal living. Culture closely mimics behavioral patterns in a region that has organically evolved over decades. It offers an understanding of how people live meaningfully and operate in local systems of dependence. Architects play an important role in creating culturally informed housing. Four contemporary projects demonstrate how spatial responses to social ideals can benefit habitats:

DCOOP’s collective housing project draws inspiration from the vernacular chawl settlements found in western India. Typically, a chawl is a set of rooms strung together by a shared corridor that doubles as a functional threshold space. Such semi-open spaces are nodes for social interaction, offering refuge from the warm and humid climate.

Sublime Ordinariness responds sensitively to the cultural needs of the family and community in spite of spatial constraints. In each apartment, non-denominational multi-purpose spaces that adapt to the family’s needs have been created. In Indian homes, activities are fluid and spaces tend to be used more organically. Families of varying densities can use this space for studying sleeping, cooking, or eating.

The project seeks to establish community interaction and build a sense of belonging amongst residents. The threshold space also acts as a buffer between the indoors and outdoors. The kitchen has been positioned to overlook the corridor, enabling women – the primary homemakers – to socialize and keep an eye on their children from within the kitchen.

In a warm climate like India’s, the best place to be outdoors, and under the open sky. Courtyards are an important vernacular element in Indian housing, forming a shared space for community interaction. Located in Ahmednagar, Maharashtra the Sanjaynagar Slum Redevelopment Project houses 298 families in clusters organized around common courtyard spaces of varying sizes. In Indian houses, outdoor spaces are zones for daily chores like washing, cooking, or drying clothes, rearing domestic animals, and chatting with neighbors.

Located in Ahmednagar, Maharashtra the Sanjaynagar Slum Redevelopment Project aims to provide dignified and socially-sensitive residences for 298 families in the area. Community Design Agency designed the project to closely mimic the scale of the community’s initial settlement. Clustered settlements traditionally enhanced connectivity between people and human systems. When rehousing a community – especially of slum dwellers – it is important to keep their street-level socio-spatial connections intact to ensure the social cohesion and resilience of communities.

MVRDV’s first project in India successfully responds to the country’s socio-economic needs, while presenting a new approach to housing. With a high degree of income equality, India’s urban populace is segregated into luxurious apartments and tightly packed ghettoes. The resulting urban fabric is fragmented and absent of social cohesion among different groups in society. Future Towers tackles this issue by providing affordable housing for diverse sections of the rising population.

The vertical village holds 1,068 apartments of varying typologies to accommodate the full spectrum of India’s middle class. Apartment units ranging from 45 square meters to 450 square meters are scattered across the building to enable families with children, young couples, people living alone, and old people to mengle easily. Public courtyards and communal terraces promote social cohesion among neighbors. The building provides a breath of fresh air by standing out from the tall box-like apartments that dominate urban India.

With multi-generational living comes the need for houses to grow and modify. In India, families will add rooms, floors, or buildings to their existing homes to accommodate new family members from birth or marriage. Taking cues from the traditional incremental construction and Charles Correa’s Belapur Housing, Filipe Balestra & Sara Göransson have developed a replica strategy for affordable housing systems. The contemporary project understands the family’s need to incrementally grow their residences as funds become available. Residents are given a sense of ownership by enabling them to customize their houses as they like.