In Times of Need: Architects Stepping Up in Humanitarian Crisis

Hard times bring people together. In recent years we have seen how collective work can be a driving force to help those affected by natural or man-made disasters. After a disaster or displacement, a safe physical environment is often essential. Therefore, the need for coordination becomes a key factor in assisting people in times of need.

Architects, as “Shelter Specialists”, play an important role in creating safe and adequate environments, whether it is individual housing, public buildings, schools, or emergency tent camps. But as architect Diébédo Francis Kéré says, “When you have nothing and you want to convince your community to believe in an idea, it may happen that everybody starts working with you, but you need to keep fighting to convince them.” 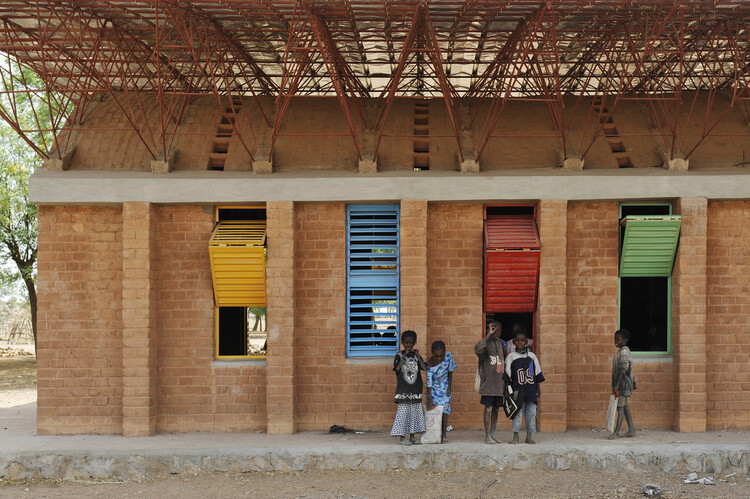 On this year’s World Humanitarian Day, we recognize the efforts of volunteers, professionals, and people affected by crisis who alleviate suffering and provide hope in times of disaster. Over the years, several architects have taken up this task such as Shigeru Ban, Diébédo Francis Kéré, Anna Heringer, and others, launching disaster relief initiatives and humanitarian actions, and their unyielding commitment and will unites collectives and communities in their efforts to overcome emergencies . We take a look at some examples of their work and their role as “Shelter Specialists” providing much-needed solutions in critical situations.

It Takes a Village: Collective Led Projects from Around the World

Renowned for his involvement in humanitarian aid, Shigeru Ban and the Voluntary Architects’ Network have been deploying a paper partition system (PPS) for emergency shelters in Ukraine and countries, designed to provide some privacy to the Ukrainian refugees.

The new urban plan and infrastructure were designed by Nigerian Consultant Architect Tosin Oshninowo, who consulted with the community to create a settlement that reflects and speaks to their culture.

Since 2017, UN-Habitat, together with Shigeru Ban Architects, Philippe Monteil and the NGO Voluntary Architects’ Network, developed several shelter typologies for a pilot neighborhood in Kalobeyei Settlement in Kenya.

This project is commissioned by the ONG Emmaüs Solidarité, as part of the attempt to provide a solution to the refugees constant arrivals. The project takes place in Ivry-sur-Seine, a suburban city, on an old water factory. This large industrial site (90000m²), no longer used, is waiting for a new urban project to come.

Djibouti is located in the Horn of Africa, a place that suffers from persistent droughts and severe scarcities. We were approached by SOS Kinderdorf to design a residential compound of 15 houses where to run their family-strengthening programs.

Emergency Architecture & Human Rights is building sand-bag schools to host Syrian and Jordanian children in Za’atari village, located just outside the Za´atari refugee camp, 10 km from the Syrian border. A vast majority of people who have been displaced from Syria are now informally living within the host community, hence they are often found without access to social security, sanitation, and educational facilities.

MASS worked with doctors, nurses, and expectant mothers at the Kasungu facility to propose a new prototype: the Maternity Waiting Village. The new design broke the singular block concept of the existing prototype into a series of smaller compounds clustered around small courtyards.

This prototype school was designed for construction within the Rohingya refugee camps, arguably the largest refugee camp in the world, in the southernmost district of Bangladesh close to the border with Myanmar. In view of government-imposed restrictions on the use of ‘permanent’ building materials like cement, brick, steel etc, the architect opted for the single most available bio-degradable material in the country: Bamboo.

Two years after the completion of Primary School, there was a demand from more than 260 children from Gando and the surrounding region to attend the school. It quickly became apparent that an extension was badly needed to service the educational needs of these students. With overwhelming support from surrounding villages, this School Extension was built using local labor and materials.

METI, Modern Education and Training Institute: METI enables children and young people in the region to take classes up to the age of 14 and provides workshops for trade-oriented professions. The idea is to provide the rural population with access to good, holistically-oriented education.

With the collaborative influence of the community, it quickly became clear that the building must provide a space to sing, create local handmade crafts and perform their famous ‘Meke’ ⁠—a traditional Fijian dance. CAUKIN Studio believes that having a safe, functioning, and beautiful space to express oneself creatively is vital to personal and community growth.

Located in remote Senegal, the new Fass School, and Teachers’ Residence is the first school in a region of over 110 villages to provide secular education alongside traditional Quranic teaching. A project completed in collaboration with the Josef and Anni Albers Foundation and Le Korsa, the school can serve up to 300 students from ages 5 through 10.

The school, founded in 2008, was in precarious conditions and at risk of flooding. In 2021, thanks to funds from the local government and international cooperation, the project became a reality, generating access to education for more than 50 children and providing a community space for 86 families.

Built by local contractors, farmers, and 16-25-year-olds over a four-month period – assisted by volunteers from the UK – the development provides education in agricultural technologies to support children and adults in the local community and facilitates opportunities for enterprise .

Note: The quoted texts are excerpts from the archived descriptions of each project, previously shared by the architects. Find more reference projects in this My ArchDaily folder created by the authors.