In London, a Venturi-Scott Brown Masterpiece Is Threatened

Despite its dazzling collection of masterpieces, London’s National Gallery has been cursed with a series of ill-advised architectural schemes over its two-century existence. Only once have its leaders made a truly inspired and visionary choice: in the mid-1980s, the gallery held a competition, won by Venturi, Rauch and Scott Brown (VRSB) of Philadelphia, to build a special collections building.

The addition was constructed from 1988 to 1991, using funds donated by the Sainsbury family as a gift to the nation and was immediately hailed as one of the finest buildings of its type erected in the 20th century. It has remained popular with Londoners and has served well as an expansion of William Wilkins’s undistinguished classical building ever since. Experts on the work of Robert Venturi, John Rauch, and Denise Scott Brown consider it one of their masterpieces. Apparently, the National Gallery has a different opinion. 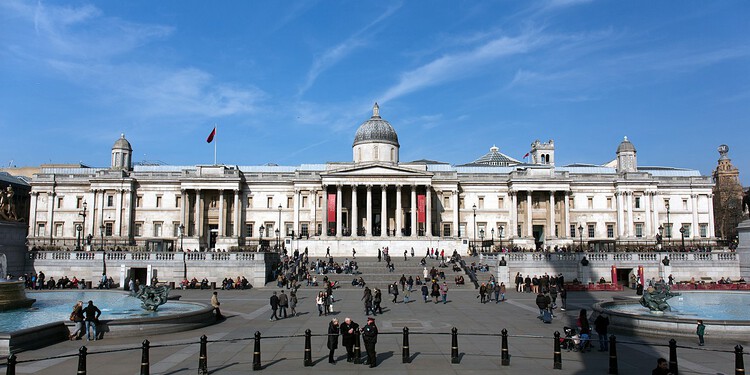 The main problem here is one of poor master planning. The original 1832 building was reviled from the moment it opened, and it never functioned properly. Several additions in the second half of the 19th century improved things somewhat, but were inadequate to solve the circulation problem—a axial entrance sequence could not distribute visitors along the massive length of the original gallery wings. Today, the monumental exterior that worked well for nondisabled visitors cannot accommodate crowds crowds wishing to see different parts of the museum. Even a ground floor foyer designed in 2003–04 by Dixon Jones could not handle the traffic. It is tiny and located to the east of EM Barry’s cross-shaped interior staircase. A better solution would have demolished that staircase and created a large entrance hall like that of Richard Morris Hunt’s Metropolitan Museum in New York, or the beautiful but also threatened stair hall in the New York Public Library at 42nd Street, with a coordinated exterior staircase. Both New York buildings offer valuable lessons here. Thomas Hoving, the Met’s director during the 1960s, saw the clear need for a better staircase and built the current one to handle larger crowds. It is now one of the most popular public spaces in Manhattan.

Britain’s National Gallery has not been so forward thinking. Though the street in front of the huge building is now closed to traffic, effectively making it part of the square, no one appears to have suggested a new entrance stair or pavilion that might handle current crowds. (The administration would not hire John Simpson, who provided a magnificent new entrance to the Queen’s Galleries at Kensington Palace.) NG200, the euphemism for a “futureproofing” master plan issued by the gallery last year, avoids tampering with “listed” areas of the vast museum and instead targets small areas in the Sainsbury Wing and other ancillary portions of the building—hardly the kind of “visionary” approach that might be warranted on the 200th anniversary of its founding. Alas, recent administrators have had much like other museum directors, simply waiting for the next generation to persistent solve problems. Like COVID, there seems to be a virus going around among leaders of cultural institutions that prevents them from exercising any bold leadership.

The Sainsbury “wing” was never intended to be the main entrance to the huge museum, only a means of ascending to a suite of galleries built for the purpose of showing specific Renaissance masterpieces, such as Leonardo’s unfinished Madonna of the Rocks. In fact, it is expressly dissociated with the large main wings and placed at a slight angle to Trafalgar Square, the only portion of the museum so disposed. The current museum director, Gabriele Finaldi, is convinced that the habits of Londoners who like the “new wing” better than the old should be seen as a reason to shift the main entrance there, but he is sadly mistaken. VRSB created a pinch point—a distinctive rotunda—at the joint between the two buildings, a space that prevents bringing large numbers of patrons through what is clearly a side entrance to the main galleries. A competent museum architect would see this and advise against any plan for changing the circulation, but unfortunately the National Gallery did not hire such a professional following a 2021 search; Instead, it got Selldorf Architects.

Annabelle Selldorf emerged following her renovation of Ronald Lauder’s Manhattan townhouse—it became the popular Neue Gallery for the display of his collection of Viennese modern works—as the “go-to” architect for fashion-conscious art museums in the 1990s. Her light touch in creating galleries in a magnificent Carrère & Hastings building was justly praised, but she had a relatively easy problem to solve there. Trained as a modernist (she is German but attended Syracuse and a master’s program in Europe), she came to New York and set her sights on an underserved market for adaptive-reuse specialists, working that many prominent Manhattan architects saw as beneath them. However, subsequent commissions for renovations or additions to important historic buildings have not justified her elevation to starchitect status.

Selldorf has become something of a specialist in desecrating art museums associated with Robert Venturi and his partners, and the work of Carrère & Hastings. When La Jolla’s Museum of Contemporary Art needed a “facelift” in 2018, she promptly suggested removing all of the work completed only two decades before by VRSB. Her bland, generically modernist expansion not only denied visitors the experience of whimsy and delight in the previous entry sequence, it deflated the impact of Irving Gill’s masterful original façade. Her brief specified the need for expanded gallery space, not a new entrance. The result is more than disappointing—it is disastrous. Yet it seems to have enhanced her reputation.

Selldorf recently, amid widespread condemnation by New York preservationists, demolished John Barrington Bayley’s entrance pavilion and John Russell Pope’s Fountain Court at the Frick Museum to create her ugly and forgettable “expansion” of the popular museum—a permanent collection that needed no expansion whatsoever. Such pandering to art mavens, oligarchs, and museum curators intent on creating “facelifts” for their failing museums has given her a certain cachet in the art world. Selldorf has emerged as the safest choice among a few modernist firms doing museum work. As Rowan Moore wrote recently in The Guardian, hers “is an architecture of near emptiness, the default style of international art-world good taste.”

In fact, the ground floor renovation of VRSB’s lively Sainsbury hall looks a lot like third-rate interior for a suburban office park. An S-curved balcony with plain glass balustrades is supported by corny wood-sheathed pilotis, fattened to invoke the wonderful Venturi columns above. Instead of the color that was suggested by the original architects to enliven the gray staircase, Selldorf has painted everything in eggshell—certainly safe enough for an HGTV makeover, but hardly colorful. This is a Wimpyburger that should have been a Big Mac, let alone a stylish White Towers hamburger from the 1930s. The kind of good taste that Selldorf cooks up should come with a heavy dose of sriracha sauce, as there is no beef in the bun. Not even any black beans.

Though the National Gallery suggests that the designs will be vetted by “the public” before being approved, and Selldorf has purportedly “reached out” to Denise Scott Brown for comments, this looks like a whitewash with some gaslighting to brighten the shine. Though he died in 2018, Venturi continues to be the whipping boy for cultural watchdogs who want Postmodernism relegated to the dustbin of bogus history. As I have written before on Common Edge, there is no excuse for stupid, ill-informed and destructive ideas from our “best and brightest” contemporary architects. The best architects, no matter their style, race, or gender, ought to be working to preserve masterpieces like the Sainsbury Wing from ill-advised administrative ploys to “update” their very durable features and protect them from sycophants like Dottore Finaldi. As a historic preservation specialist, I am embarrassed for my colleagues, most of whom struggle to save great buildings no matter what their age or style. Selldorf does the equivalent of changing the ball-and-claw feet and carving her initials in the top of a priceless Chippendale table.