How Copenhagen is Designed for Delight

According to the World Happiness Report, Denmark has continually topped the survey of happiest countries for years. Copenhagen, the capital of Denmark, is known for its brightly colored waterfront buildings and radical contemporary architecture, both reflecting the joyful ethos of the city. The maritime metropolis is an urban designer’s favorite case study with its carbon-neutral infrastructure, pedestrian and bike-friendliness, and thriving public realm. Danish designers have cracked the code to build happier cities, leaving plenty of models to learn from. 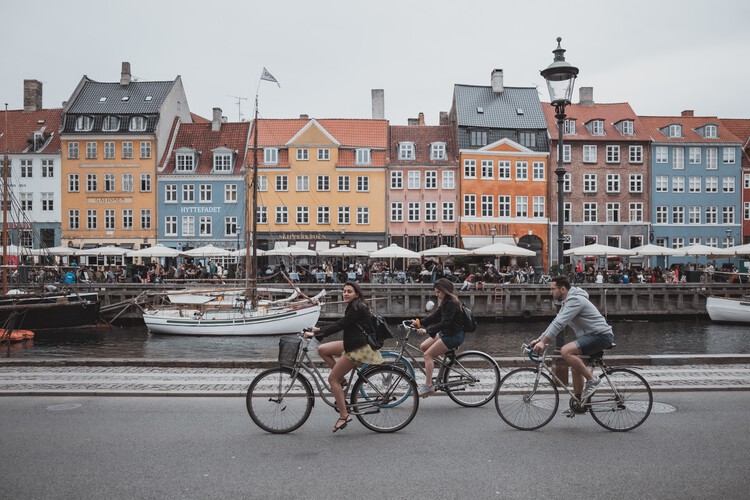 Happiness is a feeling that results from enjoyment, activity, and companionship. Harvard psychologist Daniel Gilbert suggests that happiness is governed by three decisions in life – where to live, what to do, and who to do it with. The first question highlights the impact of physical surroundings on our content and wellbeing. Architecturally, Copenhagen must be doing something right to earn its ‘happy city’ crown.

The Danish design philosophy can be summarized by a native word hygge which roughly translates to “an atmosphere that cultivates comfort, contentment, and well-being”. Copenhagen’s architecture and urban spaces noticeably embody this philosophy by supporting urban play, activity, and recreation. Danish architect Bjarke Ingles’ designs are led by a quest for hedonism, placing pleasure and enjoyment at the center of his work. Celebrated Danish urban designer Jan Gehl insists on building cities to make people happy, rather than automobiles. Apart from playgrounds, Copenhagen features multiple social hubs centered around multigenerational recreation.

Opportunities for fun are enmeshed in the city through playful public spaces and urban interventions designed to surprise. A vast number of examples demonstrate how Copenhagen prioritizes joy, making urban life imaginative and unanticipated:

CopenHill is a perfect example of Bjarkle Ingles’ doctrine called Hedonistic Sustainability. The design reimagines a waste-to-energy plant as a space for sports and play. A rooftop urban park blankets the industrial building with a ski slope, a lush hiking trail, and a climbing wall. The space also features a bar and CrossFit gym with magnificent views of the city.

The design turns notions around waste and pollution into a positive experience, inviting recreation buffs to a prominently industrial neighborhood. Through its program and massing, CopenHill extends itself as a vivacious component of Copenhagen, serving as a unique landmark in the flat-terrained city.

The Harbor Bath is an accessible urban space that forms the cultural and social heart of Copenhagen. Transforming an industrial port into a city square, the public swimming pool evokes a free-beach attitude serving as an extension of a nearby park and the harbor. The project is intended for leisure, exercise, and socializing, offering people a site for swimming, sunbathing, or enjoying city views.

Designed by BIG and JDS, the Harbor Bath focuses on accessibility, safety, and programmatic flexibility. A lifeguard station is centrally positioned to allow the supervision of all zones at all times. Swimming pools are artistically cut out of the deck and sharp angled steps punctuate the space to invite explorative play. Through the project, Copenhagen prioritizes biophilic interaction nodes in the city thereby enhancing the well-being of its citizens.

A similar design solution to CopenHill, JAJA Architects has turned a parking structure into a vibrant public space. The building features a fully equipped playground on its roof where children and adults can enjoy a jubilant atmosphere. Contesting the idea of ​​monofunctional structures, the competition project lures people to the rooftop via an external staircase. As one climbs up, the railing transforms into swings, ball cages, and jungle gyms, blurring the boundaries between function and play. Park ‘n’ Play has an intergenerational appeal, inviting people of all ages to the active rooftop.

Superkilen Park successfully employs recreation and play as a binding agent for an ethnically diverse community. Located in the most socially challenged neighborhood in Copenhagen, the half-mile-long urban space incorporates objects from 60 different nations to conceive a collective identity. The design is a collaboration between Topotek 1, BIG Architects, and Superflex who fused their expertise in architecture, landscape design, and art.

Play – a condition where the same rules apply to all – facilitates the intermingling of contrastive people on an equitable ground. A network of play areas fosters interaction between children and their guardians of scattered communities in the neighborhood. The cultural pieces speckled across the urban framework are left open for interpretation, unveiling possibilities for spontaneous movement and creative play.

The Danish-American firm MLRP designed a grand gesture of delight in Copenhagen’s Interactive Playground Project. Morphing a graffiti-plagued building, the facility was redesigned to host kindergarten classes in the neighborhood. Children and passers-by are surprised by a large funhouse mirror on the facade, bringing a sense of humor to daily routines. The gable roof structure warps perspectives and reflections of its surrounding park, playground, and activity. The building constantly draws people, especially children, who discover a new image with every interaction.

Through these examples, it becomes clear that along with architecture, something deeper provokes a sense of happiness. Joy is found through sharing experiences and spaces with others, collectively celebrating the spontaneity and wonders of human life. The power of the built environment to elicit an emotional response from people is impactful, and design lives as a tool for inspiring the human spirit. Copenhagen demonstrates that architecture in harmonious combinations can create beautiful experiences that translate into happiness.