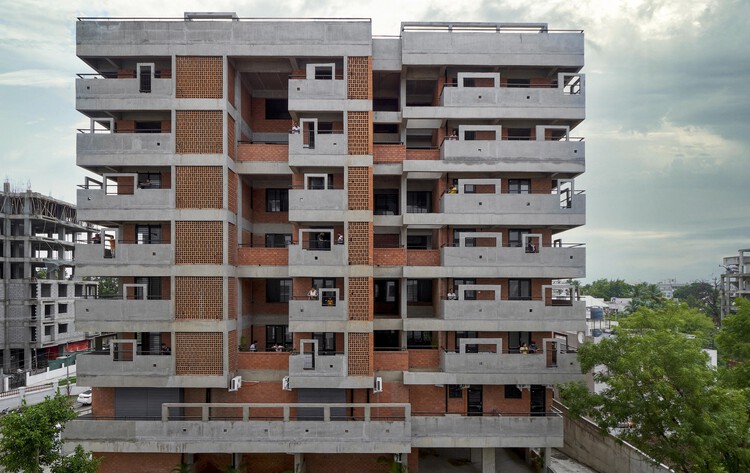 Background and Design Brief – Initially, this proposed land (plot) was going to have an approx. 10-to-11-story tower with 4 mid-size residential units per floor and some commercial area on the ground. Some how that idea got stalled and one of the developers who were willing to undertake the project, Mr. Naresh Bhadakwade, came to ask for an alternative solution that would be ‘aesthetically different’ (?), sustainable, slightly low rise as compared to the earlier one, but still consuming the similar FSI to keep the proposal commercially viable. with these inputs, the design process started…

Architectural Planning – Compared to the previous idea of ​​4 identical Tenements per floor, we agreed upon a design having 6 tenements on one floor, that too with a variety of sizes and orientations. This means, generally a simple Mirror-type of symmetry is found in Residential Apartment buildings in India where mostly a similar kind of customer base is focused upon. Meaning, a three-bedroom units (3BHK) building may not generally offer one-bedroom (1 BHK) type of tenements and vise-versa. This phenomenon helps promote an unfair social division through architecture (isolated neighbourhoods). We tried to challenge this concept and tried to offer all three general types of sizes on one single floor – a one-bedroom tenement, two bedroom tenement, and a three-bedroom tenement too. Here the intention was to offer the customers a built environment where the tenement sizes and their respective pricing would be different, but the social status and the feeling of joy and proud ownership would be the same among its inhabitants. This decision not only gave a more inclusive character to the architectural planning but also proved to be efficient in terms of the utilization of the full built-up potential of the plot, especially considering its peculiar angular shape.

Rethinking the sustainability and materiality in housing – Once the planning and structural grid got confirmed, there was an effort to search for the aesthetic language that would be something fresh in its visual appeal (considering the local context), in its materiality, and construction methodology. We were certainly on what we don’t want – glass railings, synthetic material claddings, floor-to-floor ‘copy-paste’ looks, etc….instead of all this, our effort was to highlight the eclectic character of the floorplan in the building’s external appearance also, boldly expressing the bare RCC frame structure, and unveiling the subtle beauty and aesthetic potential of the bricks and form-finish concrete through a fresh Visual Composition.

In Residential Buildings in India, generally, we create an RCC structure, build internal walls with bricks and then cover it all with plaster, and then apply paint. This ‘standardized practice’ was our topic of debate and made us inclined towards the idea of ​​making the RCC frame and brick walls play not just a structural role but also an aesthetical role simultaneously. In our state- Maharashtra- all our mountain forts are made in Basalt stone or traditional ‘WADAs’ (Houses) built in red bricks/stone used to depict this amalgamation of Aesthetics of The Structure and Aesthetics of the Material so beautifully and sustainably since ages; Here, the construction process and its aesthetic outcome becomes a simultaneous phenomenon. This is an inherently sustainable thought as we save a lot on the embodied energy and process required for the application and refinement of synthetic materials and surfaces. Cutting down on such (unnecessary?) processes and materials, and acquainting the user’s eye for such raw, bare, less processed ‘aesthetics’ would certainly be considered as an insightful sustainable approach towards architecture in the future. Just the way High-Processed Food is Harmful to the Human Body, our Visual obsession and approval for such Highly Processed and Artificial Surfaces and materials in the name of Architectural Beauty and modernity might not be considered a Sustainable approach, in the long term. (This, although a personal Observation, one sincerely felt the need to mention it.)

Coming back to the project, For the material pallet, less is more was our motorcycle. The cavity brick masonry was used both for its aesthetic appearance and its good insulation quality. The second important element was the use of form-finish concrete. Along with these two materials – concrete and brick – the peripheral balconies and double-height terraces also play an equally important functional and aesthetic role. The parapet wall is conceived not just as a safety barrier but as a ‘canvas’ that would offer a variety of views and pause points through numerous combinations of visually delicate concrete frames. The MS railing pipe on top that runs through these frames and parapet walls is the level constant for the viewing eye. It’s a kind of eye stabilizer that corrects and balances the rawness and imperfections of these two materials.

Floor-wise, there are no repeat sets of combinations of the concrete frames. This ‘Aesthetics’ of chaotic (Random) order’ (like the heritage Streets of the old markets- ‘Bazaars’ in India) makes the building façade Visually engaging and curious to the viewer’s eye. When the residents would be living their lives in those spaces, the façade would then become a ‘live screen’ of their life observed across the street. This project, right from the planning to its realization, was a long journey of efforts, ups and downs, errors, and lessons learned. The construction has also witnessed the ‘great’ corona pandemic and its consequential lockdowns. Frankly speaking, considering the local context, the Market’s aesthetic taste, and its financial limitations, this was experimentally ambitious, but yes, a sincere, humble, and curious attempt to present a different visual portrait of a Residential housing Apartment in India. The core idea and imagery of this project contain some references to the past, but it tries to express those in a contemporary Architectural Language.