Hopkins Architects has reused elements of a 1980s office block to create the commercial 100 Liverpool Street building in London, which is shortlisted for this year’s RIBA Stirling Prize.

Commissioned by British Land, the project was developed by Hopkins Architects in collaboration with local firm Universal Design Studios, with the aim of creating a contemporary building with work, retail and restaurant spaces.

The 100 Liverpool Street project is one of six vying to win this year’s RIBA Stirling Prize.

On top of transforming a dated building, the project also forms a gateway to the recently reinvigorated retail Broadgate Estate – an office and destination beside Liverpool Street Station.

“The brief asked for a high quality, modern and flexible commercial office building that responded to the modern 24/7 lifestyle,” Hopkins Architects told Dezeen.

“The building was to be sustainable as possible with a significant increase to the retail and restaurant offer that enhanced the public realm and that created an appropriate gateway to the revamped Broadgate Estate.”

The original 100 Liverpool Street building was built in the 1980s by Arup Associates in response to the booming banking industry.

It had a stone-clad facade and deep-plan floors – measuring 40 meters deep at the narrowest point – that restricted outward views and natural daylight inside.

The updated building comprises 48,000 square meters of flexible office spaces on its upper floors, which are raised on a podium containing restaurants and retail spaces.

Visually separating the public spaces from the offices is a collonaded walkway that wraps around the building.

Rather than demolishing the original structure, Hopkins Architects opted to retain and refurbish a large proportion of it.

All of the original foundations have been preserved alongside half of the superstructure, allowing the studio to minimise material consumption while creating “what feels like a new building”.

“The design options were either to demolish or to undertake a significant refurbishment,” the studio explained.

“It was necessary to replace 50 per cent of the superstructure in order to reorganise the internal layout of the building to make it work better.”

To reduce the deep plan, Hopkins Architects moved the building cores away from the facade, where they were originally placed. This has helped to reduce the size of the office spaces inside, making them more flexible and maximizing natural light.

An atrium with a statement staircase was also added to the heart of the building to maximise daylight and to introduce an “orientation space”.

In an effort to limit the carbon footprint of the new elements of the building, the studio avoided the use of concrete where possible. The new superstructure is made predominantly from steel and composite steel frames.

As a result, the embodied carbon of the project is “significantly below current targets for new build office buildings”, the studio claims.

This was calculated using the Whole Life Carbon assessment tool from the Royal Institution of Chartered Surveyors and measured against the LETI Embodied Carbon Primer report produced in 2020.

The building is also “extremely efficient” in terms of its energy use due to the size of its facade compared to the depth of the building, according to Hopkins Architects.

“The deep plan form of the building means that the facade area is extremely low for the accommodation provided,” the practice explained.

“This ratio, known as the form factor, is a key driver of efficiency and therefore energy-in-use on every project, and on 100 Liverpool Street it is extremely efficient.”

As part of the project, Hopkins Architects replaced the original stone facade with a lightweight system composed of aluminum and glass that appears to be almost entirely transparent.

However, approximately 40 per cent of the facade is opaque and lined with insulation to help minimise solar gain and heat loss.

By reducing the weight of the facade, the studio was able to extend the building’s floor slabs and introduce three more storeys without updating the foundations.

The floor slabs were extended to soften the form of the building, creating “a more sinuous facade that responded to the flow of people”, the studio said.

In contrast, the top five levels of the building were stepped back from the edge to form planted terraces and outdoor spaces, all with step-free access. 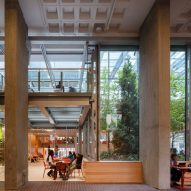 The interior design for the project was developed in collaboration with London practice Universal Design Studio and is focused on the building’s entrance and second-floor lobby.

Universal Design Studio’s aim for these areas was “to create active spaces, which are inviting and encourage use”.

In the main double-height lobby, walls are lined with concrete panels that form a backdrop to leather seating and shelving, and circulatory routes are mapped out in terrazzo flooring.

Above, the second-floor lobby is accessed by an escalator in the atrium and is lined with whitewashed oak paneling.

Different seating styles feature throughout the two lobbies, allowing them to be used for everything from informal meetings to team collaborations.

A highlight of the interior is a site-specific ceramic artwork by local artist Lubna Chowdhari, which references the history of the site and its railway landscape.

The 100 Liverpool Street project is one of six buildings shortlisted for this year’s Stirling Prize, which will all be featured on Dezeen ahead of the winning project being revealed next week at RIBA’s London headquarters.

Although Hopkins Architects reused the existing structure, ACAN argued that it would have been more sustainable to avoid tearing down any part of the original building.

The photography is courtesy of Hopkins Architects.