The criticism over Selldorf Architects’ redesign of Robert Venturi and Denise Scott Brown’s Sainsbury Wing at the National Gallery is the latest in a long line of controversies surrounding the building, writes Catherine Slessor.

For better or worse, the National Gallery has always aroused strong emotions. William IV thought the original edifice, designed by William Wilkins, was a “nasty little pokey hole”, while Thackeray called it “a little gin shop of a building”. The distinguished architectural historian John Summerson once compared to Wilkins’ arrangement of a dome and two diminutive turrets on its roofline to “the clock and vases on a mantelpiece, only less useful”.

By the time the then Prince Charles came to mushily eulogise it in 1984 as “a much-loved and elegant friend”, decrying the competition-winning “carbuncle” that Ahrends Burton & Koralek (ABK) proposed, public sentiment might have shifted from historic opprobrium. However, the consensus remains that it is neither Wilkins’, nor Victorian neoclassicism’s, finest hour.

So in many respects, the intensifying brouhaha surrounding proposals to remodel parts of the National Gallery’s Sainsbury Wing, designed by Venturi and Scott Brown following the regal defenestration of ABK, comes as no surprise.

To date, former RIBA Journal editor Hugh Pearman has been leading the charge, tweeting: “Oh my goodness, the phone rang and it was Denise Scott Brown! A half-hour chat, total honor. At the end she issued a heartfelt request – PLEASE can everyone here who cares create a STORM of protest about the proposed changes to her and Bob’s National Gallery extension?”

Pearman is supported by fellow critic Rowan Moore, who has written: “The problem is that the proposed new work is something else altogether to Venturi and Scott Brown’s playfulness and personality.”

And the Twentieth Century Society (of which, to declare an interest, I am currently president) has also raised “grave concern”, noting: “It is testament to the building’s quality and longevity that it accepts adaptation and alteration, but this must be achieved by working in the spirit of the original design, rather than introducing contradictory architectural values.”

Officially, Scott Brown has remained tight-lipped about the plans, by German-born (but New York-based) Annabelle Selldorf, whose oeuvre has been unflatteringly described as “facelifts for failing museums”. Selldorf’s ongoing expansion of the Frick Collection in New York is typical, tempering beloved historical quirks with a soporifically generic late modernism. As Moore put it, hers “is an architecture of near-emptiness, the default style of international art-world good taste”.

More specifically, she also has previous form in tampering with Venturi and Scott Brown’s buildings, removing a characterful colonnade and entrance courtyard at San Diego’s Museum of Contemporary Art in order to facilitate an ambitious expansion programme, a move which provoked a degree of pearl-clutching among the Pomo establishment. Robert Stern, Terry Farrell and Charles Jencks were among those who petitioned against the project, ultimately unsuccessfully.

It all conspires to compromise the Pomo gloom

History now seems to be repeating itself at the Sainsbury Wing. The focus of Selldorf’s remodeling is the entrance hall, which the project brief stipulated should become the principal point of entry to the National Gallery, despite never originally being envisaged as such.

This programatic shift will have the effect of transforming the atmospheric “undercroft” space, described in the building’s Grade I listing as “designed to suggest the crypt of an Italian church, or basement level of a Palladian villa”, into something more like a bustling , bland, airport lounge. Existing dark glass will be replaced by clear glazing, chunky columns thinned out and part of the entrance hall ceiling cut away.

It all conspires to compromise the Pomo gloom, out of which, as Venturi and Scott Brown conceived it, visitors visually and metaphorically ascend, up the promenading, papal staircase, incised with artists’ names, to bask in top-lit galleries and savour the dazzling hues of Renaissance masterpieces, including the famous 14th-century Wilton Diptych, with its angelic hoards clad in robes of crushed lapis lazuli.

To be clear, the galleries will be unaffected. Selldorf’s scheme, which ended off competition from old art museum hand David Chipperfield, as well as Caruso St John and Witherford Watson Mann, is driven more by practicalities, as the National Gallery adjusts to a changed climate of museum-going.

Among these is the prescription that visitors’ bags now require to be searched, something obviously not factored into Scott Brown’s original calculations. And the responsibility of public-facing organizations to safeguard their visitors becomes more onerous next year with the introduction of “protect duty” legislation, evolved in response to the 2017 terrorist attack on Manchester Arena.

This need for tighter security has had a palpable effect on the public’s relationship with museum buildings. No longer is it possible simply to waltz into the nation’s repositories of culture. The British Museum currently boasts a couple of white plastic “security tents” at its front and back doors. And the spectacle of visitors glumly straggling along the side of the Sainsbury Wing, waiting in all weathers, has been a fact of life for some time now.

So as the National Gallery’s bicentenary looms in 2024, the impetus to rationalise the sequence of entry to create a “world-class welcome”, while also adding a new research center, seems, in theory, to be a logical ambition, driven by director Gabriele Finaldi. 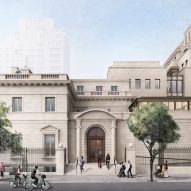 However, hovering perpetually over British architectural discourse like a baleful dirigible is the National Gallery’s especially tortuous recent history. Who can forget how the original 1982 competition, won fairly by ABK after shortlisted schemes were put to a public vote, was effectively derailed by the Prince of Wales?

His now infamous “carbuncle” speech, the worst present imaginable for the RIBA’s 150th birthday, inaugurated HRH’s pinchant for built environment meddling, fatally torpedoed ABK, and marked a turning point in the relationship between the architectural profession and the public.

In the intervening stunned hiatus, supermarket largesse rode to the rescue, with the Sainsbury family stumping up £50 million to fund a new National Gallery extension, this time without the need for commercial office space to generate income, which radically simplified the brief. Stepping into this exquisitely British minefield, Venturi and Scott Brown ultimately prevailed in a second, limited competition.

While it represented a high-water mark for Pomo in terms of establishment acceptance, it’s fair to say that the Sainsbury Wing is not Venturi and Scott Brown’s most original work, derivative of their Seattle Art Museum, which has a similar promenading staircase and corner entrance ornamented by neo-Egyptian colonnettes.

Tainted, to some extent, by the controversy of its inception, and the sense that Venturi and Scott Brown were on cruise control, the building was not entirely well received at the time. Moore originally described it as “a picturesque piece of mediocre slime” in a 1991 issue of the Architectural Review, but recanted this youthful rush to judgment in a recent Observer column. Paradoxically, as times and opinions change, the Sainsbury Wing has now assumed the historical status of cherished relic, with its former critics lining up to defend it.

How all this will play out remains to be seen. Westminster planners are currently perusing Selldorf’s proposals, with objects from Venturi and Scott Brown fanboys and girls doubtless stacking up. Perhaps it has the makings of going all the way to the desk of whichever cursed functionary will inherit Michael Gove’s built environment mantle in the new Conservative administration. In the meantime, fasten your seat belts. It could be a bumpy autumn.

Catherine Slessor is an architecture editor, writer and critic. She is the architectural president of the charity of the 20th Century Society and former editor of UK magazine The Architectural Review.