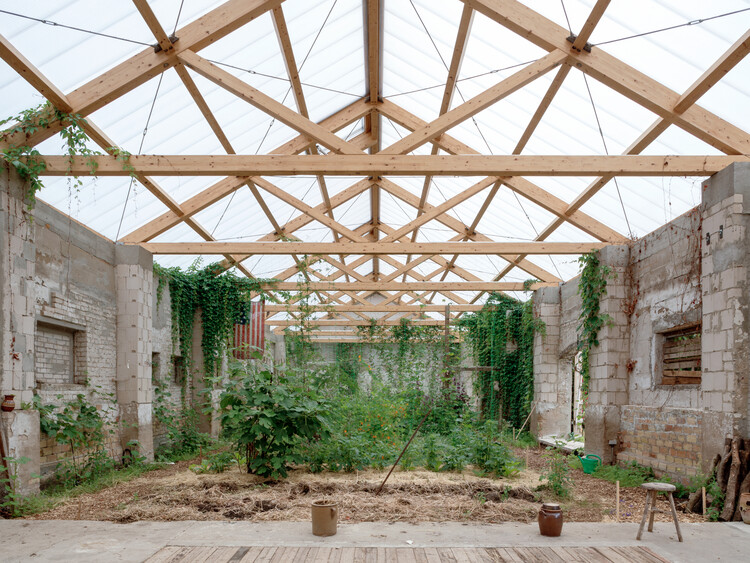 Text description provided by the architects. At the intersection of art and nature, Gutshof Güldenhof is Berlin-based architecture studio Heim Balp Architekten`s latest completion conceived for and in close collaboration with Vietnamese-born Danish conceptual artist Danh Vo (b.1975). Located in the rural town of Stechlin, Brandenburg, in the vicinity of Berlin, the project saw the transformation of an abandoned farming complex into a thriving and active center for art, sustainable living, and social interaction.

Reflecting both the studio and the artist’s clear understanding of space as inherently social, Heim Balp reappropriated the existing construction, developing its full potential and embedding it in its natural surroundings. The resulting design is a multifunctional, communal space residential, cultural, and work facilities, ultimately forging a versatile, sustainable, and inherently livable environment.

Working from a former livestock farm with a set of stone stables and barns that had remained intact since the 18th century, the architects undertook a series of architectural interventions on the existing buildings, creating exterior and interior spaces for a range of uses spread across over 5,000 m2. Initiated in 2017 and completed this year, the complex, where Danh Vo mainly resides and works alongside his collaborators, comprises an art studio; exhibition, and art storage spaces; metal, ceramic, and wood workshops; as well as apartments, communal areas, and farming spaces – allowing a community of up to 20 to be present on-site at any given time.

At the core of the complex is a mixed-use three-story building. Entirely run down when the project started, it acted as a two-level residence for the farmworkers, with low ceilings and an only partly used upper floor. Heim Balp revisited the existing structure by connecting multiple spaces to create a holistic ensemble rife for social and cultural exchange. Keeping only the walls, the roof and facades were entirely redone using congregated metal, similar to that used for rural structures in the area throughout the 20th century.

The facade was repainted in black with the intention of exposing the new interventions in the space, contrasting them with the existing aesthetics rather than concealing them, one of Heim Balp’s signature approaches to restoration. Widely transformed, the exterior front features new openings in addition to the existing ones, creating a free, abstract composition on the black canvas that is the newly colored plastered facade.

The beating heart of the edifice is the kitchen, where the inhabitants gather throughout the day to cook and eat – a central aspect of life at Güldenhof. Adjacent to it, the laundry, reading, and entry rooms gather in a new volume extending from the building to the outside, clad with metal and translucent panels on a wooden core. In the west wing, the second floor was demolished to create a vast high ceiling living and studio space where a traditional multi-purpose oven, typically used in rural Russia, was installed. The 4 x 5-meter structure is at the center of the room with a central chimney and several platforms investing the vast space around it. Used as a heating system for the house as well as food and water heating, it also acts as a place to rest. The interior design of the space mirrors Vo’s approach to art: the many objects, plants, rugs that fill the room are a conscious form of storytelling.

The ground floor of the east wing acts as the residential side of the complex, encompassing bedrooms, a common bathroom, and a small library. On the first floor is an expansive studio connected to the second floor of the main house by a volume that echoes that extends from the central wing’s access. In a large plywood cladded room, the studio houses workstations as well as two developed staircases. The first is a round concrete stair within a square opening of the floor deck leading to the ground floor, also used for storing timber used in the ovens throughout the complex. The second is a 3-meter-wide wooden stair leading to the upper part of the studio, also used as a display for objects, books and plants. Ultimately, the Main House is thought of as both a functional space and the environment for the artist to express a distinct conception of space as rooted in a narrative, where art, nature, and history coexist. For the interior as for the exterior, the architecture of the complex, a collage of spaces molded by the artist, becomes the backdrop for the production and display of art.

A few meters away, the East Barn is a two-storey stone and brick structure towered by a preserved timber roof. The ground floor has been converted into a humidity-controlled art storage and archive, with a section for paper and film – the original purpose of the complex in response to scarce storage spaces in Berlin. On the first floor, a large exhibition space with a 10-meter-high ceiling is divided into two areas, both kept purposefully empty for temporary installations and performances. The West Barn is an authentic stone structure with timber roofing, kept in its original condition. The space is used as a timber and metal storage space to support the workshops appended onto it, which oversee the year- round production and shipping of preparation artworks produced by Vo and his studio team.

Central to the complex, the North Stables host the community’s extensive sustainable farming and gardening activities. Solely the exterior walls have been retained, while the roof and floor were removed to transform the space into an indoor greenhouse with a new timber and translucent polycarbonate panel roofing. While it supports the residents during the winter, it is also a place nourished by and cultivated through art. A small, paved surface acts as an event space where music, performances, and meals can take place when Güldenhof opens to the public. Gutshof Güldenhof is the second extensive art-related project undertaken by Heim Balp Architekten, following their ongoing redevelopment of the early 20th-century Lindower Straße factory buildings in Berlin into a creative hub with artist studios; workshops; exhibition spaces; and apartments, to be completed in 2022.