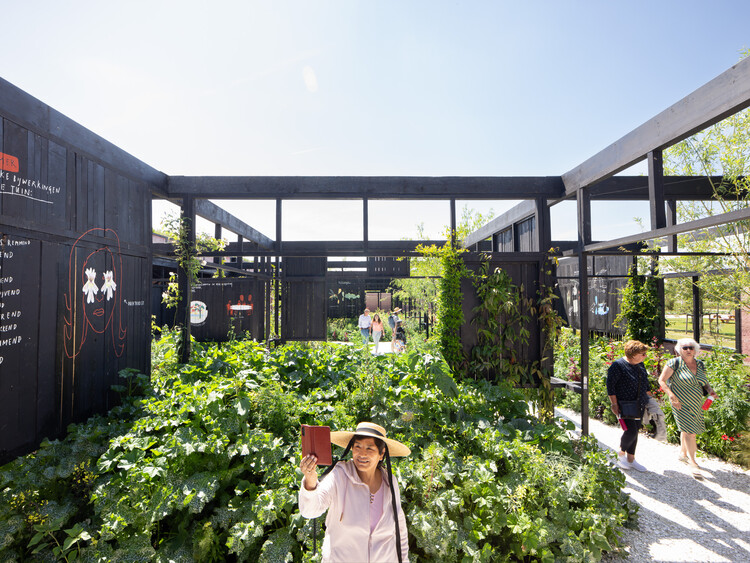 Text description provided by the architects. The Voice of Urban Nature is built from 100% local and biobased building materials and composed of a combination of wooden building modules filled with hemp-lime and robust structural columns. The raw materials were sourced as locally as possible in the vicinity of Almere and Amsterdam. All timber is sourced from regional forests, harvested for the maintenance of nature reserves, or second-hand wood from demolition projects in Amsterdam and Almere. This involved labor-intensive processes to remove thousands of nails and staples from reclaimed timber.

Additionally, the striking black coating for the wood is made from flax oil grown in the fields around Schiphol Airport. Raw materials for the hempcrete include hemp fibers grown in Almere, and a pink pigment obtained from madder plants grown in Brabant. This approach towards local materials meant it was essential for the builders of the pavilion, FictionFactory, to be involved from the start of the design process. They began to harvest the necessary materials before the final design was completed, making sure the 100% local, biobased & demountable principle has been implemented without compromise in all details

The metropolitan area of ​​Amsterdam and Almere has trillions of inhabitants: people, animals, plants, trees, and microbes. How can we organize our cities in such a way that it provides for the necessities of life for all these inhabitants? In the Amsterdam-Almere pavilion at the Floriade Expo, 2022 everyone gets a voice in a garden full of encounters.

On arrival, the pavilion appears to be very solid with only two openings, but when inside you find yourself in an airy walled garden. A short animation introduces you to the urban nature of Amsterdam and Almere. Garden, exhibition and building meaner through each other: organically shaped garden islands are playfully framed by open wooden frames. Several panels in these black frames display quirky and somewhat prickly drawings by Paul Faassen, together forming a visual manifesto. Wandering through the landscape you come across QR codes that link to audio encounters with inspiring people, and members of other species from Amsterdam and Almere. They explain how you can commit to a greener future.

The 6 garden islands show the potential richness of urban nature. Each small biotope zooms in on a different theme. The garden of life and death shows the entanglement between plants, soil life and fungal culture. In the pioneer garden all kinds of pioneer plants grow among the building rubble, such as evening primrose, yarrow, and wild carrot. The garden of building and living contains crops that can be used by humans for building materials, but also reveals how urban nature provides living space for animals. In an explosion of color and scent, you will discover familiar and lesser-known edible crops such as sweet potato or elephant ear in the food garden. The garden continues on the roof of the pavilion, which

is inaccessible to humans and instead a place where birds and winged insects can nest in nectar plants such as yellow mustard and incarnate clover.

With The Voice of Urban Nature, the designers want to show the conservative construction world that a sustainable circular approach to architecture can lead to robust, contemporary and spectacular designs. Where biobased materials are often gray or beige, the hemp-lime walls are innovatively colored pink and contrasted with the black wood.

Furthermore, the material choices and construction techniques intend to demonstrate how both municipalities are taking the necessary steps towards an agricultural and construction transition. In the twentieth century, both sectors were mainly focused on increasing scale and increasing production, in order to accommodate and feed the growing world population. It is now clear that there are enormous disadvantages: Biodiversity is under pressure worldwide, too much nitrogen and CO2 is emitted, raw materials are being exhausted and are becoming waste products at a rapid rate.

Production of biobased building materials offer farmers an alternative to livestock farming, as well as helping to address the urgent need to build more housing in a sustainable and circular manner. The Voice of Urban Nature shows that you can already create attractive architecture in a densely populated area with local biobased building materials, and is an inspiring example for builders and self-builders to change their approach.

The pavilion therefore shows that the agricultural and construction transition can lead to a cleaner, more beautiful and richer living environment. Building with hemp is not new, but has been used in small-scale projects in the Netherlands a number of times. What is new, is the application of a modular and demountable building system which, if developed further, offers many possibilities for future architecture. The Voice of Urban Nature is the first step in a larger, scalable and more permanent development, and thus it is important to experiment with and improve traditional methods, an ideology Overtreders W continually follow.