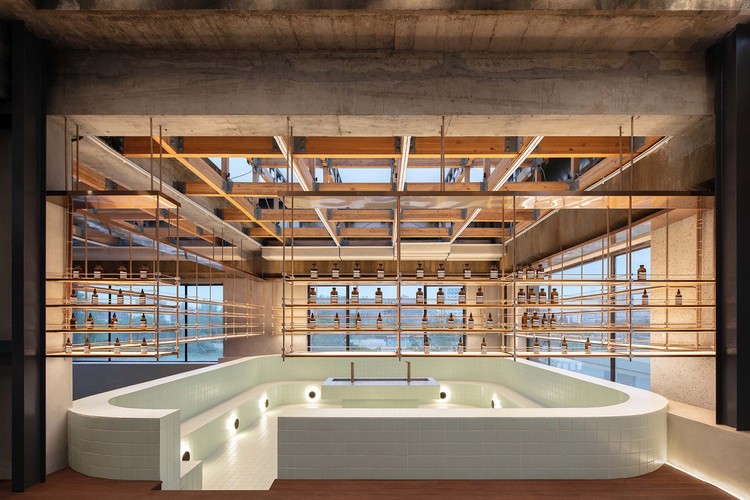 Text description provided by the architects. Shanghai Yangpu Riverside development stretches 5.5 kilometers long from Qinhuangdao Road to Liping Road at the west of Yangpu District. It is one of the largest and most well-preserved industrial heritage worldwide. Founded in 1923, Shanghai Soap Factory is located on Yangshupu Road near the Huangpu River. This renovation project is set on the production auxiliary area of ​​the former Soap Factory, south-facing to the Huangpu River, with an adjacent landscape and water wharf. The west side of the project site was originally the production area and the auxiliary area. The design takes the original wall foundation as a clue and builds a low red brick wall to restore the historical space pattern and form a semi-open courtyard. At the same time, it is connected by a floating steel plank road to achieving the changing sceneries while you walk in the project site. The last part consists of the hydrolysis building and the sewage purification pool. According to previous urban planning, the original pools of the Shanghai Soap Factory were classified to be demolished, thanks to # Atelier Z+ #, the architect in charge tried their best to preserve the original structures and installed a newly landscaped roof that redefines the way how these pools are being reused. After the renovation, the original industrial relics were given a new look that combines retro and sci-fi that is unique and recognizable.

The interior design team #Supercloud Studio# focused on ‘Soap’ as the main theme of the design, introduced a narrative of soap making as the journey that visitors are going to experience, and combined new media forms to the interior space to present a chanting theme of soap making, traversing the history and the present of the soap factory and made this project a popular public space along the Yangpu Riverside. The renovated interior space is named “Soap. Dream. Space”, a collaborative work that results from planning, architecture, landscape, interior, lighting, and exhibition design. The soap-making process is transformed into physical spaces with public arts, displays, as well as coffee, dining in the once soap-making production space, and even taking part in the production in a laboratory.

Turn the soap-making process into a spatial experience. The raw materials were collected from nature, after going through a series of procedures, become a bar of soap, and returned to nature after use. We try to express this flow in a spatial form. We chose the significant procedures from the soap-making process, and named the interior spaces after them: injecting – mixing – extracting – presenting – returning – foaming. It stimulates the curiosity of the visitors who walk through the interior spaces which are connected by five steel pipes with diameters of 2.4 meters and a variety of lengths, and each space has its own distinct theme. Additionally, the circular tubes are also key visual elements, with some of them embedded with interactive lighting devices that turn them into key transitioning spaces between the scenes.

Act 1: Awakening and Infusion —— Sprawling vegetation washed into an unknown space through a hidden entry. The Chinese character ‘Zao’ as soap disassembled, makes “Bai” and “Qi”. Baiqi Café begins from the semi-outdoor sunken space by the river, which is also the starting point of “Soap Dream Space”. A natural environment with overgrown vegetation. Raw materials are sent into the pipeline for production, this marks the beginning of our journey – the Injection.

Act 2: Mixing and Extracting —– A process of purification. The process of soap making is full of surprises – clear oil is slowly mixed with chemicals and became viscous, its color changed with different ingredients, then put into the mold, solidifies, turns into a beautiful bar of soap. The spatial formula of Baiqi Coffee attempts to restore this purification process with a somewhat magical experience.

Act 3: Acacia Island —– Island of acacia trees, a slice of nature. The other side Baiqi Cafe is the Acacia Island exhibition area. Soaps produced in different eras are placed in translucent soap bubble-shaped display shelves “grown” among the green plants.

Act 4: Dine in the Flowers —– Dine with the light and shadow of petals. The beauty of flowers is transient. It blooms, scatters, and disappears. Flowers are also used as raw materials in soaps. The fleeting flowering period and aroma are preserved in the form of soap, conveying the transient beauty into something we can hold on to. Bee Flower sandalwood scented soap is one of the most popular classics by the Shanghai Soap Factory. It was first created in 1928, based on natural sandalwood, with a touch of jasmine and citrus notes. The concept of the dine-in flower restaurant comes from the blooming petals. Enlarged abstract petals wrap and overlapping in the double-height space, creating unique light, shadow, and atmosphere.

Act 5: Soap Lab —– Handmade soap in an empty swimming pool. The process of making soap is a process of refining and refining, delicate, trivial, and requires a lot of focus. Circling up from the orange steel ladder, the roof space of Soap Dream Space, a laboratory for a hands-on experience of soap making, is a light green empty swimming pool.

In this project one travels through the tunnels of time and spaces, spaces of Yangpu’s industrial past, linked to the present, witnessing a story of industrialization.