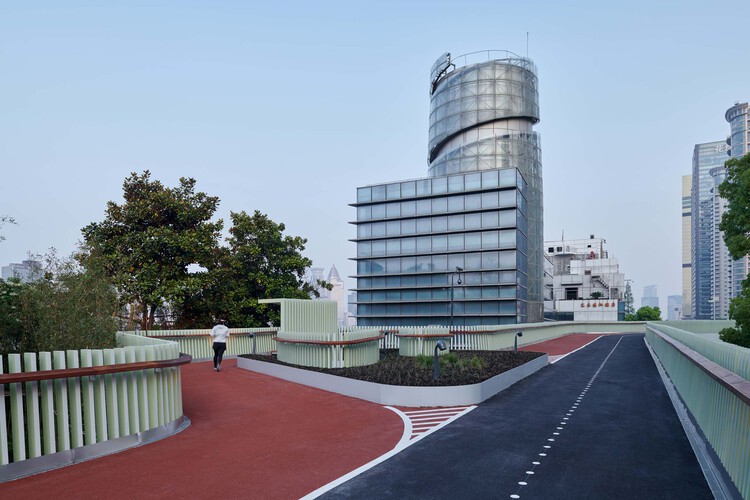 Text description provided by the architects. Dongchang Elevated Passage is a trestle bridge for only cyclists and pedestrians, in the Project on Public Space Connection of both Banks of Huangpu River, as one of the twelve bridges across the main river space breakpoints like and ferry terminals on the East Bank of Huangpu River , Dongchang Elevated Passage has been a vivid example that presents how to coordinate multi-interests, improve urban public space quality and maximize its publicity. This elevated passage goes crosses over Dongchang Ferry Terminal and borders the flourishing Lujiazui CBD area. Dongchang Road used to be the most prosperous commercial area in Pudong. The Ferry Terminal there once was the only place that must be passed for people in Pudong to get into the Shanghai center area. With the changing times, Dongchang Ferry Terminal continues to be the busiest one in Pudong Area. There is huge traffic pressure in this terminal since it carries tens of millions of passengers every year and becomes a starting station for multiple bus lines.

The urban space contradictions solved by Dongchang Elevated Passage consist of: the traffic conflict between significant numbers of commuters, heavy streams of tourists in Dongchang Ferry Terminal in the south of Lujiazui financial district, and the crowds after the Public Space Connection are opened to the public ; the closed area of ​​a yacht club on the northwest side of the Ferry Terminal has cut off the riverside public space; the rolling buildings of Ferry Terminal, Yacht Club and floating restaurants on wharf boats have become a solid wall, citizens can hardly enjoy the river view along this nearly 400-meter blocked riverside. Combining running and cycling, this elevated passage goes across transport facilities, business areas, and the public greenbelt, which concerns all land owners. Besides, designers had to find a proper solution to the complex underground conditions: traversing the Renmin Road River-Crossing Tunnel under the square, passing through water sauce pipes under the north side, etc. In the early stage of the project, we coordinated multiple interests and demands by comparing and improving various design options. The final passage was made to wind through and positively interact with existing neighbors’ buildings and site conditions.

The whole passage can be divided into five distinct and well-integrated sections from south to north. The south approach bridge section bifurcates running and cycling paths, reducing the size of the passage and winding through the dense greenbelt along the riverside. Before accessing to the front square section of the Ferry Terminal, an enlarged platform is set up protruding toward the river, which offers a good river view among buildings for the passing people to stop and rest, as there are flower beds, awnings, and chairs on the platform. The section over the front square of the Ferry Terminal protrudes towards Dongchang Road and Lujiazui Central District. There are seating facilities between running and cycling paths, making this section the widest on the whole trestle. It also provides a large area of ​​shade and rain shelter for the under-bridge square in front of the terminal and sets aside a light well between running and cycling paths.

The section over Yacht Club spans the entrance and the parking front yard of the club. This section is relatively straightforward. In the middle, it is gradually enlarged in width to provide passersby with a rest space between two paths. Besides, a big step is set to connect with the front square of the Ferry Terminal. Further north is the Fudu Greenbelt Platform section facing a seafood floating restaurant. By taking advantage of the greater depth of the site, a large overhead greenbelt platform with a public parking lot underneath is built to satisfy the three-dimensional composite request in the planning scheme of the Huangpu riverside connection of the Lujiazui area. While ensuring the two paths going through the platform, a running and walking path is designed to greatly detour to the riverside, and then a 9-meter overhanging C-shaped hollow suspension loop is formed on the platform. Although the river view is still temporarily blocked by the floating restaurant, the overhanging loop broadens it to a better extent. The landscape facilities in the middle of the platform conform to the dual features of straight and curved paths on both sides and use the gradual curvature as design language to create streamlined features.

The north approach bridge section boasts the widest city view. A large 360-degree spiral ring path is set up to invite the citizens to a fantastic urban experience in which the scenery is always changing with walking, looking up to the three famous skyscrapers in the Lujiazui center area or overlooking the Bund; Outside of the ring path, there is also a stepped footpath directly connected with the river-facing walkway to the north side, which is drawn from the walking path of the platform section. Together with the ring path, it becomes an excellent viewpoint to watch the Huangpu River sunset facing the historic BUND.

In order to avoid the river-crossing tunnel and underground water source pipes, this elevated passage is designed with Y-shaped composite piers with less land occupation as supporting structure, and the steel-box continuous girder bridge with a large span as its main structure . After careful calculation, piles are precisely dropped at the only feasible place in the cracks of the double lines of the tunnel, and three groups of Y-shaped composite piers, which are closely fitted in different directions and scattered at different heights, are used to form a tree-shaped bifurcation support structure to realize the bridge deck crossing over the Ferry Terminal front square.

The trestle slabs are arranged at tight intervals with Aluminum Rectangular Tubes. This design not only ensures a sense of security but also maintains its permeability. The front of the Aluminum Rectangular Tubes adopts the same silver gray coating as the passage body, and the side is painted light green. The such coating gives the bright a warm light sensation under different weather conditions. The elevated passage accommodates a green landscape of different scales and street seats, and an awning, where cyclists, runners, and walkers can rest. Dongchang Elevated Passage achieves a perfect integration into the city with a quite novel form. It harmoniously coexists with the existing buildings and landscape and creates a rich and varied urban landscape as well as a free and inclusive open space.