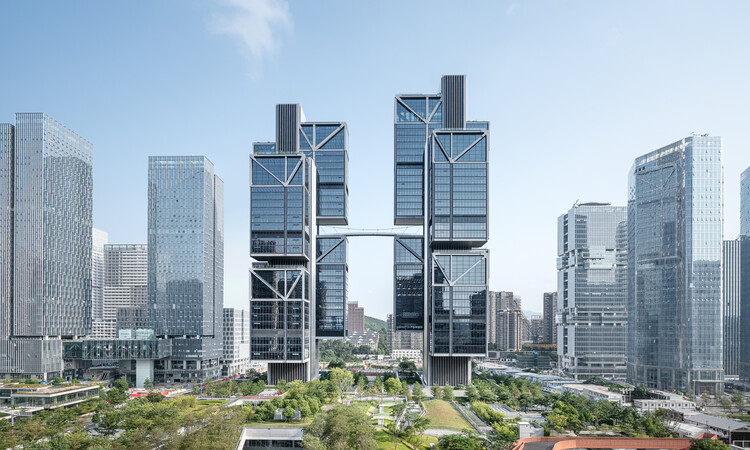 Text description provided by the architects. DJI, the world’s leader in civilian drones and creative camera technology, has opened its new company headquarters, Sky City, a cutting-edge innovation hub created in collaboration with the world-renowned and award-winning architectural team of Foster + Partners. Located in Shenzhen, China, one of the top ten UNESCO Cities of Design, the new headquarters was completed after six years of construction, adding a prominent, sustainable new landmark to the city skyline.

Drone technology has changed the way we experience the world around us while pushing the boundaries of aerial possibilities. I have enjoyed using DJI products for more than a decade. We are delighted to have partnered with DJI in creating their new headquarters in Shenzhen, which will be the company’s premier center of research and innovation. — Lord Foster, Founder and Executive Chairman, Foster + Partners

Starting with the goal of becoming the “heart of innovation,” Sky City underwent hundreds of design proposals before determining the concept of an asymmetrical suspended steel structure representative of the high-tech Foster + aesthetic Partners. Two high-rise towers – 44 and 40 stories, respectively – are joined via skybridge. A floor area of ​​242,000 square meters can accommodate up to 8000 employees with office space, research and development centers, drone testing areas, and public facilities. At 213 meters tall, DJI Sky City gives the appearance of a building floating above the ground.

The two towers are centered around two upright tree-like cores, with other volumes cantilevered above the ground. Six glass blocks suspend asymmetrically from the east and west around the three sides of the cores. The suspended blocks are carried by megatrusses and steel suspension tubes connected to round cross-sections at their corners, with the maximum overhang of the blocks reaching 21.5 meters. The structural system serves both a load-bearing purpose and exposed aesthetic element, achieving a high degree of unity between space, structure, and form.

A 90m suspension bridge connects the two towers on the 24th floor, 105 meters above the ground. This slim, lightweight bridge complements the large block structures of the towers, giving Sky City an element of agility. According to Young Chiu, the lead architect of the project, “Sky City’s volumes and structures are honest and exposed, with rich expression from inside and out. Its beauty is minimal but warm, quiet and upright, unadorned, simple and plain.”

With only the core of the building touching the ground, the overall upward lift of the volumes present a welcoming attitude, expressing the balance between technology and nature. Nearly 80% of the total site area is open space on the ground floor; the greenery on the south side of the building extends to a sloping podium garden that surrounds the bottom of the tower, and the gray space under the floating volumes brings a sense of inclusion, comfort, and quiet. The steel structure of the building sprouts from the green field, complemented by a network of rooftop gardens, exuding vitality and a harmonious blend with nature.

There is a difference in height of about half a story between the north and south sides of the site. The architects took advantage of the height difference to place the podium. The top of the podium is integrated with the ground on the south at an upward 2° angle. As the road slopes down to the north, the “sunken” podium is gradually revealed, and from the outside, the podium, decorated with natural stone panels, looks like the fortress of a castle.

The entrance of the building is set on the north side of the podium, flush with the road. Both the east and west lobbies are placed in the courtyard enclosed by the fortress, with a clear glass box wrapped in stainless steel frame, like a crystal jewel hidden inside the base of the castle. Upon entering the lobby, a graceful black pine comes into view; Together with the Zen garden landscape and the natural texture of the rammed-earth backdrop, the natural Zen and technology are perfectly combined, which makes it more tranquil and pure.

Sky City defies the traditional idea of ​​office space concept, tailoring the space for DJI to fit every DJI employee’s needs. The three volumes attached to the core can accommodate three office spaces, which can be independent or cooperate with each other, adapting to DJI’s modular team collaboration approach. In the East Tower, the four-story-high steel truss box at the top of the glass volume is the drone flight testing labs. The megatruss is the only decoration in the open quadruple-height space, which is magnificent and atmospheric, complemented by the distant view from the large window, as if it can take off at any time with the sky within reach.

The details of the building also reflect the involvement of the DJI team in the design process: from material selection to signage design, DJI applied the ideas of industrial R&D and worked together with Foster + Partners in various aspects. The materials used in the building are mainly industrial, with frosted and matte dark metal as the main color, supplemented by transparent and low-reflective glass, providing a texture that simulates industrial products, which is in line with the main tone of DJI’s products.

It took us six years to build the new DJI Headquarters, which is the result of the wisdom and determination of DJI and our valued partners. We see Sky City as a product unlike any we’ve ever made: our real home. At the beginning of a new era for DJI, we pay great attention to the growth and well-being of every employee. This starts with a work environment that is both practical and delightful. I hope that Sky City will inspire all of us to work together and scale new heights of progress, wisdom, and possibilities to develop solutions that benefit society.—Frank Wang, Founder and CEO of DJI

DJI Sky City is the world’s first asymmetrical suspended steel structure super high-rise building meters with a height of over 200. The whole building has an exposed steel structure without any decoration and uses a large amount of steel framing, metal plate, and glass to confidently display the power and beauty held in the structure itself. The industrial style is rational, thorough, and pure, and the harmonious integration of high-tech innovation and nature is a direct visual expression of DJI’s overall tonality. As for Foster + Partners, DJI Sky City is a poetic combination of architectural aesthetics, technological breakthroughs, and corporate identity, demonstrating another proficient and transcendent attempt in this field.